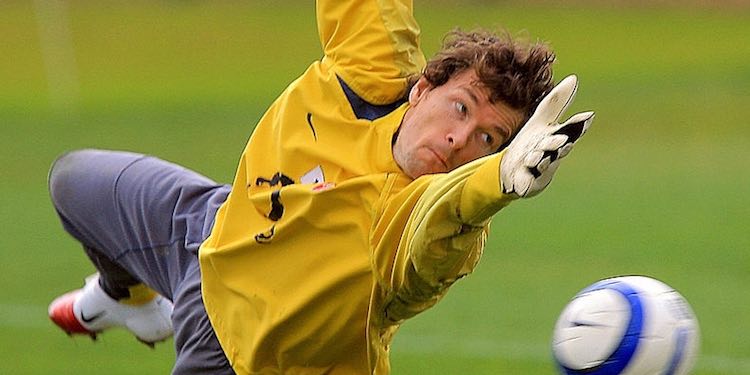 So after all the excitement of last weekend, this one is likely to be a lot less so due to the fact there’s no Arsenal.

Mesut Ozil is in town as Ireland play Germany tonight. I was there the last time the two teams met at Lansdowne Road and they were really ridiculously good, coming out 6-1 winners on the night. I was half-thinking of finding out where the Germans were staying and hanging outside the hotel with a Flamini mask on, but you know, who’s got time for that really?

England play Estonia tomorrow night with Theo Walcott staking a claim to be chosen up front with Wayne Rooney injured and Harry Kane fresh off a wonderful own goal at the weekend (one of the best I’ve ever seen in fairness). Walcott’s display against United on Sunday certainly had a few people rubbing their eyes. We know he’s capable of performing, but doing so with such vigour is something we haven’t really been used to.

Talking ahead of the game, he referenced his new-found forcefulness and conversations with the manager:

“That was one of the questions Arsène had for me about playing up front. He asked if I could be more aggressive on the pitch. And maybe he’s sensed now that I’ve had that extra aggression.

“I actually said to him: ‘Do you want me to starting kicking people?’ That was my first reaction. He said: ‘No, I’m not saying that.’ He wanted me to be more aggressive in terms of running at players, closing them down, tracking back, being there in their faces. When you are tracking back and tackling people like Schweinsteiger, a few years ago people wouldn’t imagine that Theo Walcott is going to tackle Schweinsteiger. No, it was never going to happen.”

I suppose we have to look at it a bit like the Arsenal performance as a whole. It was absolutely fantastic, but we need to see it on a more consistent basis. If Walcott can continue to play like that and show that amount of effort and awareness of the other parts of the striker’s job beyond putting the ball into the net, then he’s going to be a nightmare for the opposition. And I say that as somebody who has always been far from convinced he’d be able to do that, and as someone kinda suspicious that he’s talking about having ‘extra aggression’ like he got a deal on a big jar of it from Aldi or something.

Credit where it’s due, the Theo Walcott we saw against United was far, far removed from the one who has, in the past, allowed games to pass him by. But it’s making sure that Theo Walcott doesn’t surface, and building on what he did on Sunday, that will be key to his future in the centre-forward position.

The display against United was, in part, sparked by the rivalry, and the desire to put things right after what had happened against Olympiacos. There was a surfeit of motivation that undoubtedly played a part in how we performed, collectively and individually. There won’t be the same intensity going into the game against Watford, for example, but we need to see the same ruthlessness and endeavour. And then in the next game, and so on.

And speaking of aggression, I loved this from Francis Coquelin who spoke about his first day at Arsenal when he was over as a trial

“When I left Arsenal I wasn’t sure whether I would come back. I remember my first training session with the first team and it was war. I said to the boss at the door when I left, ‘This is different!’

“I remember seeing two players fighting in training, and I had an argument with Jens Lehmann as well and I was thinking, ‘Wow, where am I?’”

The image presented to the world of training is a happy place where everyone is super-friends and smiling and laughing. The reality is that sometimes things get a bit heated. Players squabble and scrap and it’s all part and parcel of football. And that Jens Lehmann was involved is no surprise at all. Not for him the ‘Welcome to Arsenal young fella’, training was very serious business for the German.

There are some players who train as they play. That means 100% concentration and commitment in every single challenge. Perhaps when Arsene Wenger writes his own book one day, or one of the players in the team does his, we might discover that one or two training ground injuries that kept players out of games in that period involved Jens in some way or another.

In the book Together that Andrew Allen and I did, Jens’ training ground stuff came up in a couple of the interviews we did. This with his understudy that season, Graham Stack:

We had a cracking relationship and a good understanding, but I remember once I had a race with Jens on a Friday and the whole first team were watching. I ended up running backwards for the last ten metres and laughing at him.

I kid you not; he wanted to kick my head in. He lost the plot completely. He was so competitive. I always knew I was quicker than him, me being a kid and him being an older man, but the boys were in hysterics when I beat him. His reaction was priceless; he flew off the handle and went absolutely mental. He was like that in everything we did, we were very competitive but that helped him.

He didn’t want to be beaten by a twenty-two-year-old.

And this from Danny Karbassiyoon:

To give you an idea of what Jens is like, one day I stayed after training and was taking shots at him along with [keeper coach] Gerry Peyton. He kept challenging me to bet on each shot, saying: ‘double or nothing, double or nothing’ and I kept scoring. He just wouldn’t stop. I got up to like £2,000 and he wouldn’t stop until he saved it. Then he stopped. And he wouldn’t give me any money! That’s just him. He couldn’t stand that a kid was scoring past him.

Brilliant! So, the idea that a teenage Francis Coquelin, on his first day at the club, keen to make an impression, was involved in a row with Jens is the very least you’d expect. Welcome to the real world, young man.

Right, not a lot else happening this morning. Anything that does stir you’ll find over on Arseblog News throughout the day.

ps – The last few hardback copies of Together are all signed and available in The Tollington for just £15. After they’re gone, that’s it. The limited edition becomes ‘collector’s item’.