Arsene Wenger regards a player’s best position as a totally malleable concept, dependent entirely on how the team is balanced. His conversions of Thierry Henry into a central striker, Lauren into a right full-back and Kolo Toure into a centre half are famous examples of his fondness for matching a players attributes to a new role. However, these are extreme cases, Wenger, like any manager worth his salt, will shuffle his pieces around the board in search of collective balance. Contrarily, it is often the critics that worry too much about individual egos when this shapeshifting takes place. The overall plot is of greater import to the stage direction than the characters in the play.

Theo Walcott’s long awaited conversion into a central striker has seen a meeting of minds, with both player and manager eager for it to work, but with diametrically opposed motives. In the 2014-15 season, Olivier Giroud’s pleasing winter form had begun to dry up by spring. Basically, because opposing teams had sussed him out. Sean Dyche’s Burnley were the trend setters in Arsenal’s 1-0 win at Turf Moor in April, assigning both of their centre halves to mark the Frenchman. Assured that he does not possess the pace to spin in behind, centre halves simply crowded him out, suffocating his lovingly crafted personal brand of flicks and dinks on the edge of the penalty area.

It became predictable. It’s been obvious for a long time that Wenger’s preference is for a much more mobile central striker, he just hasn’t been able to find / successfully purchase the ideal candidate. In Theo Walcott, Wenger certainly has a more mobile striker, but he also has a player desperate to laminate his centre forward business card. Arsene once said of Ian Wright, half-jokingly, half-lamentably, “All he was interested in in training was finishing, he didn’t want to do anything else. Give him a ball, a goal and a goalkeeper and you had a happy Ian Wright.”

I think Walcott’s drivers are very similar. For years, out on the right hand side, Walcott’s faulty technique, occasionally wayward control and passing and his bouts of defensive narcolepsy have barely improved since his teenage years. The only elements of his game that have dramatically improved since his fresh faced adolescence are his runs in behind defenders and his finishing. Walcott has played less than 20 top class games as a centre forward now, yet we are seeing a rapid negotiation of the flaws that prevented this genesis from happening earlier in his career.

The idea of being a striker lights a fire under Walcott’s arse in a way that being a right sided forward did not. He fights for lost causes at centre forward in a way that he simply never did on the right. On the flank, too often he was brushed off the ball with consummate ease. One could almost see him making a mental shopping list as another left-back trotted happily by him. Upfront, he seems a character transformed. Lest we forget that Walcott’s cruciate ligament injury was a symptom of his haring back from centre forward to help out Bacary Sagna by the corner flag. A feat that must have made Sagna reaching for the smelling salts in disbelief.

Whilst his flaws became frustratingly familiar calling cards on the right, upfront, he is smoothing his rough edges with gusto. It is difficult not to conclude that this is a symptom of desire, of ambition. He has clearly dedicated himself to improving his ability to shield the ball at centre forward. His movement is no longer just a matter of raw pyrotechnics. His pace remains a potent weapon in his attacking arsenal, but even leaving that aside, his movement has become really intelligent. As @licencetoroam observes, he’s developed a pleasing knack of running laterally for a few steps before bursting in behind centre halves.

He is much more adept at finding pockets of space, creating room for himself and others. After the Stoke game, Wenger interestingly suggested that Walcott was the ideal striker to face sides with heavily manned defences. This is because Theo has begun to appreciate the altruism in his movement and how it can create space for teammates, where previously I think he had more of a one track mind when looking to snake in behind a full-back. In turn, the team have taken a step towards Walcott, with the likes of Özil and Alexis slowly grooving to his tune.

The presence of Giroud gives Arsenal’s defenders and goalkeepers an out ball in times of trouble due to his aerial prowess. Walcott does not offer the same airbag when Arsenal’s deeper players are pressed in possession. However, slowly the team have discovered that sending the ball low into the channels for Theo to chase can be just as viable a safety net. (Besides which, Alexis is pretty handy in the air). His average position map for the victory over United shows a heavy bias towards the right side, as he looked to make meandering runs from right to centre. This enables Alexis to move in from the left and take up much more central positions. 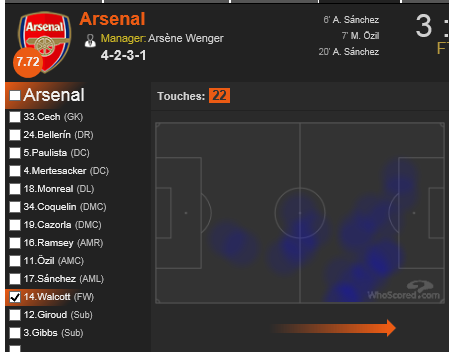 The Chilean is often used as a device to supplement Theo’s lack of physicality and aerial ability. But as we saw with Alexis’ second goal on Sunday, Walcott ghosting over towards the right hand side causes defences to shift over and drift towards him, leaving more space for Sanchez to cut in from the left. Alexis’ first two goals against Leicester, his header against Olympiacos and his second against United owed much to Walcott’s gravitational pull. (Chamberlain’s goal against Chelsea in the Community Shield was similar, though that move swept from left to right). And whilst Alexis is occupied with supporting Walcott as a second striker, he has less of a tendency to drop deep and become involved in the build-up play. 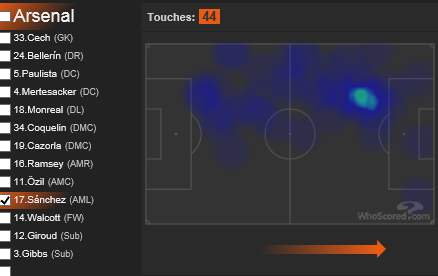 This offers a Brucey bonus because frankly, building the play is categorically not his strength and in Özil and Cazorla, Arsenal have players much better equipped to supply the bullets. Alexis is playing closer to goal which gives Özil more space to roam into and two pacey passing options when the ball is under his spell. Mesut managed three shots against Manchester United and four against Leicester as he revelled in the space Theo’s movement gave him. Walcott only touched the ball 22 times on Sunday; seeing less of the ball than any other player on the pitch. Even United right back Matteo Darmian, removed at half time due to a bad case of twisted blood, touched the ball 29 times. Walcott also only had one shot on goal, a wayward attempt as it turned out.

But it was his movement and his desire that made him so effective. I was simultaneously surprised and delighted to see him cut the ball back for Özil for the second goal. A few weeks ago, I think, in his desperation to prove his striking credentials, he might have taken the shot on. Now, there seems to be a degree of comfort and self-assurance taking hold of his performances and that will really please his manager, who always encourages his players to play in a collective manner. Walcott’s motivation may well be powered by a personal desire, but continuing to play with philanthropy will offer his coach compelling proof of his suitability.

We should be cautious about inaugurating Walcott into the centre forward hall of fame just yet, of course. There are challenges on the horizon. The Gunners have really only just worked out what they are doing going forward, so their opponents have yet to cotton on. We are in the honeymoon hinterland between an attack catching fire and opposing managers working out where the fire blankets are stashed. Giroud was eventually thwarted after a period of excellent form last season and Walcott’s machinations will come under greater scrutiny. With every passing match, he leaves a breadcrumb trail for his opponents.

He is beginning to confound doubts around his effectiveness against packed defences, able as he was to find the handbrake against the parked buses of Stoke and Olympiacos. Theo also does not allow misses or mistakes to unduly trouble him. He has belief in his ability, but it’s not an Ibra-lite concoction of swagger and bluster. Walcott’s is more of an unintentional and unschooled aloofness. His imperviousness to criticism seems to stem from a lack of awareness of negative vibes around him. No matter how hard it tries, doubt just does not seem to be able to penetrate his skull and lay its eggs in his brain. It’s a kind of ignorance that can help him continue his trajectory to striking bliss.