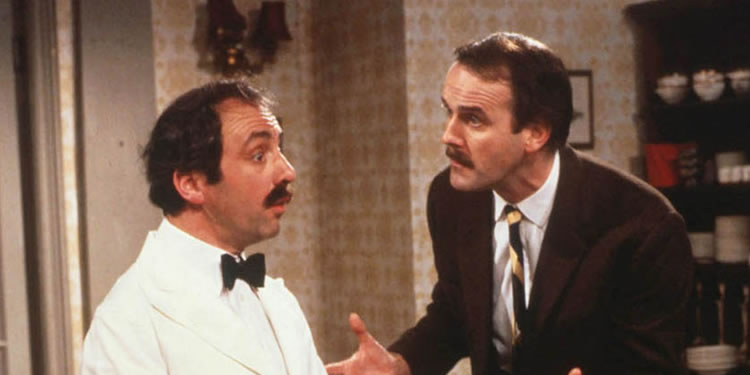 Hello, a Saturday round-up for you as, of course, we play tomorrow. Apparently there was football on last night, which is really weird. Man Utd beat Aston Villa 1-0 but I watched episodes of Always Sunny in Philadelphia instead (“Champion of the Sun”).

I dunno, I guess it’s something we’ll get used to. We have Super Sunday, Monday Night Football, Friday Night Football, soon it’ll be all football all the time on the football channel and the TV companies will saturate us and drown us in football and we’ll die because of football and then there’ll be nobody left to pay for the subscriptions or, quite literally secondly at this point, go to the games.

I’m not sure if it quite applies, but there’s a reason why Fawlty Towers remains a classic. It’s because they only ever made 12. Had they gone on for another 8 seasons, bringing in guest stars like Tom Selleck and Brad Pitt, then it probably wouldn’t be considered as good.

Is it just me or does Premier League football increasingly feel like a long-running sitcom that has to bring in these famous guests to keep the interest up? Celebrity pundits, increasingly high profile signings for ludicrous money from the biggest clubs, players going to mid-table teams because the money is simply too good to turn down, and now that it’s in syndication it’s on everywhere all the time.

Anyway, from our point of view there are a few bits and pieces going on. Arsene Wenger is puzzled by Danny Welbeck’s absence, with the striker set to be out for at least another three weeks because of his knee problem. The issue appears to be that nobody quite knows how long it’s going to take:

It is much slower than expected. It was a bone bruising at the start. You think that it will be quite quick. He is an important player for us and the fact that he is not available is a bit of a concern.

There’s no surgery required, apparently, but sometimes that can at least put a time-frame on things. Drunk him up on cheap whiskey, whip out the scalpel, flay the chap open, repair the wotsit, stitch him up with some catgut and then you just wait for it to be all better. He’s certainly someone we could do with at the moment, the attack to defensive options ratio is a little too skewed towards the latter on our bench, but quite when he’ll be back in action is anybody’s guess it seems.

Meanwhile, the manager is backing Alexis Sanchez to improve on his quite stellar first season at the club. Having trained on his holidays to ensure he came back ready to be involved as quickly as possible, he’s praised the Chilean for the kind of attitude he feels more players should have:

He works extremely hard in every single training session to show that he is ready. I think what he does is, for me, normal. It is what everybody should do. You wonder if he has created a beach at home, and runs along the living room! He is a hyperactive guy.

This season, he knows what is expected from him, and he will do better than last year. He is very ambitious, Alexis. He wants to win. He knows he won the FA Cup, he wants now to look to get more. And he is a winner.

Well, if he can improve on 24 goals then I’m all for it. We looked like a team that needed a spark against West Ham and even though his touch when he came on was that of a man just back from holiday, twice he got himself into good positions that, with a bit more fitness and readiness, you’d expect him to score. It’s impossible to think he won’t start against Crystal Palace tomorrow, the team needs him – but it’s also important that we don’t feel like we’re reliant on him either. Balance required there.

Speaking about transfers, the manager said the West Ham result didn’t make him any more or less willing to go into the market:

We are as open after that bad result as we were before. We were working very hard and we are focused to do what can strengthen our squad. The availability is not big. If we find somebody anywhere who strengthens our squad then we will do it.

The availability issue is the key thing though. Finding the players is one thing, the other club being willing to sell another, and it does feel like this summer market needs a big move to go through somewhere to start the big transfer merry-go-round. As I said on the Arsecast this week, it does feel like if anything’s going to happen, it’s going to be late in the window because inevitably things will start moving then, the domino effect of one big transfer meaning one club has to sell to recoup etc etc.

Until that happens, if it happens at all, we do have to concentrate on what we’ve got more than what we want, and Wenger is right to suggest that the players he has are capable of beating West Ham at home:

When you lose a game you always get that kind of demand, we have to be honest enough and ask, ‘Could we have won the game without any addition?’ and I would say yes.

Quick snippets: despite rumours to the contrary, the boss has confirmed that there’s no new deal on the agenda for Nacho Monreal, while Mathieu Flamini, linked with a move to Galatasaray/anywhere at all, has no intention of leaving apparently.

Right, that’s just about that. If you haven’t yet had a chance to listen to this week’s Arsecast, you can find it here or here. A few people emailed asking if the download option was gone with the new system but it is not. Just look underneath the player on the Arsecast post, and you’ll find a big DOWNLOAD link. Use that!

Thanks for all the feedback, have yourselves a good Saturday, more tomorrow with a full preview of the Palace game.