Felicitations and salutations, chums! How do you do? Seems like simply yonks since my type reached your peepers, and much has happened since then. Not least, a four-week laudanum and cocaine binge that left me a weeping, destitute wreck and resulted in the suspicious deaths of three debutantes, one of whom perished under the weight of an 18 hand stallion. One does have to do something in a summer free of our beloved soccer, and as one of this country’s idle rich, I find that pretty much anything is possible with the right sort of money. As the old saying goes, getting giggles takes gargantuan guineas.

In the world of Woolwich, much has changed. We have won three trophies in pre-season. Defeating Everton 3-1 in the Barclays Asia Who Is the Greatest Team the World Has Ever Seen Trophy, thrashing Wolfsburg in the Emirates World Cup, trouncing FC Chelsea 2003 in the most coveted trophy in the western world, the Football Association Community Shield. Sadly, that promisingly bountiful pre-season came to a juddering halt in our last warm-up game of the summer against Ironworks, the less said about that the better.

Suffice it to say that we hope upon hope that our solitary summer acquisition, Harold ‘Harry the Helmet’ Church (below) recovers from his pre-season nerves for our opener at Palace. We pray that tomorrow’s first game of the new season, the south London derby, results in the start to the season that we are all hotly anticipating. I for one would love to see Pardew’s face, constructed as it is entirely from Indian rubber and melted cheese, form a frown come the final whistle. 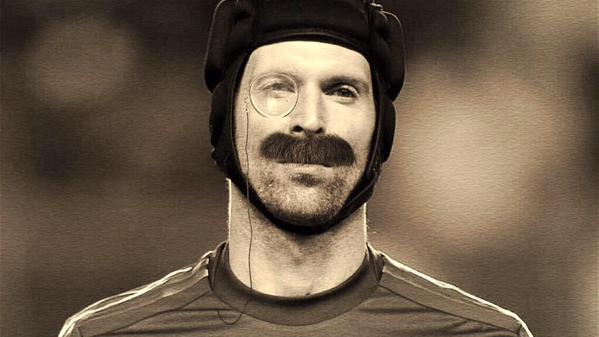 In other news, Mr. Saunders, via the granny rule, won the Association Football Cup of the Southern American Colonies with Chile United. Many dozens of irksome self portraits of the chaps were taken, made more irksome by the fact that that bearded psychopathic meatpole Mr. Keane rightly pointed this out. Mr. Di Maria made good his escape from Herr van Gaal’s Manchester United, from here on in referred to as the Salford Dutch Oven, owing to its claustrophobic, unhealthy airs, and general stench of ordure. Why anyone would prefer the delights of the north west to the pleasure palaces and dancing girls of Paris is beyond me. Perhaps Mr Di Maria decided he liked food and culture. Most pleasing to see Herr Van Gaal adopting the old Dutch transfer scouting technique known as speld de staart op de voetballer, or ‘pin the tail on the footballer, whereby the manager in question affixes photographs of his top 500 transfer targets, his assistant manager, in this case Mr. Ryan ‘Family Man’ Giggs, blindfolds him, and whichever footballer he pins a tail on has the dubious honour of signing for Manchester United.

When mocking the transfer activity of our competitors, special mention should of course go to the Abu Dhabi Vulgarians, who supplied many belly laughs when they made four consecutive “final” offers for that little shit Sterling. I would love the telephone number of their chief negotiator as I have a lovely barely used 18 hand stallion that I need rid of in short order.

Woolwich has had quite the clearout this summer. Some of the highlights would be Roger Matheson defecting to the dangerous anarchists of St. Pauli. Ainsley Maitland-Niles, of the Shropshire Maitland-Niles’, is off to Ipswich, hopefully taking his troublesome mater Binky Maitland-Niles, also known as Baroness Shrewsbury, with him.

Mr. Lucien Ponsonby is off to the lands of the crusades. Ever since the left foot of Alfredo Di Stefano was grafted onto a lazy non-league player, the writing has been on the wall, and that writing said “thanks for your lovely smile, but it’s time to head for Turkey, you turkey”. Our Mexican left-back, Carlos Juarez (below), returns to Ironworks. 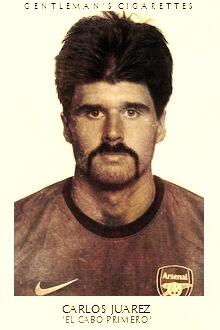 Sesley is off to make half of Rome more nervous than a long tailed dog in a room full of rocking chairs every Saturday. Chubby Atkins has gone to somewhere called ‘Hull’. Joseph Sangley is currently knocking elbows with the opposition in Amsterdam. Mr. Stephen Knabbley is perhaps the most unfortunate of the lot as he has headed up to West Bromwich Albion where he shall be forced to endure the most fearsome initiation ceremony in world football, known as ‘Talk to Tony’, where you have to talk to Tony Pulis for one grim and hellish hour.

And let us not forget the most melancholy of this summer’s departures. At the end of season last, Mr. Windsor lifted a dustsheet in the attic at London Colney and discovered a long-lost midfielder, Abraham Dolby. Once thought to have been boiled and eaten by headhunters in Borneo, it seems he had merely retreated to the dusty roof-space, hoping never to have any one look at his knees again. “Please, no more doctors,” he cried. Mr. Windsor, ever generous, packed him off to a retirement home in the south of France.

He should be largely remembered of course for this: 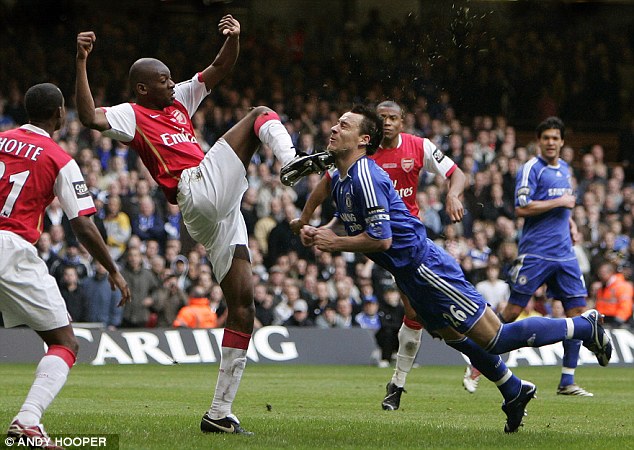 And once more in close up: 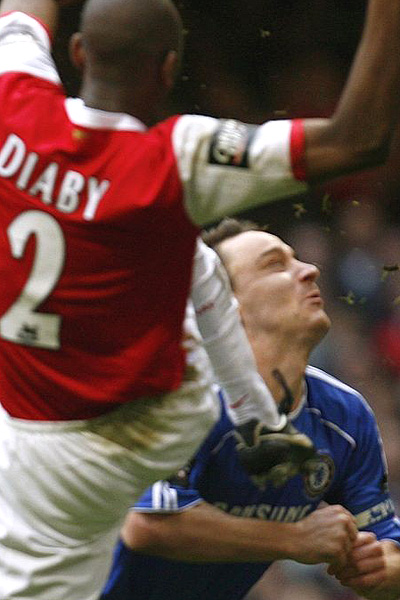 Splendid stuff. Until next week, chums!