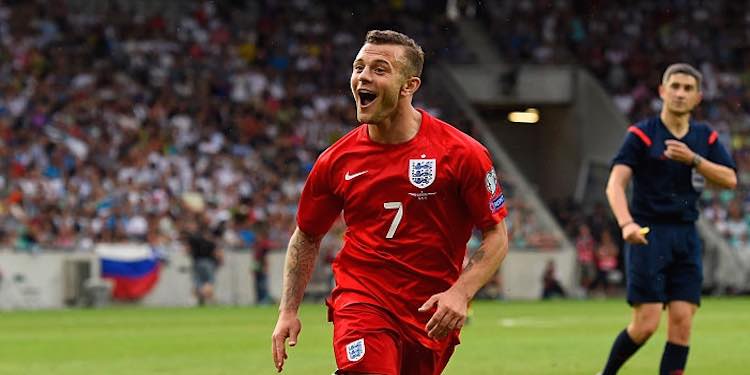 Good morning, and welcome to a brand new week – in the middle of June. How the hell did that happen? The first six months of this year have been a blur for me, both work and otherwise, so for it to suddenly be June is almost surreal.

Yesterday’s early morning complaints about the weather were most definitely heeded, with it turning into a blistering hot summer’s day in the afternoon, and me ending up a little bit sun burned. I’ll take shivering, crappy mornings like yesterday all summer long as long as they turn out like that.

There’s nowhere else to start today than yesterday’s game in Slovenia, which England won 2-3, thanks to two absolutely outstanding goals from Arsenal’s Jack Wilshere, his first goals for his country. I didn’t watch the game, what with the weather deciding that it wouldn’t be a total bastard after all, but they really were both blistering finishes, each time with his left foot, and into almost exactly the same spot. You should watch them yourselves, but the second one in particular was just brilliant. The goalie just stood there.

I can’t speak for his performance in general myself, having not watched the whole thing, but it’s wonderful to see him getting back into the groove so well, and it’ll be interesting now to see how the FA handle his charge for stating the obvious. I’m not sure it’ll make any difference really, but we’ve seen England’s best players get treated lightly in the past before when up on misconduct charges.

I thought Jack’s performance in the second half was top class, controlling the midfield with the sort of performance we have seen from him for a while now.

If we can keep him fit and he can get plenty of league and international matches, he is at a young age and we would like to think we have got a very good player going forward.

Gary Lineker was positively gushing, saying he thought at least one of Jack’s goals was worth of England’s top ten ever (I’m going to assume he meant the second).

Jack himself was quite modest in his reaction:

It’s obviously nice to get my first goals for England, they have been a long time coming. I probably wouldn’t have had a shot for the second one if I hadn’t already scored, but after I’d scored one I had more confidence.

I have said that I need to score more goals, it is something I need to add to my game. Frank Lampard, Steven Gerrard and Paul Scholes have done that for England.

That’s all well and good, Jack, but don’t forget that’s a supreme trio of thundercunts right there, so don’t try to emulate them too much.

Moving on, and it seems Everton are interested in taking Lukas Podolski off our hands, though the forward himself has played down speculation, saying he still feels he has something to offer the club:

Things can always change, but if needs be I will remain at Arsenal next season. They are a great club and I think I can help them.

I like Lukas. His enthusiasm is infectious, and I absolutely love those “fuck you” goals he scores, as I like to call them (of the same ilk as Jack’s second last night). That said, the manager obviously doesn’t trust him, and his effort and work rate aren’t exactly a shining example to the rest of the team, so as I said the other day, it’s extremely hard to imagine him staying, or even where he’d fit in if he did. At his age (30), he surely wants to be playing, and he’s clearly only going to be bench fodder for us at best.

Finally for today, Mesut Ozil has been talking up the Premier League:

I would recommend any player to come to England. The Premier League is the best league in the world. Here there are not only two teams fighting for the title but three or four and every team can beat any other team.

The opponents never give up, even if they are 3-0 down. You are challenged all the time, as a player as well as physically. Mats and Benedikt have the qualities to make a mark at a big club here – if they want to, and that is obviously up to the individual to decide.

Ozil’s clearly relished the physical challenge of the Premier League, having bulked up substantially since he joined. If he can continue to combine that physical strength with his incredible range of passing, touch, and vision, he can be even more amazing than he already is – and he is already pretty amazing. Like Blogger, I simply don’t understand folk that can’t appreciate what he brings to the team. I guess people might think a player we paid such a gigantic fee for should be scoring screamers like Sanchez’s in the cup final, or indeed Jack’s last night, but that’s just not what Mesut’s about. He keeps things ticking over, probing, mesmerising, making and finding the space to play the killer ball, and it’s absolutely crucial to the way this Arsenal team plays.

He’s also sure to have another comment seized upon, talking about the freshly unemployed Jurgen Klopp, someone many people see as an ideal replacement for Arsene Wenger when the time comes:

He is a big talking point over there – in the papers but also among the players. A few of my colleagues have asked me about how Klopp works. I haven’t had him as my manager but his record speaks for itself. He is a big personality and I am impressed by how relaxed, yet professional, he can be.

I’m sure no one will pick that one up, oh no.

That’s your lot for this morning. I have an insane day of back-to-back meetings to go to, all of which will be extremely tiresome and dull, but I’m actually only in the office two days this week, so at least there’s that.

Have yourselves a good Monday, keep up with anything breaking over on Arseblog News, and I’ll catch you again tomorrow.