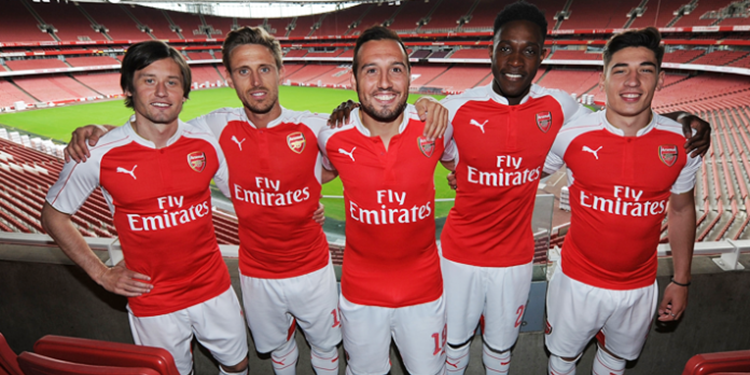 We’ll start today with news of the new kit from Puma. As you can see from the above image from the official site, all the key ingredients are there: it’s red, and white, and there are Arsenal players modelling it, all of which are good things and generally to be expected at a new Arsenal home kit launch. Speaking about it, the smiliest man alive, Santi Cazorla said:

Our fans are incredible and play a really big role in our performance and motivation. Being at the Emirates this evening and seeing so many of them chanting and supporting us was really great. There was so much passion in the crowd, it reminds us how lucky we are to have these supporters. The kit has a lovely design, classic like an Arsenal kit should be with some very nice design features.

I expect some folk might complain that it isn’t just the sleeves that are white, but I like it. It’s described as having a “grandad” collar, though me not quite understanding what that is probably says more about my sense of fashion than the kit. It also has gold piping and trim round the collar, which is all very exciting.

By all accounts it was quite the event at the Emirates, with lots of people turning up, and the club putting on a fair old show, as Santi says. Good to hear, even if ultimately it’s all in pursuit of the mighty dollar. I believe you can watch it on the Arsenal Player if you have a subscription.

You can read a very interesting interview with Nacho Monreal here, over on Arseblog News, where he talks at length about his form, injuries, playing for Arsenal, and how James Milner is way better than David Silva or Sergio Aguero.

On to transfer nonsense now, and depending who you believe, we’re either on the verge of signing Petr Cech from Chelsea, or, in the same story, about to see the deal hijacked by PSG. You pay your money and take your pick, I suppose. It’s thought Cech would prefer to stay in London, having his family settled there, so maybe that gives us an advantage. I’m still not convinced a new goalie should be top of our list, but perhaps it’s not – perhaps it’s just the story that currently has the most traction.

Meanwhile, in what risks turning into a Sebastian Frey style saga, there are reports that we’ve revived our interest in Schalke 04’s Superman-villain-named Julian Draxler, and in the most vacuous pair of non-stories ever, alleged target Porto’s Jackson Martinez has declared himself as close to signing for anyone else as for AC Milan, and will apparently make up his mind on his future in the next few days (cool story, bro), and Benedikt Höwedes, also from Schalke, has decided to stay with the club according to their sporting director. So that’s that then.

Next up, and following his fine goals for England on Sunday, not content with being compared to such monumental arseholes (though admittedly quite good footballers) as Steven Gerrard, Frank Lampard, and Paul Scholes, Jack Wilshere has now inevitably been cast as the new Paul Gascoigne by saying he’s not the new Paul Gascoigne and that he was just inspired by him by watching a film about him:

It did inspire me. You could tell by the way he played for England that he didn’t feel any fear. He was over that. Sometimes when people play for their country I think there is that little bit of fear and pressure. But he just wanted to go out there. He felt at his best when he was playing, with the ball at his feet, and I sometimes feel that way.

Without wishing to make him sound like a contemporary dancer, Jack went on to talk about his interpretation of the deep lying playmaker role in which Roy Hodgson has him cast:

A big part of the role is that when we’re attacking, I’m backing up play. You’re not defending at that stage, but you are trying to stop the counterattack if it happens. You’re basically trying to read the position where the ball will drop. You can go to the edge of the box and the ball might drop to you. But it’s the balance that’s important. Sometimes you have to shield and sometimes you have to press.

All of which sounds remarkably like the role Santi Cazorla has fulfilled for us this season, and you have to wonder if watching Santi has helped Jack. If so, good, because Santi’s a wonderful player, and if Jack could start to take on that role for Arsenal as well as for England, we’ll hopefully be in good stead for when Santi inevitably decides he wants to see out his playing days in warmer climes.

Also, if it is the case that Santi’s displays for Arsenal this season have helped Jack’s development in that role, it poses an interesting question for those people that say foreign players in the Premier League is bad for England. If it is the case Jack has learned from Santi, surely having players like that around is actually good for England? Anyway, it’s one for the arses if you fancy it.

Tomas Rosicky has said he wants to fight for his place in the Premier League:

My focus is here. I have another year left on my contract. It was a difficult time for me. It’s never easy when you are not playing at all and you end the season in the stands.

Is there a frustration? Of course there is a frustration because I think I can still help the team to be better.

On the other side I have been here nine years and I have always said I love the club. I don’t think I have to prove to anyone how I feel about Arsenal and how loyal I am to this club.

Of course it’s not going well for me at the moment. It’s disappointing but I will not give up easy. I will fight.

There was a moment after the cup final where Tomas was standing alone in his tracksuit, almost in the middle of the field, way away from the group celebrating with the trophy and the fans, where it seemed like he was in another world, and I really felt for him at that point. I hope he can find his way back to giving the manager a real headache about selecting him, because while I do think injuries have obviously taken their toll on his Arsenal career, even at 34 he brings an energy and bite, combined with an eye for a pass or a shot that’s occasionally lacking in our midfield.

While we sat at Stansted, waiting for our delayed Ryanair flight back to Edinburgh, Blogger and I watched the FA Cup Final in full again, and there was one moment in the first half in particular where there was a pass Ozil made that really only very few footballers could see (and we certainly couldn’t) that was a perfect example of what he describes. He’s really very special – and not in the Ralph kind of way.

That’s your lot for today. I shall be back with more waffle tomorrow.

Update: some more images of the new kit: 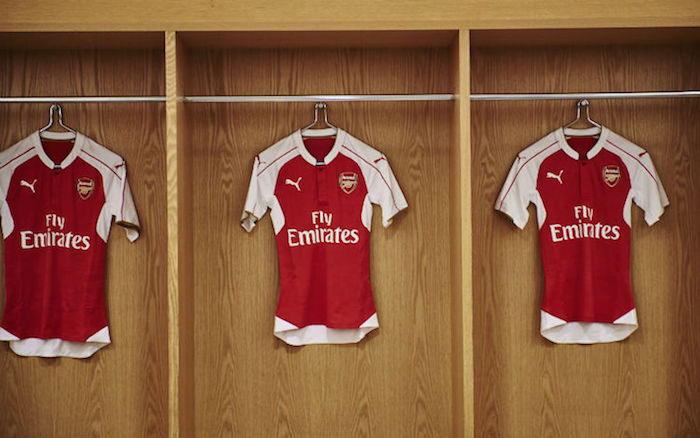 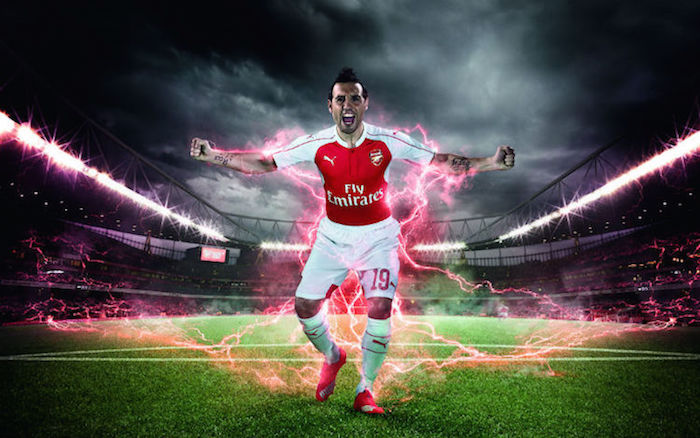 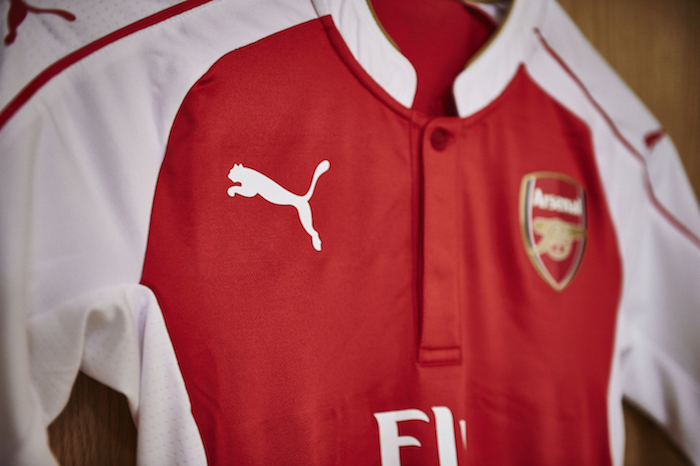 If we’re playing with electricity coming out of our shirts, I don’t see how we CAN’T win the Premier League next season.