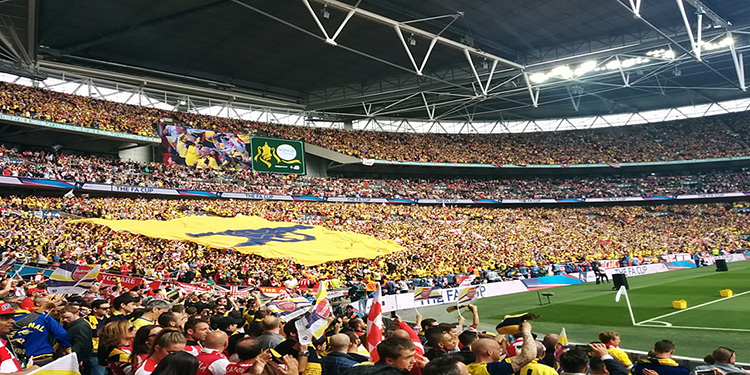 We’ll start this morning by saying that this kind of weather, and in particular temperature, is entirely unacceptable for the month of June. Mrs Tom and I went for a wander round nearby-but-never-previously-visited Tantallon Castle yesterday, and it was fecking freezing – though mercifully dry – but I’ve woken up this morning shivering, having had the window open overnight, and it’s pissing it down outside. Anyone would think this was Ireland and not Scotland (oh, etc). I might even have to put the heating back on.

There’s really very little Arsenal news today, as far as I can see, so I thought I’d start off by telling you about some of the latest bullshit being used to sell newspapers and as clickbait for people desperate for transfer news, move on to some reports on a couple of Arsenal-related internationals played yesterday, and then talk a little bit about my own memories of the Cup Final.

First off, the Independent reports that another paper, whose existence I refuse to acknowledge and for whom the term “paper” affords them underserved credibility, think the club are confident of securing the services of that bloke in nets that wears the not-silly-enough-hat-from-Chelsea for £11m next week.

Like Blogger, I’m not entirely convinced a goalkeeper should be top of our shopping list. I know some people remain unconvinced by either of our current options, and that in particular, Szcesney’s time with the club is done after the smoking incident and that he was always suspect anyway, but for me I think both him and Os-pi-na have done enough to merit a bit more loyalty and time to establish themselves. I know plenty of others think otherwise, and I suppose if you want to win things you have to be ruthless in these matters, but in my opinion, possibly another striker, and certainly cover for Francis Coquelin (or a player to complement him) are higher priorities. Still, I’m afraid I’m firmly of the opinion that the manager tends to know best, and if he thinks the bloke in the not-silly-enough-hat-from-Chelsea is the way to go, then fair enough.

Next up is Theo Walcott, with some comments to the official site about the Emirates and the direction of the club that seem to remove any lingering doubt that he wants to stay and will finally sign da ting:

Highbury was a fantastic arena – it was so passionate and everyone was together. We’ve been at the Emirates for nine years and that’s starting to be like a big fortress and starting to feel like Highbury was.

There’s been a lot of special moments there. The amount of money that has come in to the club now and the players we’ve spent it on is the difference to what it was years and years ago.

The fact that we always qualify for the Champions League has never changed and that’s great. But it’s been a long time coming. It’s a massive club – it always will be a big club and I think it’s getting bigger and bigger.

The club is going to move on from where it was. We had some fantastic years just before I came here and I think we are going to start to get those back, definitely.

Getting back to those years just before Theo arrived (i.e. the invincibles – yes, it really has been that long) sounds great to me, and would be very welcome.

International watch now, and a number of Arsenal players were involved with their countries yesterday. Mesut Ozil had, by all accounts, an excellent game against Gibraltar, setting up three goals as Germany unsurprisingly crushed the minnows 0-7. Lukas Podolski also played, coming on early in the second half (though referring to him as “an Arsenal player” is surely only an administrative anomaly at this point). Olivier Giroud and Laurent Koscielny both played in France’s defeat to Albania, and Wojciech Szcesney assumed his regular Premier League position for Arsenal on the bench as Poland spanked Georgia 4-0. On Friday, Aaron Ramsey completed 90 minutes for Wales in their win over the Belgians, Tomas Rosicky’s Czech side lost 2-1 to the mighty Iceland, and Alexis Sanchez played as Chile, competing in the Copa America, beat Ecuador 2-0.

Finally for today, the cup final. I won’t go on and completely repeat Blogger’s post from the day after, but what a day that was. We started out in the now traditional pub in Harrow, and made the short trek over to the Tube after a few drinks had been taken, and lots of songs about a beret and been sung (there is only one beret, after all). The walk up Wembley Way felt a little different to last year. Perhaps being the holders took the pressure off a little bit, or perhaps via the wisdom of (literal) crowds we all knew it was going to be a good day, but there was definitely less tension in the air. Having taken our seats, it was only really after the nonsense build up that happens before these big events had finished, and the teams took to the field, that I really felt my stomach turn over with nerves – not that they lasted long.

It didn’t feel quite so much like it during the game itself, but we battered them. An early challenge on Alexis had us screaming for a red card, as Tim Sherwood’s game plan quickly became apparent. The first half was largely one way traffic, and finally Theo’s wonderful volley got us the reward we deserved and the place went berserk.

I got stuck in one of Wembley’s super efficient queues at half time, and as I walked back into the arena from the innards of the ground, I could see play had restarted, which left me a little surprised. I know football isn’t the theatre, or opera, but I expected there’d have been some warning to fans not back in their seats that play had resumed. I was only a couple of minutes late though, and well in time to see Alexis’s screamer down the other end. What a goal that was. We couldn’t quite believe what had happened from where we were sitting, so god knows what the Villa players and fans made of it. I imagine Timmy’s team talk at half time had been about keeping it tight and not being out of it at only one-nil, but that goal really knocked the stuffing out of them and I don’t think anyone in the ground thought there was any way back for them at that point.

After that the mood where I was sat was largely relaxed – much more enjoyable than last year when I briefly considered going straight to the airport after ten minutes! Who knew that thrashing teams in finals was much better than winning in extra time having been 2-0 down?

We had a great view through a gap of players for Per’s goal, which at the time I thought was clean, despite him actually nodding it onto his own shoulder, and Giroud’s was the icing on the already considerably delicious cake. The players’ photos with the trophy for the press were just down in front of where we were sitting, which was fantastic, and I must at this point add my enormous thanks to Nick for so generously helping me out with the ticket, and to Tone for facilitating. Gents both.

After the game more drinks were had, and eventually, with an early flight the next day (delayed by two hours as it transpired; Ryanair’s only redemption being their livery which matched my blue and yellow scarf perfectly), I took my leave and tumbled home to my friend’s house where we watched the match again, before I finally fell asleep, absolutely exhausted.

As I say, an absolutely amazing day, spent with great people, and many thanks to all those involved in making it happen. Does two years running count as a tradition? The hat trick next year would make it indisputable, but whatever happens in the future, I’ll not forget the experience of the last two years at Wembley as long as I live.

That’s your lot. I’m off to write an angry letter to someone about this weather – and put the heating on. Have yourselves a quiet/restful/dry Sunday, and I’ll be back tomorrow morning, probably with even less actual news to report than today.