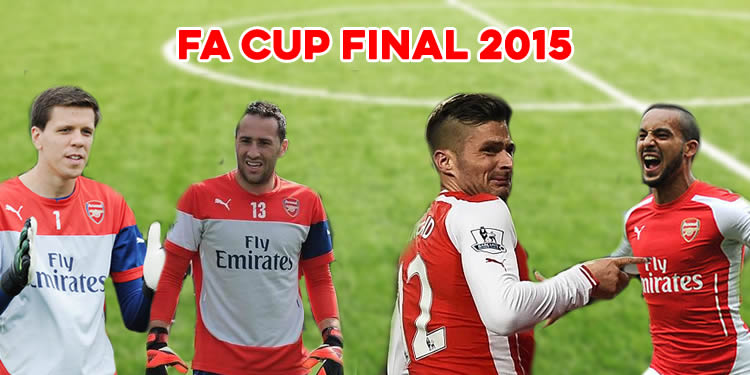 Arsene Wenger selected an unaltered starting line-up for six consecutive matches in April and May, an unprecedented occurrence during his reign. However, as Saturday’s Cup Final approaches, he has several selection dilemmas which will have him clawing at his scalp in consideration. Theo Walcott and Jack Wilshere certainly gave him food for thought with a pair of very convincing performances against West Brom.

Jack and Theo brought a freshness to the Arsenal line-up where stasis had begun to appear. There again, it is difficult to weigh up just how much they were assisted by West Brom’s strawberry daquiries and flip flops act. The great Arsenal goalkeeper debate of 2015 has rumbled since time immemorial, whilst one probably has to accept that Mathieu Debuchy and Mikel Arteta will not be fit enough to take part.

Alex Oxlade-Chamberlain’s 15 minute cameo against the Baggies was probably an audition to prove himself fit enough for the ‘break glass in case of emergency’ role from the substitutes bench. He surely cannot be fit enough to start and working out some of his obvious rustiness in the risk free environment of the West Brom match will have done him no harm. With Danny Welbeck unavailable due to injury, The Ox’s presence on the bench is doubly necessary.

If we accept that Alexis and Özil are certain starters, then effectively we are looking at a scenario whereby two of Walcott, Giroud, Cazorla, Ramsey and Wilshere are likely to miss out. Fitness permitting, the certain picks look to be Bellerin, Mertescielny, Coquelin, Özil and Alexis with Cazorla very, very likely to start you feel. In every other position, the manager has a choice to make. I took an in depth look at each of the manager’s skull scratchers for his Wembley starting XI.

This really is flip a coin territory. Szczesny has been Arsene’s cup keeper since he was dropped in January and having missed out on last year’s final despite being first choice, the Pole would feel justifiably hard done by to be overlooked for this one. However, if the manager intends to start Szczesny, it begs the question as to why he wasn’t given the West Brom match to blow away some cobwebs. Against Reading in the semi-final, I thought Szczesny did not quite look like himself.

Wenger has not always been as loyal to the ‘cup keeper’ as many would have you believe. In 2002, Richard Wright played in every round only to see David Seaman restored for the final. The same was true in 2005, when Jens Lehmann started the final against Manchester United in Cardiff. Ospina would be the logical choice now as he ought to have the rhythm and there just wouldn’t have been any good reason to not give Szczesny a run out against West Brom were he in the manager’s Wembley plans.

There again, Ospina hardly convinced on Sunday. He was at fault for West Brom’s goal and very nearly spilled another into his net later on in the game. There was a pungent whiff of sentiment when Wenger gave Fabianski the gloves last May, but it doesn’t look as though his relationship with Szczesny is quite as cordial. I think it would be quite dangerous to throw Szczesny in cold, but I don’t think the selection of either goalie would hugely surprise me come Saturday.

IS THERE A PLACE FOR THEO WALCOTT?

I always tend to bat away the “what should be in the first choice XI?” question because football changes so quickly. A fortnight ago, the idea that Theo Walcott would be in the reckoning for a cup final start would have been regarded as fanciful. But he produced an eye catching cameo against Sunderland and bagged a hat trick from the centre forward position against West Brom. Olivier Giroud, meanwhile, is 541 minutes without an Arsenal goal. It’s a humdinger alright.

The issue with playing Walcott upfront is that it will either work emphatically, as it did against West Brom, or it will fail miserably. There’s little prospect of a solid, 7/10 display. If Theo starts upfront, he’s just as likely to run Villa ragged and score a brace as he is to be subbed after 60 anonymous minutes. You can either deal with Theo looking to run in behind you, or you categorically cannot. The crux is that Giroud arguably gives you a similar problem. If you’re a defender, you pretty much know what you’re going to get from either. If you’re facing Walcott, sit deep and don’t allow him space in behind.

If it’s Giroud, crowd him the instant he receives possession, stop him laying the ball off to teammates safe in the assumption that he’s not going to spin and run in behind into the space you have vacated. Walcott and Giroud are unplayable when it’s their day and very frustrating when it’s not. Wenger will effectively have to second guess which dog is more likely to have his day. The advantage for Arsenal is that Tim Sherwood has as much idea as we do about who will start upfront. Both players offer specific, yet diametrically opposed threats. It’s going to be difficult for him to prepare for both eventualities simultaneously.

Of course, Walcott could play on the right, but that would probably entail leaving both of Ramsey and Wilshere out. The midfield trio of Coquelin, Cazorla and Özil seems rather established. Unlike Walcott, neither Ramsey nor Wilshere are natural on the right and playing either one in that position is a matter of accommodation. It’s similar to the Giroud or Walcott conundrum in a sense, in that both players bring something very different to the position.

Distilled simply, Ramsey provides a threat off the ball, whilst Wilshere carries the fight with it. Ramsey is more akin to Freddie Ljungberg, constantly looking to make late runs into the box and receive the ball in threatening areas in the final third. Wilshere meanwhile, plays slightly more like a winger, only with a strong proclivity to cut inside. He will take players on and look for angles to play passes between full backs and centre halves. I think this decision will be linked with the selection of the centre forward.

If Wenger opts for Giroud, Ramsey is a better bet from the right hand side. The Welshman is more direct and will look to play off of the Frenchman, whist Giroud provides the kind of focal point that allows Ramsey to run behind defences undetected. If Theo gets the nod, Wilshere would be the logical selection because he is more of a provider. He likes to find angles to pop the ball in behind, especially into the corridor of space between the centre halves and the full-backs, where Walcott loves to lurk.

Ramsey is a scorer and Wilshere is a provider, broadly speaking, so they will work better with a specific type of ‘enabling’ centre forward.

Nacho has rightly earned great plaudits for his improved performances at left-back this season and looks the de facto first choice. However, it is slightly curious that Kieran Gibbs played the final two games of the league campaign. In Monreal’s last two appearances against Manchester United and Swansea City, the Gunners conceded goals to crosses flighted towards his post. Whilst Gibbs’ physical stature and aerial prowess hardly seem corrective in this respect, Villa will certainly have identified this potential weakness in Monreal’s game.

There is also an argument that Alexis is a more potent attacking force with Kieran Gibbs behind him. Gibbs has more of a tendency to provide an overlap, which serves Alexis’ predilection for cutting inside. Kieran performed pretty poorly in the semi-final against Reading, but the Chilean did manage to score two goals by moving in from the left hand touchline which I don’t think to be an enormous coincidence. Alexis scored in a very similar fashion at QPR in March, cutting in from the left with Gibbs careering up alongside him to provide a decoy.

Alexis’ only other goals since February came at Hull earlier this month and one of those was a free-kick. Monreal has been in good form and it would be very harsh indeed for him to miss out. But if the manager thinks that Kieran Gibbs is more likely to bring the best out of Alexis, then it may be a call he is willing to make for the greater good. Often Alexis takes on his right back and looks a little isolated. Gibbs could go some way to amending that, though that would be something of a defensive risk, because Monreal would be a more assured presence against Agbonlahor on Villa’s right in my opinion.