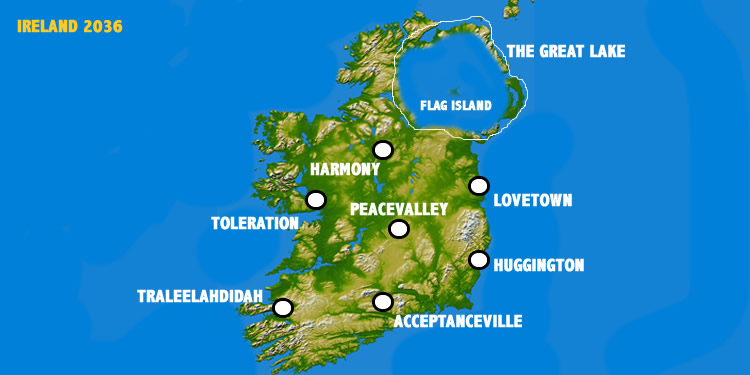 The year is 2036. Many changes have occurred in the world. British Prime Minister Jon Terry of UKIP, IKIP, WEALLKIP, has just been sworn in after his ‘If it ain’t white, it’s shite’ campaign caught fire. Literally, as all his opponents ended up a charred mess.

“It’s a great day for us to go back to what made this nation great”, he declares as he munches on Britain’s favourite indigenous snack, the salt and vinegar poppadom. Via his NetEye©®, he receives an instant message of congratulations from Bullwinkle J Bush, president of the United States of Amexico and Canadia, no longer the land of the free and home of the brave but a place where families with less than 18 children and a 100% attendance rate at church on Sunday are known as Obamanarians and routinely persecuted and forced to live underground.

Literally, they dwell beneath the cities in fear as those above continue their war with Australia where 800 years worth of oil was discovered beneath Ayers Rock – now re-branded as ShellCorp Oil Mountain. Their First Mate, Kevin Muscat, refuses to accept that his policy of shattering citizens legs just because he doesn’t like the colour of their shirt is undemocratic and accuses Bush of profiteering as its revealed a company in which he’s a director is involved in the war effort.

The assassination of HyperAsia’s ruler, that fella from The Raid movies, sent the region into turmoil and the famously football mad population refused to pay for tickets for a Sp*rs summer tour game against Christmas Island FC – holders of the both the World Cup and winners of the Eurovision song contest.

Meanwhile, in Ireland the newly elected Guardian of Equality, is Taylor Swift, whose ancestry was linked back to the creation of the Book of Kells.

As the rest of the world implodes, Ireland is the place everyone wants to be as there’s a free, functioning healthcare system, women have control over their own bodies without the deeply entrenched patriarchal hangover of times past, there’s an understanding of addiction and mental illness, and childhood obesity became a thing of the past in 2024.

People are free to marry who they like, the river Liffey is so clean it can used as drinking water, and even though there’s the occasional nasty incident involving the brainwashed minions of the spiteful Ahern/Haughey clans, they’re crucified … with kindness until they break down and promise never to be so mean again.

In football, Arsene Wenger has just signed a new contract with Arsenal with people calling him the ‘sprightliest 86 year old ever to manage in the Watery Beer That Recent Legislation Doesn’t Let Us Advertise But You All Know Which One We Mean Yeah The One With The Cool Horses In The Ad What A Shame Horses Are Extinct Now Premier League’. It is referred to as the BPL for short.

Sadly, the Gunners lost their final, crucial, league game of the season when veteran skipper Hector Bellerin – who returned to London when the city of Barcelona was destroyed by Russian bombers after President Abramovich took umbrage at Cesc Fabregas calling Chelsea fans ‘Thunderous Dickheads’ (but in Catalan) – missed a penalty in the last minute of the final 8th period of the game. Hector was consoled by mates Trevor Arteta and Godfrey Mertesacker, sons of famous ex-Arsenal players, but he felt so bad he refused to do his mandatory commercial endorsement after the game and was handed a subsequent 3 game ban by FIFA (Football Is For Advertising).

The fans, however, don’t mind, because although the team has finished 4th behind champions Crystal Meth Palace, runners-up Grimsby and third place FC United of Manchester, the title is no longer decided by arbitrary notions of sporting achievement like ‘Who has the most points, scored the most goals, and won the most games’.

Instead, the winner is declared by a vote on the world’s largest multi-media Connection Network – Orwell. With each baby born automatically implanted with the required chip at birth almost 20 billion of the earth’s 24 billion population are connected at any moment, but for some reason there appear to be more mobilised Arsenal fans than any other team. They crack into action, thinking momentarily about the result which registers a vote in the Mind Cloud which is then transmitted to the HQ of the Watery Beer That Recent Legislation Doesn’t Let Us Advertise But You All Know Which One We Mean Yeah The One With The Cool Horses In The Ad What A Shame Horses Are Extinct Now Premier League.

Within minutes of the final whistle Arsenal are declared Champions for the 18th consecutive year. “I told you to judge us in May”, winks Wenger at his post-game press conference. He is accompanied as always by his faithful servant who he brings in on a lead and who gnaws a nasty looking bone, growling occasionally but nobody pays him any mind.

“My name is Reek”, he says in a Portuguese accent. “You’re goddam right it is”, says Wenger as he then parades the trophy around the Apple Stadium, renamed in 2029 as the world’s richest anything took over from Emirates whose decision to make their female flight attendants to wear suits of armour sparked outrage in Ireland who declared them an enemy and now everyone flies Ryanair who can fit hundreds more people on their standing flights.

It’s another triumph for the club, the trophy cabinet is overflowing, and on BBSKYC 4, Gary Lineker shakes his head sadly at the predictability of it all. “Shat on the Watery Beer That Recent Legislation Doesn’t Let Us Advertise But You All Know Which One We Mean Yeah The One With The Cool Horses In The Ad What A Shame Horses Are Extinct Now Premier League again”, he Tweets.

Meanwhile, some shit’s going down with FIFA. Blimey. Let’s see where that takes us.

Lookout for more FA Cup build-up throughout the day here, more from me tomorrow. Until then.