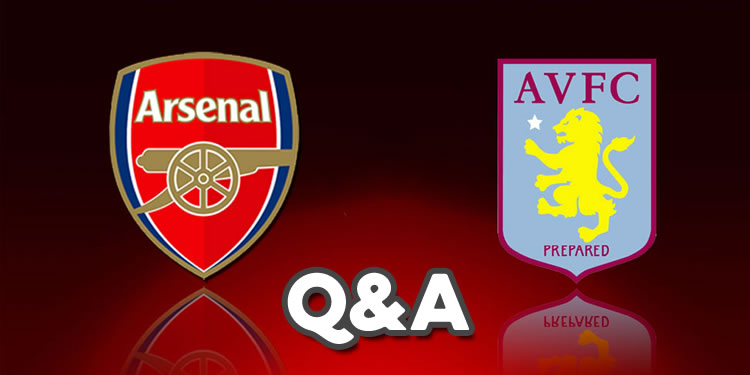 Dubbed ‘Tactics Tim’ by the press, there is a fair amount of debate around the managerial talents of Tim Sherwood. It strikes me that his ‘give it a right good go’ tactical template is a very death or glory tenet. However, after some of the most turgid football in Premier League memory under Alex McLeish and Paul Lambert, Sherwood’s up and at ‘em approach has at least energised a club that seemed to be stuck in an almighty rut.

Villa have some threatening attacking players who will cause Arsene Wenger and Arsenal fans some sleepless nights ahead of Saturday. But how are Villa fans feeling ahead of Saturday’s final? Has Sherwood engendered optimism for a fanbase that hasn’t had much to get excited about over the last five years or so? I spoke with Mike Field from Vital Aston Villa www.astonvilla.vitalfootball.co.uk to get the lowdown.

Villa will go into the game as underdogs, but what is the feeling amongst Villa fans about this game? Confident? Nervous? Or just give it a shot and see what happens?

Definitely underdogs when you consider the relative form of both sides, especially as you come into the game on the back of a good win against West Brom, and we had the heavy defeat to Southampton and then the Burnley loss. But I think the general feeling would be a nervous hope. We know what we’ve done in the cup games this season and in the path to the final we’ve ground out a few results with very unflattering performances, but performances in general have lifted – although recent results wouldn’t show that – so for us it comes down to do we turn up on the day in many ways. If we turn up we carry a threat, we can be solid at the back and more than capable of taking the game. If we don’t turn up – well let’s hope we turn up.

After some fairly dreary football under the likes of McLeish and Lambert, is it fair to say that Sherwood has brought some excitement back into supporting Villa?

There’s a notable lift and buzz around the club again now, the PR is right, and positive, and Sherwood has been saying all the right things. But with our more recent run of form stunted by the last two results, there has been a sense of being brought back down to Earth. Even then largely whilst results haven’t been there, the performances are still showing improvement as are the performances of individuals, so there’s still a sense of hope – but not a papering over the cracks of what’s wrong at the club. The last few months have certainly been more enjoyable than the last few years though – although many would argue a dancing Flamingo or even Justin Bieber would’ve been more entertaining the last few years.

What is the single biggest tactical switch he has made? Villa really struggled for goals prior to his arrival and that no longer seems to be the case.

Honestly, I think it’s just attitude. Sherwood’s arrival coincided with a fitter Christian Benteke, and that element alone shouldn’t be ignored, even in the eyes of Lambert’s biggest doubters. Allied to that it’s attitude, confidence and positivity. The days of bumbling, mumbling, dourness with a severe overuse of cliches and describing us as ‘excellent’ after every loss are over. Tactically we are just a bit more direct again, we counter attack at pace, rather than tippy tappy ‘we’ve discovered football’ passing between defenders that seemed to bore the players senseless. We are going forward with a bit more speed and a lot more belief again now, but I wouldn’t say the change is overly tactical, it’s just been about telling the players the truth, pointing out they have an obligation to do far more than they have done BUT giving them the belief they can make a difference. Sherwood has lifted spirits in the process.

Benteke aside, who do you see as a potential match winner for Villa?

Again it boils down to who turns up. Jack Grealish is capable of a moment of brilliance, but he’s still learning his trade and finding his feet and doesn’t yet have that uber confidence in front of goal. Everyone knows what Gabby Agbonlahor is capable of when it’s his day. Then we have Scott Sinclair, Tom Cleverley and Fabian Delph all capable of winning matches if things fall for them. We aren’t strictly a one man team in Benteke, but so much goes through him in the build-up that a slower day from him does cost us because others don’t step up to the plate often enough, and having listed those players I could list plenty more who fall into the same category as well. With it being a final, and given the season he’s had, I have to pick one player as a potential match winner I’d have to go with Delphy.

Which Arsenal player do you most fear?

Sanchez seems to have had a very good season, and at least judging from the odd game on TV Ramsey seems more back to himself as well. Giroud seems to either be on fire or miss, but you’ve also got Walcott flying back into form judging by the last game. I don’t think I can pick just one, as too many are capable of changing games.

Where do you see Arsenal’s weaknesses? Which do you think Sherwood should be identifying in this Arsenal team as a potential soft spot?

It’s probably cliched for Arsenal really, but the pace in the centre of defence I would think is the obvious one. You seem to have good pace at full back, but if Mertesacker and Koscielny (not seen a lot of Gabriel to be fair) get caught high up the pitch battling with Benteke, then we have plenty with the legs to really drive through the middle of the pitch and take advantage of the spaces they will leave. I can’t say I’ve seen an awful lot of Arsenal, but I did see the game against Manchester City and defensively it was probably the best I’ve seen you play since the days of Tony Adams et al, so I’m hoping you play more of a high line and hope for offsides, and we just manage to get our timing right as that is a clear strength of ours – especially with Sherwood liking two Number 10s to try and exploit those spaces.

And what do you think Villa’s biggest weakness at the moment, what scares you going into this game?

Consistency, or the severe lack thereof. If Benteke doesn’t find the net, the team struggles to unless it’s going to be another of those days from Cleverley or Delph. Defensively we are heavily prone to falling to sleep and undoing all of our previous efforts. Even during our upturn in performance levels, there has remained a hint of squeaky bum for a lot of us.

If you had the power to choose a Villa player to score the winning goal, who would you choose and why?

Torn on this one, I think it would do wonders for Grealish to open his account, especially in a game of this importance to really kick start him in front of goal, but I think I’d have to go for Delph. With many expecting him to walk this summer, he showed something we don’t see a lot of in football now – loyalty – and he signed the new deal. He spoke of wanting to repay the fact we stuck by him through his injury hell. Given he will be skippering us on the day I think it would be fitting for him to score the goal and lifts the trophy.

What do you think Villa’s aspirations should be next year? It strikes me that you shouldn’t really be involved in the relegation battle given squad and resources at your disposal.

I don’t know if the last few years have just ripped optimism from me, but whilst I’d agree we shouldn’t be battling relegation as we have the last few years, I’d be delighted with a steady mid-table finish. I don’t think we are that close in terms of squad depth for a European run anymore. Even our best XI struggle with dopey moments, a lack of sharing goals around and consistency – but we should’ve done more than we have. How much Tim can change the belief and attitude on the training ground can’t really be known, but I think few would argue had Sherwood had the whole season, we would at least be around that midtable mark based on what we’ve seen. I’d happily take that for 2015-16 and just see some tangible growth and improvement again, giving us some consistency that we could grow from.

There’s quite a debate about who will play in goal for Arsenal on Saturday. Who is going to be guarding nets for Villa? Given or Guzan?

Given actually picked up a groin injury and is touch and go for the final. So I’ll answer assuming both are going to be fit! I would’ve said Guzan a few days back. He clearly needed a break and to be taken out of the limelight as the season caught up with him, and he was heavily punished against Manchester City, so seeing Given come in wasn’t a surprise. For the Burnley game Sherwood went with our youngster Jed Steer and whilst I see the one argument of taking a look at him ahead of next year, it also implied to me that the manager isn’t overly sold on Guzan or Given. I honestly don’t know if he’ll go with Guzan thinking of him as our number 1 next year, or Given, thinking he’s the safer pair of hands for one more season/or a swansong having decided he won’t remain with us. I don’t know what the split is for Arsenal fans with Ospina or that Chesney bloke, but the Guzan/Given debate would probably be equally split on our side.

Aston Villa’s last trophy came 19 years ago, when they won the League Cup in 1996. They beat Leeds United 3-0 in the final at Wembley that year. They were last in the F.A. Cup Final in 2000, losing 1-0 to Chelsea in the last final played at the old Wembley.

Aston Villa are one of the seven English sides to have won the domestic ‘double’ of League title and F.A. Cup in the same season, having won it in 1896-97.

Villa’s Archie Hunter became the first player to score in every round of the FA Cup in Villa’s victorious 1887 campaign.