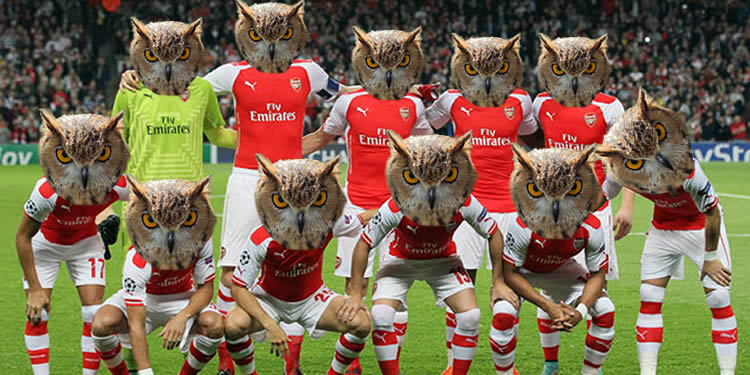 I had the oddest dream this morning that my office was in the house next door and I had to do some really early morning work. I woke up one of the girls who lives there and she said, quite grumpily, ‘Well, I suppose I’d better go and do the make-up for the team’.

I knew this to mean that she was going to do the Arsenal team’s make-up before the FA Cup final photo shoot, so she picked up a large tin of white emulsion, a battered old paintbrush and stormed out the door. Then I discovered I was carrying a bag full of baby owls, so I left them there and went back home because owls freak me out. Odd.

Thankfully my actual office is an owl free zone, so we can get on with this morning’s blog, and we’ll start with some unfortunate news ahead of the final on Saturday, and that’s that Danny Welbeck has been ruled out of the game by Arsene Wenger. Speaking yesterday, he said:

Welbeck will be short because he has not practiced yet.

Of course we know things can surprise you from time to time and he might recover, but that’s a bit of a shame, especially as he played such a big part in the win at Old Trafford and provides a very decent alternative to Olivier Giroud in the centre-forward position. It’s offset by the performance of Theo Walcott against West Brom and I think – even if you have to take that game in its end of season, West Brom not giving a fish’s tit, context – he’s got to be pushing for a start on Saturday.

I guess that’s going to be one of the talking points of the week. Will it be Giroud or Walcott up front? That, along with Szczesny or Ospina in goal, will have everyone guessing because, for the most part, the rest of the team picks itself. Players like Mathieu Debuchy, Mikel Arteta and Alex Oxlade-Chamberlain have spent so long out that even if they were declared fit you couldn’t risk them in a final as their first game back.

At this point I think it’s going to be: GK, Bellerin, Mertesacker, Koscielny, Monreal, Coquelin, Cazorla, Ramsey, Ozil, Alexis, FW. I don’t expect any hints from the manager at all so unless something happens that makes it obvious we’re going to be speculating right up until kick off.

At this moment in time, if it were up to me, I’m leaning towards an Ospina – Walcott combo. I prefer Szczesny as a player, but my concern is that he hasn’t played in 5/6 weeks and I think if the manager was going to play him at Wembley he should have played him against West Brom. I’d be worried he’d come into the game slightly too ‘cold’ as it were. But then I remember I much prefer him to Ospina and I second-guess myself.

The same goes with Walcott. The quality of his first half performance was unquestionable, but we know he’s capable of that from time to time, not always consistently. Still, it was a cracking hat-trick and he’s got that going into the final whereas Giroud hasn’t scored in 8 games and looks a bit leggy at the moment.

But is scoring in one game ‘form’? I don’t think it is. Isn’t Giroud bound to find his shooting boots sooner rather than later and might not his defensive contribution be important – especially if you’re playing a small goalkeeper who has just had a game where that part of his game was exposed? Decisions decisions, eh?

Anyway, as I said this will go on throughout the week but we’ll try not to revisit it until much closer to the game, if possible. And for a little more on the goalkeeping issue in particular, there’s some good stuff in the latest By the numbers column from @7amkickoff.

Meanwhile, some strong words from Arsene Wenger who is concerned that the early start to next season and the late finish to this one won’t give players anywhere near enough time to get some rest. He says:

The players have played the World Cup, then you have no winter break, and when you reach the FA Cup final, you play on May 30, then the European players who are called up by their international teams play until June 14, then you start on August 8.

If you count six weeks’ preparation, where is the time for recovery? As a manager, you usually have a bit of time to relax after the season when there is no international competition, but this year we finish at the end of May and start again at the end of June.

He also had a little pop at FIFA too (why not?!) about the scheduling of the Copa America which could see Alexis play into July, which is obviously a bit of a concern simply because there has to come a point where even his boundless energy is depleted.

It is disappointing that they speak a lot about the health of the players, but when you look at the competition that is organised, this Copa America, and look at the date of the start of the Premier League, it is not reasonable.

Little by little common sense is being removed from the game as commercial interests dictate what happens. From ticket prices to last-minute fixture changes, Friday night football, pointless summer international ‘friendlies’, World Cups that can be bought by the highest bidder and nobody can – or is willing to – do anything about it, money spinning pre-season tours, kit launches, overly-inflated summer tournaments (some of which aren’t even worth bothering with), and everything else you can think of.

I get the manager’s concern, the break this summer might be just over four weeks before pre-season training begins and for some players even less than that, but they’re all in on it. The Premier League, UEFA, FIFA, the clubs, their sponsors and commercial partners who are trying to squeeze every last drop out of every possible area, and ultimately it will come at the expense of the game and the players.

There IS such a thing as too much football. I mean, we all love the game, but it is possible for us to live without it for more than a few weeks each summer. If anything going without restores your enthusiasm a bit, but in the end when there’s no football they’re not making money and that’s what drives all these decisions. It’s a bit sad really, but that’s the world we’ve allowed to be created and there’s no going back on it now.

Right, keep an eye on Arseblog News throughout the day for updates, videos and more as we build up to Wembley. We’ll have an article a day from Tim Stillman here as part of that too – his first looks at classic encounters between Arsenal and Villa.

And if you haven’t yet had a chance to listen to yesterday’s Arsecast Extra, I’d say it’s easily in the top 50 episodes we’ve ever done so check it out here. There’s also some info about an event we’re doing in The Tollington on Friday night, so tune in for that (and I’ll give you more info on site during the week).

ps – It’s St Michael’s Day, relive it again because why the hell wouldn’t you?