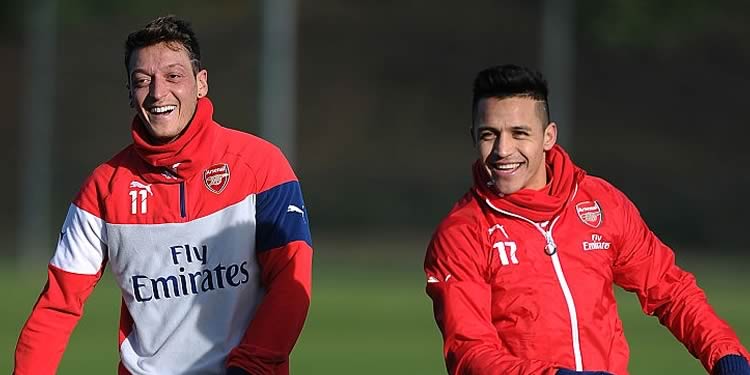 It’s going to be one of those weeks, I think. A game on Sunday has been prefaced by another win, one without much in the way of talking points, and that’s likely to be reflected in how quiet it is from a news point of view.

Still, there’s always something to keep us going. I’d start this morning with a look at yesterday’s Tactics Column from Anam where he touches on the growing relationship between Mesut Ozil and Alexis Sanchez. Via our old pal Orbinho came this stat from Saturday:

Mesut Özil created 9 chances on Saturday, which is the most in an FA Cup game this season, beating his own season high of 8 v Middlesbrough.

Which is kind of remarkable because I think frustration with our inability to break down Reading led to the perception that we hadn’t created much. I touched on his set piece delivery in my post-game thoughts and that fashioned two opportunities for Gabriel, one of which drew a great save, the other can only be put down as a terrible miss.

He set up the one from which Giroud hit the post and, of course, set up the opening goal for Alexis with the kind of pass that you pay £42m for. The vision and execution were both of the highest order:

Make no mistake, this is the creative future of this team. It’s taken them some time to build an understanding because of Ozil’s World Cup hangover and the injury he suffered subsequently – but now they’re beginning to start regularly together, we can see that their wavelengths are converging. The automatisms that Per Mertesacker spoke about are in full effect.

And while we still have football to play between now and May 30th, I think the manager will already be thinking about the best way to use his two most expensive signings next season. Let’s be honest, our midfield set-up right now is somewhat unconventional. We have a dynamic central midfielder, Aaron Ramsey, out on the right hand side, while a typically creative player, almost a number 10, in Santi Cazorla is sitting deep, closer to Francis Coquelin.

It’s definitely been effective at times but Cazorla, Ozil and Alexis feels like a three into two situation that isn’t really a long-term thing. Cazorla has been outstanding this season and he’s a player I love a lot. I mean, how can you not? He’s so much fun to watch, his ability with both feet is outstanding, and his capacity to slot into a deeper-lying midfield position without being physically dominated is a testament to his talent.

However, talk about a summer return to Spain doesn’t seem to be going away. It genuinely wouldn’t be a surprise to me if he went back there this summer. He turns 31 in December and if he wants a move back home at some stage he’ll want to do it at a time when he can find a club that still can fulfill some of his competitive ambitions.

That would, of course, leave space in the midfield for us to fill. Will it be with a purchase or one of Arsene’s famous internal solutions. My feeling is that he’ll look at Ramsey, Jack Wilshere and Alex Oxlade-Chamberlain as prospects for that position. Indeed, Ramsey has already played there a lot in his Arsenal career and to my mind that’s his best position. When he’s closer to the DM his engine and work-rate makes him very effective in there.

For Wilshere too that’s the most obvious place for him in the team. Even if there are doubts about him because of his injury record, I don’t think the manager is anywhere near to closing the door on him and he’ll look for him to step up next season. And as for Oxlade-Chamberlain, he’s not as gifted technically as Cazorla but he ticks some of the same boxes in terms of his ability to dribble and drive through the lines.

He’s got qualities of the Spaniard, but also someone like Tomas Rosicky too (and he might be another one to depart this summer if we’re being realistic). The fact that Wilshere and the Ox might also be considered as candidates for a more creative role further on adds some depth in the manager’s mind, but the two England men still have plenty to prove – not least of which is their fitness.

Anyway, whatever happens behind them, it’s easy to look at Alexis and Ozil as the creative hub of the team as time goes by. As Anam said of Alexis:

Here however, there was individualism, but perhaps for the first time, encased in an obvious team structure. That can be highlighted by his first goal, where he made the type of run that he so often did at Barcelona, but hasn’t as often in an Arsenal shirt.

Lots of players make lots of runs, it’s having somebody with the ability to pick them out that’s important.  But even on a very basic level there are things happening between the two that speak to the way this team is going to play in the future. When Szczesny punched away a corner and Ozil, deep in midfield, picked up the loose ball in the 84th minute, he fed Alexis who burst down the left hand side.

He was followed swiftly by the German who sprinted to keep up and provide an outlet outside him. Alexis went inside, swept the ball to Giroud who fed Ramsey who should have scored, instead he ended up smashing the ball against the post after his first shot was saved. Ozil’s run down the left ensured play remained stretched and not as narrow as Reading had tried to make it all day. Little things, but important ones.

It’s exciting to think of Ozil and Alexis as complementary figures in this Arsenal team. The incisive nature of the Chilean, who always wants to make something happen with his energy as much as the ball, tallied with the German who can make it happen with a flick of that left foot and the rare ability to spot things that others just don’t.

Remember, if you haven’t had a chance to listen to this week’s Arsecast Extra you can catch up right here as James and I discuss the FA Cup semi, our final opponents, goalkeeping issues and loads more.