Arsenal stuttered and spluttered their way to the FA Cup final thanks to two goals from Alexis Sanchez in a 2-1 victory. The Chilean wasn’t Arsenal’s best player, but he was one of the few able to find space against a resolute Reading side.

At times, in his Arsenal career so far, Alexis has felt like a player operating independently from the system, often seen hounding opponents alone, or attempting to slalom past two or three players. Here however, there was individualism, but perhaps for the first time, encased in an obvious team structure. That can be highlighted by his first goal, where he made the type of run that he so often did at Barcelona, but hasn’t as often in an Arsenal shirt. You can say the same thing of the passer, Mesut Ozil, who picked out Alexis with the type of defence splitting pass we expected of him when he signed from Real Madrid.

It was the type of combination that Reading made difficult for Arsenal to find all afternoon, defending compactly but curiously also, inviting Arsenal to play that pass behind which so often was over-hit. Here however, it was perfect, as Ozil picked up the ball from a central position and delivered it just where Alexis wanted it. Much less can be said of the winning goal although the two combined again, but it was the bloody-mindedness of Alexis to get to goal which secured the breakthrough, cutting inside and powering a shot which, to put it very kindly, was too hot for Adam Frederici to handle.

Over the past few weeks, the partnership between Ozil and Alexis has become more obvious and the pair entered the pitch for the second-half deep in conversation. Of course, its pure speculation what might have been said – and you’d need to decipher the language that would have been spoken first – but surely work has been done on the training ground for the two to find each other more frequently. Indeed, Tomas Rosicky has revealed recently that team has worked on specific tactical adjustments of late, and it looks like that first goal is the result of the extra work – or it could be that the two best players merely pooled together to be more effective.

Still, Alexis has evidently become more disciplined recently, less the player we witnessed earlier in the season who roamed across the pitch with abandon. He is playing a different role, closer to a winger than a striker (while Aaron Ramsey floats on the other side) and as such, Arsenal’s positional play has improved recently. As Martin Perarnau, author of Pep Confidential, explains in this interview with Adin Osmanbasic, positional play is more nuanced, specific to individual teams, but broadly it is a way for teams to find the spare man behind each line of pressure.

Arsenal traditionally do this by granting certain players freedom to move into spaces to create 2v1s and 3v2s. But after the 3-1 Monaco defeat, that liberty of movement has had to be readdressed somewhat and now it seems Ozil holds the key. There’s still freedom, but whereas once players would move at the beginning of moves, it seems now two or three passes must be made to shuffle opponents out of position before the signal is given for players to drift from their positions, and Ozil is the best at that.

It’s still not perfect, however, as The Gunners really seem to struggle with the ball in their own half. That’s because the Wenger Way is to delegate responsibility to play the ball out of the back to the defenders, not the midfielders, and as such, Francis Coquelin is a non-factor in the build-up. As Johan Cruyff used to say, “if you bring the ball out well initially, then you’ll play well. If you don’t do that then there’s no chance of playing well.”

Arsenal’s struggles seem to stem from not building the play out effectively, allowing Reading to regroup after the press instead of finding the spare man between the lines. Often the centre-backs would play it side to side between each other waiting for a gap that wouldn’t open (though Laurent Koscielny tried to force the issue with a couple of diagonal passes, at one point in the first-half, playing a glorious through-the-lines pass to Alexis on the touchline).

The responsibility then would fall to Santi Cazorla to bring Arsenal up the pitch with his tight dribbling (which also is role you’d envisage Jack Wilshere to excel at). The Spaniard was excellent initially but faded later on. Ozil tried to drop in to collect possession but it’s not really the position Wenger wanted him because Reading could get men behind the ball. Still, that didn’t stop Ozil unlocking the defence when he picked up the ball just outside the box close to the end of the first-half, and dinked a wonderful pass to Alexis. Clear-cut chances were few and far between after that as Arsenal stuttered to threatened, and Reading became more dangerous on the counter-attack. 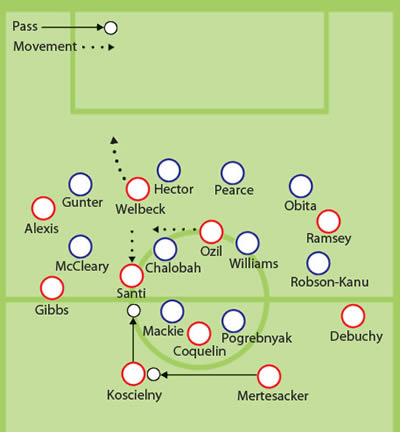 In extra-time, Francis Coquelin was withdrawn for Theo Walcott as his impact was stifled by a similarly battling Reading. On the ball, he left a lot to be desired which is why it makes you hesitant to label him “The Answer” because he just doesn’t offer himself in possession. Some say that it’s not his job but it becomes it in the build-up phase, otherwise, as Cruyff also says, he becomes a “block”, stopping the team moving the ball about effectively.

The other player to under-perform was Danny Welbeck. He just doesn’t do enough upfront. It’s a stark contrast to his performances out wide where he seems to know just where to be at the right, sometimes even drifting over to the other flank. In the centre, he mainly looks to make runs in behind which Reading obliged to let him try. They squeezed the middle of the pitch to stop Arsenal passing through so the ball was always on, but he never really asserted himself on the defenders. When Olivier Giroud came on, he showed what was missing, battling the centre-backs and using his arms to give him space to manufacture the ball and open up space.

Indeed, there’s an argument to say that Welbeck hasn’t truly ever learned how to play up front on his own, at Manchester United usually playing in a front two thus some of the work is spared. Indeed, that’s why Giroud has improved so greatly. In the modern game, lone strikers have so much to do – which has even led Roy Hodgson to voice some concern over the demands of the role.

Giroud though, keeps on adding more to his game and has the belief to be effective in all areas. Welbeck tends to operate in a narrow fulcrum. In the end, Arsenal overcame Reading’s stubborn resistance due to the player who has perhaps narrowed his areas of influence to become more efficient: Alexis Sanchez.

Previous articleArsecast Extra Episode 64 – 20.04.2015
Next articleOzil and Alexis a vision of Arsenal’s future