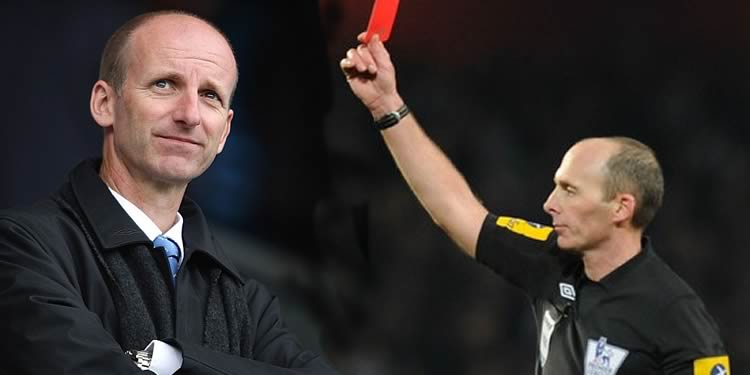 Not a lot going on this morning unfortunately, although I see our old pals the referees are making headlines again.

The prodigious and consistent ineptitude is such that you might almost start to think it’s deliberate. The man in question yesterday, Anthony Taylor. He sent West Brom down to 10 men for this. That’s not even a foul, let alone a second yellow card in an FA Cup quarter-final between two local rivals, but then he does, as we know, have a fondness for issuing red cards to whomever Villa are playing.

There are myriad football reasons why a game can be won or lost, but more and more terrible officiating is becoming one of them. Making referees professional hasn’t worked; trying to protect their authority by refusing to amend incorrect decisions that they’ve seen during games hasn’t worked; and it’s fair to say this new batch is as bad as it’s ever been.

I think everyone accepts it’s a difficult job. The game is faster than ever before, the players more inclined to gain any advantage they can, and the multitude of camera angles benefit us, the viewer, but not the officials who see something once, in real time, and have to make a decision about it instantly.

There are some who would suggest that human error and referees getting things wrong is part and parcel of the game, something we should live with and accept. I do understand that point of view, it’s uncomplicated and it allows one of the game’s biggest cliches – about how decisions even themselves out over the course of a season – to be aired.

Yet that’s no comfort in the moment. It’s not something that provides any solace when you’ve been knocked out of the cup by a bad decision. It doesn’t feel like part of the game when you lose points that can cost you a title, a place in Europe, or see you relegated. There’s nothing simple or uncomplicated about it then.

When fans pay the prices they pay these days to go and watch football, I think we have a right to expect better from the match officials. Certainly better than we’re seeing this season, because almost every week there’s another example of how the man in the middle has got something wrong. And it begs the question – is the standard of refereeing declining, or is the game becoming more difficult to referee?

I suspect it’s combination of the two. I don’t think there’s any doubt this is the worst batch of officials anyone can remember, but at the same time the game is more intense, players are fitter, faster, divier, cheatier and all the rest. So while we can rightly rail at Mike Riley’s coterie of incorrect card-wielding buffoons, isn’t there also the need to offer solutions?

Off the top of my head I can think of three ways:

1 – Two referees per game: If it’s too difficult for the officials to keep up with play as it speeds from one end of the pitch to the other, why not have a referee in each half? 50% less space for them to worry about, means they can concentrate more on what happens, and for things that happen in midfield surely having two pairs of eyes would be of benefit?

If one official doesn’t quite see something from the right angle, maybe his partner does.

2 – Use video evidence more: Frankly I think it’s daft that the only people who don’t have every incident from every angle in slow-motion are the people making the big decisions in the match. I accept there are hurdles to overcome in its implementation, the flow of the game is important, but I’m sure it can be done.

A video referee, like they have in other sports, can make a decision in seconds if required. Not only that, proper use of post-game video evidence, where retrospective punishment can be meted out for players who dive or to punish bad challenges, would make the game easier to officiate in the long-run because players know they can done after the fact even if they get away with it on the day.

3 – A /challenge system: Rugby uses it, but if such a thing existed in football, West Brom could have used one to challenge the second-yellow and, justly, have kept their player on the pitch. Obviously you’d have to limit it to one or two per match, meaning managers would have to learn how best to use them, but would this take up any more time than the complaints and protestations of a disgruntled player who’s just been sent off unfairly?

I mean, I get the referee has to be the man with the ultimate authority in a match, but times change. There’s no shame in referees admitting that they need help to be better, doing so would likely garner them more respect than blindly continuing as they are and being in the news week in, week out for getting things hopelessly wrong.

Whether there’s any desire to make things better though, well, your guess is as good as mine. Back tomorrow with a full preview of the United game.