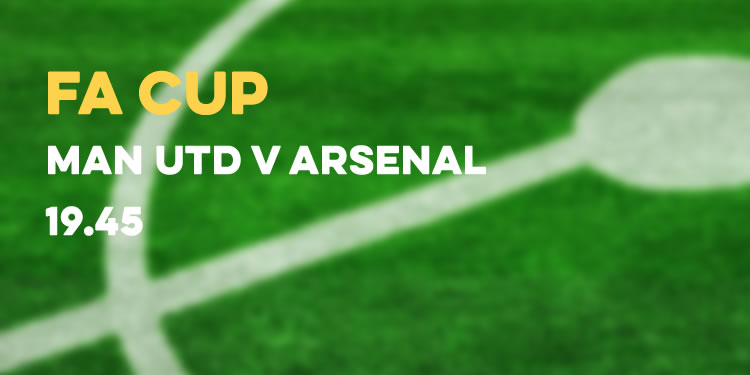 I think it’s safe to say that even in this time of hyperbole, when a Super Sunday can be Burnley v Leicester which, with all due respect to both teams, isn’t that super at all, this is a big, big game tonight.

An FA Cup quarter-final is always a pretty big deal. When it’s between two of England’s biggest clubs, with a history that goes back a long way and hasn’t always been gracious, then it takes on greater importance. And while both sides are involved in a chase for a top four place that, like it or not, probably has more long-term significance than actually winning a trophy, this competition provides the only realistic possibility of tangible success for us and them.

All of which adds up to a cauldron of pressure and expectation on both sides, but I think there’s probably more pressure on Arsene Wenger to get a result tonight than Louis van Gaal. United have had such a trophy surplus in recent years that this season is all about getting back into the top four and into the Champions League. The FA Cup would be a nice addition to that, but it doesn’t feel as if it’s quite as crucial for him as it is for the Arsenal manager.

Having tasted success last season, fans want more. Especially when the opening part of this league season was so disappointing after the previous one and the summer business we did. When you can challenge for the 3/4 of the campaign before falling away, adding star quality like Alexis Sanchez was supposed to kick things on again, but that wasn’t the case. The goodwill generated by the Wembley win last May evaporated very quickly for some and the only prescription is more trophy.

When you look at United this season they’re not particularly fearsome, not like their best sides. Not even like that side Ferguson held together with his last bellows of fear and dominion. There’s some very obvious attacking quality and a great goalkeeper, but in-between they’re nowhere near as strong as they should be. Yet they keep grinding out results they don’t really deserve.

On the one hand you wonder if that can continue, but there’s often a relentless momentum to teams who do that, the winning becomes a habit. They’ve had some draws but have only lost twice in their last 22 games. And when you add our record at Old Trafford into the mix it makes the tonight even more of a challenge.

Since Emmanuel Adebayor’s late goal bagged us a 1-0 win in 2006, our record at their place is: P10, W0, D1, L9. By any standards that’s bad, but there have been some particularly damaging defeats in there too. The 8-2 is obvious, but there was the 4-0 in the FA Cup which was down to a team selection that did us no favours.

Speaking ahead of the game, Arsene Wenger was keen to play down the extra pressure of having to get a result at Old Trafford, saying:

If I have learnt something in my life it is that the performance on the day decides the outcome of the day, not where you play. When the team is not as good, they lose, it doesn’t matter what shirt they wear, or what stadium they play in – it is down to quality.

Which is absolutely spot on – except it’s also been spot on for every time we’ve visited their place since 2006 and not got a thing from the game. I think it does make our job more difficult this season, and it’s almost a psychological barrier we have to overcome.

However, wasn’t that also true at Man City? How long had it been since we won away at one of the big clubs? That day we put in a fantastic performance, won the game, and restored some lost confidence and belief. If the performances against smaller teams since haven’t been anywhere near that good, perhaps there was still some benefit from what we did at City, especially when hanging on a bit trying to see out a one goal lead.

You can’t look at the team we’ll put out tonight and think it short of the talent or quality to win the game. It’s not going to be a starting XI with the equivalents of Hoyte, Bendtner, Traore and Eboue in it. If the defence can keep it together, with Szczesny back in goal obviously out to perform to a level where he puts pressure on Ospina, then we’ve got so much attacking talent with which to cause them problems.

Alexis, Ozil, Cazorla, Giroud, Welbeck, Walcott, Oxlade-Chamberlain – it’s enough to be confident that we can score goals. Quite how he decides to deploy them all remains to be seen. I suspect Ramsey’s return against QPR means he’ll start to add more balance to midfield, so with Coquelin behind him we might see Cazorla ahead, Ozil left, Alexis right and Giroud down the middle. Not bad to start off with.

Our inherent unpredictability makes it difficult to know what we’re going to do and how we’re going to do. Nobody really expected us to do what we did at City, while most people expected us to beat QPR, Palace etc more easily than we did. Add to that the extra something that cup football has and anything could happen this evening.

However it goes, I hope we give a proper account of ourselves. I think the Monaco performance is still something of a looming spectre over this team, but hopefully the wins over Everton and QPR have gone some way to convincing them it was more a bad night at the office than a fundamental flaw in their psyche (which is kinda what I think it is).

We haven’t always produced when the pressure is on, and it’s most definitely on right now. We’re long overdue a win against this lot and at their place, tonight would be a fine time to deliver.

For those of you expecting an Arsecast Extra this morning, it made no sense to do it ahead of the game, so we’ll be recording tomorrow. In the meantime, Friday’s Arsecast contains previews of this game from an Arsenal and Man Utd point of view, so if you haven’t already, it might keep you going.

If you can’t see the game because you’re stuck in work etc, we’ll have full live blog coverage of it for you. Simply check back here later for a post with all the details or bookmark our default live blog page and updates will begin automatically.

Finally, if you haven’t seen the video of it, there’s a transcript of Arsene Wenger’s interview with Martin Keown here (video link included too).

Right, it’s going to be a long drag of a day until kick-off at 7.45 this evening. Catch you later.