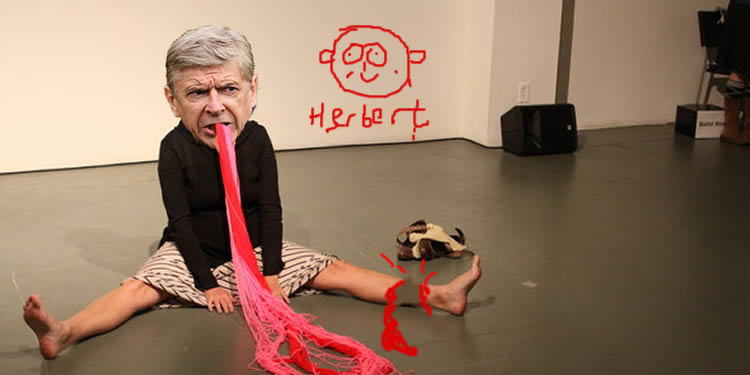 I wonder if one day there’ll be some kind of University course about Arsenal’s transfer dealings. Some days I get the feeling I’m missing something so obvious that it would make sense of it all. Maybe only in the future will we see method behind the madness.

How else to explain the summer of 2011 when we knew that Cesc Fabregas was leaving and that Samir Nasri was likely to go too – by the way, how interesting were his recent revelations about meeting Ferguson in Paris and how he and Mancini would talk every day on the phone?

But anyway, back to those heady days when we knew those players were going to leave so instead of finding some midfielders to replace them, we sent Sir Dick of Law to Costa Rica to spend ages signing Joel Campbell who then couldn’t get a work permit and was farmed out on loan every season, and a little farther away each time too (France, then the south of Spain, then Greece). If he hadn’t come back this summer I hear we were going to loan him to Christmas Island Rovers.

Only when the window was about to close did we think, “Er, you know a midfield and some defenders and maybe a striker would be quite good, BUY ANYTHING!”, and two of those signings worked and the other two really, really didn’t, but it was so shambolic and ridiculous that it felt almost impossible for any professional organisation to make a bollix of it that badly.

Now, this January is far removed from that. The team in general is in much better shape, yet we’ve known we needed a central defender since … ooooh … last summer, and certainly when the window closed in August and Laurent Koscielny’s Achilles tendons went on strike.

We had a top-heavy squad, overloaded with forwards (some of whom rarely played) but understocked with defenders, so what do we do? We loan out two forwards, lose another defender to serious injury and send our transfer fixer to Poland to sign a teenage midfielder.

It’s like an elaborate piece of performance art. If Arsene Wenger did his next press conference in mime before sawing off one of his own legs and doing a blood painting of Herbert Chapman on the wall of the training ground I wouldn’t bat an eyelid. It’s no less weird that what’s come before it.

Perhaps we’ve sent Dick to Poland to get him out of the way while we do some real business. I suspect, however, that’s wishful thinking on my part. Even the young Ipswich fella is off the radar this January, at least, and it’s not as if there’s a plethora of top quality centre-halves flooding the market right now. In short, I have no idea what’s going on and trying to figure it out hurts my brain so I’m going to stop.

Meanwhile, having dispatched Lukas Podolski to Inter Milan we’ve now sent a rather forlorn looking Yaya Sanogo to Crystal Palace on loan for the rest of the season. The manager wanted him to stay in the Premier League, which I understand, and how he fares there should really give us better insight into the player and his potential.

I do think there’s something to be read into the fact Arsene Wenger started him in the FA Cup 5th round, the quarter-final against Everton and the semi-final against Wigan, not to mention against Bayern Munich in the Champions League (a game made difficult by the sending off of Szczesny following a Robben dive, but I do recall people being impressed with how he put himself about that night).

Perhaps it was because folks were a bit of tired of Giroud who was struggling for form and his hotel escapades had seen him disciplined by the club, but those were make or break games for Wenger and he put some amount of faith in Sanogo. It’s also worth remembering that when he came on in the cup final for Podolski we looked more dangerous than we had. Some of it might have been the natural momentum of the match, but he worried the Hull defence a lot more than the ineffective German did that day, and it was a change which had a real impact on the game.

This season he’s behind Giroud, Welbeck and Alexis for a centre-forward position and a loan move makes a lot of sense. If he can get regular playing time, and a few goals under his belt, it might be just the kick-start he needs. Although never my favourite player, Alex Song’s loan at Charlton transformed him from ugly duckling to slightly less ugly duckling, so these things can work.

It’s too early to write Sanogo off, that’s for sure, but also too much of a stretch to say he’s going to come back a man transformed, ready to start banging in goals. It’ll be interesting to see how he gets on there, especially as the pressure of a relegation dog-fight kicks in. It’s something of a culture change too, so how he copes will be something to watch.

The next bit of transfer news we get is likely to be confirmation of Benik Afobe’s permanent move to Wolves and there’s some talk we’re offering Chuba Akpom a three year deal which is grand but his current contract runs out in June and there’s no way we haven’t offered him something before now so that suggests a reluctance on the part of the player to commit. And with the players in front of him who can blame him?

Right, time for me to recite the first 1000 words of Paradise Lost backwards while riding a unicycle holding a piglet dressed as an Andy Warhol lookalike.

* contains no actual explanation. Arseblog is regulated by the bloggle regulator. Terms and conditions apply. Allow 28 days for delivery. Made in Taiwan.