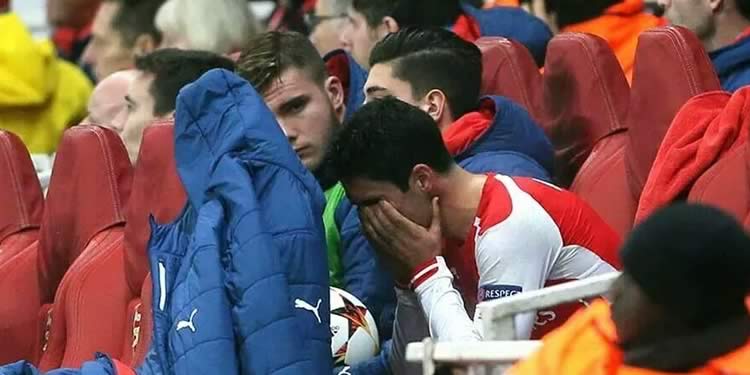 As expected the big transfer news yesterday was the sale of Benik Afobe to Wolves for around £2m, no doubt with the typical Arsenal sell-on clause involved too should he really start fulfilling the potential the club saw in him.

Highly regarded but hampered by a couple of bad knee injuries which stopped his development and his chance of catching the eye in the Capital One Cup by Carling etc, the loan spell at MK Dons was very much shop window territory, and boy did he put himself in it. 19 goals so far this season mean he’s moved up a division to a side that will be looking for a play-off place to play Premier League football next season. Best of of luck to him, and for more reading on him there’s a good profile piece over on Jeorge Bird’s site.

Meanwhile, Dick Law continued his Polish adventure yesterday and reports from the local press suggested a fee had been agreed for 17 year old Krystian Bielik. I know it’s easy to have a laugh but there really isn’t anything wrong with this kind of signing. If we spot potential there’s no reason why we shouldn’t try and snap it up, and who knows what this lad might achieve.

It’s quite possible for signings like this one, and the ones that we actually need right now, to co-exist. One does not preclude the other, it’s just that when the other doesn’t look like it’s going to happen, there’s a measure of frustration because, well, we’ve been here before. All we can hope is that the lessons of those times have been learned.

In general it’s been a pretty quiet transfer window so far. We’ve loaned out a couple, Man City have spent £30m on a striker who is off to the African Cup of Nations, and that’s really about it. Things do tend to get a little busier towards the end, as much as we’d prefer us to come out of the blocks flying and do the business we need to do as soon as it opens, we’re also dictated to by the market.

Of course this is me trying to instill some hope in myself by thinking rationally about the way things operate and the way that we operate in general. The Mirror this morning has a rather vague story about us wanting TWO players this window. Blimey. That’d be like getting a free Cadbury’s Creme Egg with another Creme Egg inside it. Or something.

Whatever is going to happen, or not, it doesn’t look as if there’ll be any additions to the squad ahead of Sunday’s game with Man City. I’m therefore making the assumption that a week between games is enough for Laurent Koscielny to be fit and ready to play, because despite the midfield absences, I still think a central defender is our most pressing need.

After City there’s week to the Brighton game in the FA Cup (one in which he’s bound to ‘rest’ a few), and then a further week before we play Villa, and the day after that game is the day the window closes. So I don’t suppose the manger is feeling any real pressure, even with the Debuchy injury. If he’s got his first choice central defensive pairing for City, and options at right-back in Chambers and Bellerin, the situation is not as urgent as it might be.

Meanwhile, the Guardian are reporting that Mikel Arteta is likely to be out for ‘many more weeks’ as he finds recovery from calf and ankle issues problematic. While it’s obviously a shame for the player, it’s also bad news for us too. I’m fully aware that he’s in the late-September of his career but he’s an important presence for us, a calming influence and a great distributor of the ball.

For all the clamour for the tough-tackling, whirling dervish of a DM, sometimes a bit of calm is a good thing and I can think of a few games recently where having a player who can simply regularly find a teammate with a pass would have been hugely beneficial.

I wonder too if it will have some impact on what happens in the summer. There have been suggestions that an extension to his contract has been agreed, but so far nothing has been announced. Perhaps it’s common sense – making that announcement when a player is out injured is probably not the optimal time to do it, but his current deal runs out in June so the clock is ticking.

And while I would also very much like to see us go out and buy a player for the position he plays in, I still see benefit in keeping him around. He’s an intelligent man, a model pro, a good leader and example – it’s not hard to find other players waxing lyrical about his influence in the dressing room and beyond – and we’ve been too quick to let qualities like that go in the past. Fingers crossed he’s not as long as the article suggests.

Right, that’s that. Back tomorrow with an Arsecast and we can start looking ahead to Sunday’s trip to the Middle Eastlands.