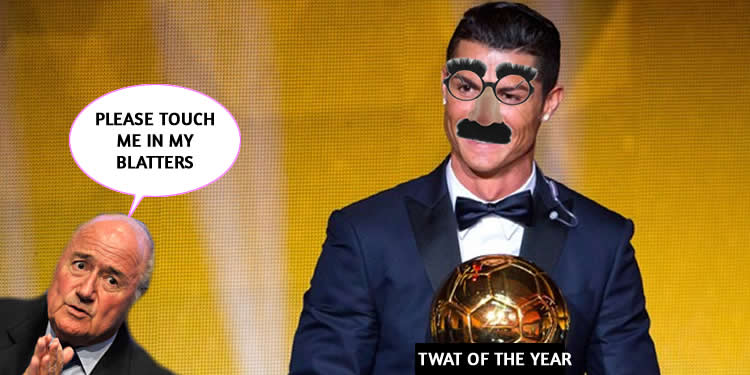 Did you watch any of that Ballon d’Or nonsense last night? Not for me. I don’t need to see Lionel Messi wearing a suit that nobody else would wear. Or Cristiano Ronaldo groomed to within in inch of his life. Or any of those other people in FIFA doing things. Somehow they’ve convinced people that this shit matters when it really, really doesn’t.

The only vague interest I had was in who won the Puskas Awards for Best Goal and with Irish woman Stephanie Roche in the mix that was something, but in the end she lost out to James Hamez Jamie Lannister Bender Rodriguez. All the same she got over 33% of the vote and came second with Robin van Persie’s repulsive sickly dolphin header coming last, quite where it belongs.

I thought our pal Philippe Auclair made an excellent point about the goals selected though:

Three goals selected for Puskas award. Not one of them the true expression of a collective. Like choosing the solo, not the song.

Football is a team sport but none of the goals were representative of that, which is a bit of a shame. There’s a lot to be said for a goal which uses the collective rather than just a moment of brilliance from a single player.

But then perhaps it was the wrong awards show. The gala last night wasn’t really about football, nor did it have anything to do with the team, it was about the fetishisation of individuals. Making sure that the stars feel special and better than everyone else which, of course, they are (at football).

It’s a chance for the spotlight to shine on them for once – for they have so little opportunity for that kind of thing; for people to tell them how great they are; for sponsors and hangers-on to bask a little in the limelight; and for FIFA to put on a carefully planned PR show which everybody laps up.

If there’s going to be criticism of football’s governing body, the way it’s run, the shit it gets away with and that horrendous racketeer at the top of the organisation, why does this event get a free pass? Are people afraid of hurting the feelings of millionaire footballers who might have their moment in the sun slightly marred by a bit of criticism?

Would said footballers even care if an influential voices were to write an opinion piece in a newspaper or magazine suggesting that if there are serious issues with how FIFA operates that we shouldn’t pick and choose when to criticise just because people are wearing nice suits and frocks?

I just find it all a bit odd, maybe that’s just me though, and the inanity of the whole thing was summed up perfectly in the speech of the winner of the Golden Testicle:

“To win a trophy of this kind is unique,” said Cristiano Ronaldo winning the award for the third time in his career. You said it, buddy.

Meanwhile, from an Arsenal point of view there’s not a great deal happening simply because we won. There’s no inquest, no sniping, no drama and dammit if that isn’t great. It makes for an almost peaceful existence. My advice is to treasure these moments until the next time we don’t win a football game and it all kicks off like it’s the worst thing that could have happened in the world ever.

We wait for news of Mathieu Debuchy’s collar bone with the Mirror saying this morning that it could be three months out if he needs an operation. It was suggested to me on Sunday that even if he did need a small op to pin the shoulder the expected absence was six weeks, but I guess we’ll find out soon enough. One can never underestimate how long a player is going to be missing at Arsenal. This is known as the Diaby Complex.

It means that we’ve got a right-back issue again and it impacts further on our defensive depth. Kieran Gibbs is currently out so we need Monreal at left back but with Koscielny still struggling and hobbling through the game against Stoke we also need centre-half cover but that then comes from Calum Chambers who is the most likely candidate to fill in at right back.

For a longer discussion about the merits of Chambers v Bellerin, you can check out this week’s Arsecast Extra during which we have a chat about that (amongst other things), but regardless of that it makes the need for a defensive signing all the more urgent.

I’ve been impressed with the development of Bellerin, even if it’s still very early to make any real judgements about him, but I think the manager will use Chambers in place of Debuchy for the most part. He can use the Spaniard and push the former Southampton man into the middle if necessary, but that’s us stretched to the very limit defensively.

Whatever we’ve got our scouts doing this window, whatever plans we might have, I think there needs to be some urgency injected in proceedings and a decision made on one of the targets we must surely have (haha, I know, I know). I am now officially holding my breath, surely a transfer is imminent …

… Ok, breath holding a bad idea. I like living and that, so maybe I’ll just keep fingers crossed.

Apparently Dick Law is going to Poland today to seal the deal for the Legia Warsaw youngster. Shades of the Joel Campbell situation here, he’ll spend three weeks chasing his own arse, eventually finding the right agent, convincing him to sign, then we’ll loan the player out for the next four seasons before we’re in such a state that one good game he had in the Danish HyperCup semi-final (shown on Eurosport 2 Extra + 1) will convince everyone that he’s the answer to our midfield problems.

In the meantime, Jaques le Stump will sign for Man United and we’ll be forced to play Flamini at centre-half.