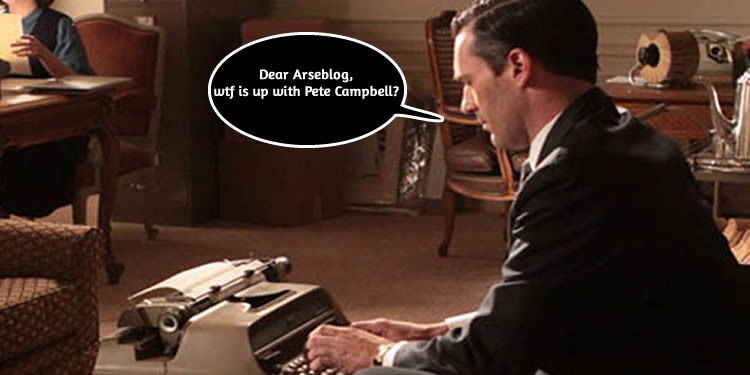 I get many emails, and I always manage to answer them even if it does take me a while to get around to them (if you’re still waiting, bear with me).

But right now, given the time of year and what’s going on, there are some that it’d be better to address on the blog itself rather than in private. This one, for example, comes from Norman in South Worcestershire who says:

Dear Arseblog, thanks for the blog every day. I’m concerned that quantitative easing won’t have the impact many people hope it will and do you see this as the answer to both our economic woes and the injuries we endure season after season.

ps – My favourite album is Hysteria by Def Leppard as I’ve always had a thing for one-armed drummers.

My take on quantitative easing is that it’s one of the best kinds of easings. To my mind it’s right up there with Perfumed, Slippery, Equine and Parsimonious as the kind of easing that I enjoy most. I must confess, I’m also a fan of unquantifiable easing, as I like to live life on the edge and for it to have that bit of spontaneity that can spark my creative side.

ps – Good album choice, but if one-armed drummers are really your thing then I suggest you check out the early works of Mingus Muldoon, the Offaly jazz supremo whose kit-slapper was Bobby Shoulders, ironically named because he only had one having lost the other in the Irish civil war when a large chunk of an exploded building fell on him.

pps – As for the injuries, would it surprise you if the club’s relentless capturing of youngsters who never make it was so Arsene Wenger can be kept young by drinking goblets overflowing with their bone-marrow and stem cells. That’s right, Wenger is a succubus but nobody will ever print the truth. They all know, especially John Cross.

It’s fun when people get in touch and we can share our love for the club, but the variety and depth of people’s knowledge never ceases to amaze me. Take this one, for example, from a reader who says:

did you know that the man who currently paints the lines on the Emirates pitch has a connection with the club that stretches back to 1913? His great, great grandfather ran the newsagents close to Highbury and every day, as the great new stadium was being built, club officials would come in to purchase their copy of the Times? He became so well known that he was often invited to watch matches from the Director’s Box (or the Director’s Balcony as it was back then), and it was at one of the post-game, ether-fueled orgies that he met his future his wife who would go on to give birth to the man who fashioned the first red and white kit the team ever wore having been selected by none other than Herbert Chapman who loved the job he did on mending his britches (Chapman had an enormous package and regular pants left him in considerable pain).

I did not know that. Thanks for letting me know. I have always felt there’s been a knowledge gap when it comes to the groinal areas of old managers, although I do remember a barman in the Bank of Friendship singing a plaintive song about Terry Neill’s hernia one night. Fun times.

Because we now live in a world where football is available to everyone, with streaming and TV deals, there are new fans who seek to understand the game a bit better. Like this one:

I was watching the game against Brighton the other day, and I couldn’t get my head around the goal in the first two minutes. Why didn’t the defender karate chop Calum Chambers, then boot him in the head, eviscerate him, wrap himself in the Arsenal player’s innards and do a war dance to make it quite clear that any further attempts to use skill and football ability wouldn’t be tolerated?

Hope to hear from you soon.

Robbie, halfway up the BT Tower.

it’s because acts of violence, like smashing a player or booting him into ‘row Z’ or ‘clattering’ him, are not allowed. There’s this thing called ‘tackling’. It’s when one player uses his footballing ability, his reading of the game, and his feet, to take the ball away from an opponent without maiming him or causing him serious injury.

I realise this is a new concept to you, but I suggest you try and get your head around it.

ps – Thanks for including the signed picture. It was quite terrifying. The beard looks like somebody mashed a disgruntled porcupine into your face and the yellow suit gives you the appearance of Frankenstein’s banana. On PCP and a promise.

And of course, there are the ones who aren’t so friendly but still take the time to sit down and write an email. Where would the world be without them?

your a dick and you sound like an irish terry woegan.

I don’t tend to reply to them because they hurt my feelings too much. Still, it takes all sorts and you have to take some of the rough with the smooth.

Right, that’s really about it for this morning. If anything actually happens, like that Gabriel fella becoming official, you’ll find it over on Arseblog News.