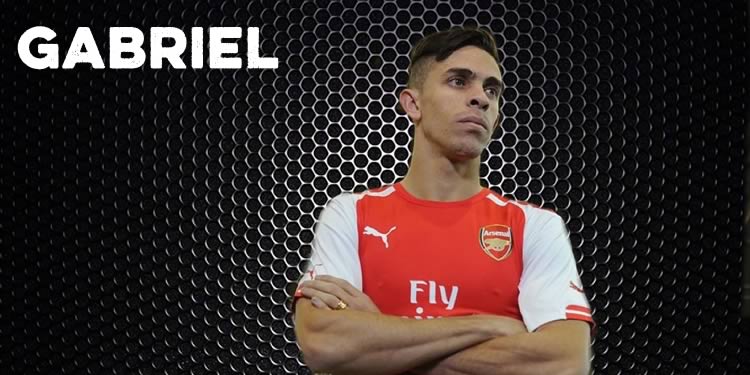 Only one place to start this morning and that’s the official capture of Brazilian defender Gabriel from Villarreal.

It came at a time when people were getting a bit antsy that it hadn’t been announced, especially given that Joel Campbell was well and truly ensconced in Spain, but there was nothing at all complicated about that side of things. He’s fully entitled to work anywhere in Europe whereas we had to sort out all kinds of stuff for a 24 year old who, under the current rules, really doesn’t tick any of the work permit boxes.

Anyway, it’s all done and dusted now, we have the pictures with the shirt and all that – although we’re still waiting to find out what number he’ll wear. Unless he’s got some kind of personal preference for a weird digit, the fact that number 5 is free and is a nice, traditional centre-half number, should see our 4, 5 and 6 sequence complete in the centre of our defence.

Speaking about the move, Gabriel said it meant a lot that Arsene Wenger wanted him, and that he was ‘anxious’ about moving to such a big club:

I am very anxious and that is something that is normal to a young player, playing at such a high level. So I am very anxious to be able to start at this huge, beautiful stadium, a stadium that the fans come to, to be able to support us. It’s something I’ve always noticed when I watch Arsenal. I’m really looking forward to training with my new team-mates, to get to know everyone and to have a good start.

He seems a very earnest young man, but I did like this answer when he was asked what he’d seen of Arsenal this season:

The few games I have watched and witnessed, during the season, I saw that there is room for improvement. We have a lot to conquer because Arsenal is a very big club, we must always be at the top. I think it’s a club that will keep growing throughout the season, and that over the next few years we will be able to win important titles.

Heh, diplomatic enough but still bang on the money. He could have gone down the ‘Arsenal is a great club …’ blah blah blah, but there’s no beating around the bush there. There is room for improvement. I also like his attitude when talking about playing and securing a place in the team:

While respecting everyone, I want to play for my place in the team. I know that is not going to be easy, I must show my potential, I have to show that I can be in the group, that the manager can count on me. The same goes to all my team-mates. I will carry on the same way I have been since the beginning of my career. I have always respected everyone to get to where I am in my career, and I want even more.

Good stuff. As I said this week, it feels like we’ve identified a player who isn’t fully developed yet but who possesses the raw materials and potential to become a very good defender. By all accounts he’s quick, strong, good on the ball, and plays for a technically sound Villarreal side that isn’t too dissimilar to Arsenal in terms of its style of play. He might find England a bit more physical but he won’t be the first or last player to have to deal with that.

Not only does he provide genuine cover for Mertesacker and Koscielny, as well as taking some of the pressure off Chambers, he should also provide competition in that area of the pitch, something we haven’t had for quite a while. We’ve had stand-ins and fill-ins, but if Gabriel develops the way they hope, then he’s one for the long-term and that’s a healthy thing.

It also means that we now have a squad that is close to being properly balanced for the first time this season. Three forwards, who played little, have left on loan and we’ve added the defender that should have been brought in last summer. It feels a more rounded group of players, even if it has been streamlined somewhat, and there’s a competitive atmosphere around the squad that will hopefully get the best out of all concerned.

Szczesny has to fight to get his place back from Ospina; Chambers and Bellerin are going to scrap over right-back, as Gibbs and Monreal will over the left back position; there’s plenty to choose from in midfield; and up front the manager has to find a way to keep a clutch of very good players happy – and the onus is on them to ensure they perform to a level which keeps them in the forefront of his mind. Maybe it’s a bit too optimistic after some of the stuff we’ve seen this season, but I hope it’s point from where our season can really kick on.

Meanwhile, interesting news that Joel Campbell signed a contract extension before he went on loan to Villarreal. I suppose the first thing you’d say is that it suggests that the door for him at Arsenal isn’t fully closed. His previous deal ran until 2016, so it wasn’t as if he was leaving imminently. Perhaps a good spell in La Liga, and some goals, will convince Arsene Wenger who obviously isn’t 100% sure about him yet.

He doesn’t have enough faith in him to play him regularly for us, but also sees enough not to let him slip away like so many before him. Of course if he doesn’t do the business in Spain, it means our bargaining position when we do go to sell him is stronger.

It’s also not the first time this has happened. Ryo Miyaichi signed a new deal before being loaned to FC Twente this season – but again I think that was a ‘protect the investment’ move rather than one which hints at a future with us. Anyway, it’s down to Campbell to make his mark and give the manager something to think about come the summer.

Right, that’s that. We’ll have a Tim Stillman column for you later on, and I’ll be back tomorrow with an Arsecast. Until then.