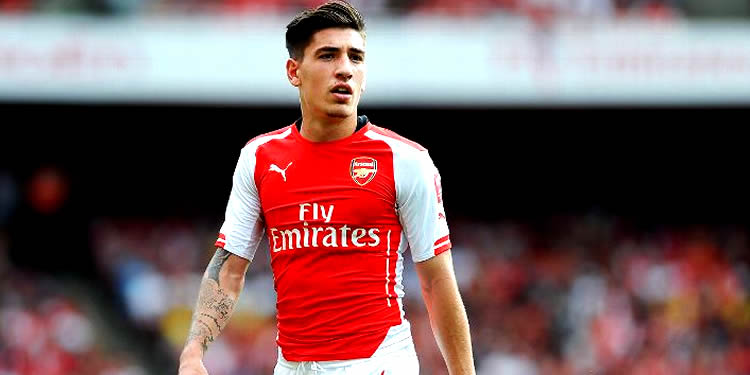 In evaluating his Arsenal career thus far, it’s hard not to feel sorry for Mathieu Debuchy. An unjust red card in the Champions League qualifier and two freak injuries have restricted him to just 14 appearances, including a couple out of position at centre back. Back in September, his initial ankle injury threw Arsenal into a sort of disarray. Here in January, situation has changed somewhat.

The difference between then and now is the continued and accelerated growth of Hector Bellerin. In September he had all of 25 minutes of game time for Arsenal to his name, as well as just eight Championship appearances from his loan spell at Watford. He has long been considered by many to be the future successor to the right back role, but throwing him straight in after Debuchy’s first injury would have been unwise, and potentially damaging.

Arsene Wenger appeared reluctant to do just this, at first using him mostly when only absolutely necessary. The team was adapting (slowly) to a new setup, to the extent that even the experienced defenders all looked uncomfortable. His apparent line of thinking was supported by the disasters at Dortmund and Stoke, respectively, wherein Bellerin featured and looked as uncomfortable as everyone else in the side. Laurent Koscielny’s injury only made for a more unsettled back line, and that malaise could hardly have been deemed a good learning environment for one so inexperienced.

The Spaniard did get games in between, impressing in the Southampton League Cup game and against Hull City at home and, after a slightly shaky entry, settling down well upon coming off the bench at Sunderland. His left back showing against Galatasaray passed by without much note, but it was his performance against Newcastle that not only caught the eye of many, but that seems to have been the foundation for his rapid recent advancements.

The question for Bellerin was about making his style work for him at the highest level. He is a strong tackler and reader of the game, and uses his blinding pace and engine to enable his front-foot, aggressive defensive style. For that high energy, committed approach to work, especially so close to one’s own goal, the defender needs to have full confidence in their actions. Anything less makes for the attacker being afforded more space; but obviously, in the early stages at a significantly higher level, that level of self-assurance will take a few games to emerge.

In his early games, it was clear he was more reserved. He trusted his ability one-on-one but rather than going towards the ball he would allow the runner to move closer to him instead of pushing out to them, relying more on his pace and endeavour to win back the ball, but his confidence has been visibly growing with every game.

Without watching properly, it is very easy to come away with a false impression of Bellerin. The technically able winger who gets shunted back to right back is a common tale, and with many there is a defensive negligence attached. What separates Bellerin from them is that his conversion process started so much earlier than most.

He has had 3-4 years to familiarise himself with the demands of defending, and he took to it extremely well as he came further and further through the ranks. His aforementioned aggressive, ball-attacking style, combined with reading of the game and speed allowed him to make interceptions higher up the pitch than most, and help convert defence into attack extremely quickly. And if those attacks break down, he can risk committing high because his pace allows him to get back into position.

However, for all his improving defensive ability, his greatest strength is his forward play. His proactive, combative style is even more prominent in his attacking, and his development at La Masia made for an highly technically accomplished player. He is an excellent crosser at both shorter and longer range, with the skill to create different types of chances to most full backs, and the occasional fierce shot. All the attacking prowess of the skilful winger, only with defensive awareness and ability to go with it.

The 19 year old has, of course, played somewhat more within himself in the first team than he did lower down the levels. He has been responsible in his duties, rarely if ever being caught too high up. As he continues to settle and grow, he should hopefully add that confidence-founded aggression to an even greater degree.

The pattern of his performances seemed to be mostly strong at home, and more uncomfortable away. Most (myself included) expected Calum Chambers would start against Manchester City, but the boss showed the real faith in the young Spaniard and that was fully repaid. A performance that accomplishes in such a game will only have enriched Wenger’s confidence in him, and indeed, his own in himself.

He has the chance now, with Debuchy absent and the spot in the team in his hands (for the time being at very least) to really assert himself as not only a challenger to being first choice, but maybe even the holder of the title. That being said, it is, of course, extremely important not to get carried away. Inconsistency and youth usually go hand in hand, and naturally there is patience required.

The maturity of Bellerin’s performance against the champions is cause for great optimism both short and long term. The next step is keep building; to replicate this kind of performance more often, and eventually to play as he did for the under 21s. There will be small issues to iron out — there always are — but these games suggest that his fundamentals are already mostly in place.

There should be much more to come from Bellerin as the weeks, months and years pass. He is the most talented full back to come through at Arsenal since Ashley Cole. And if he uses the window Debuchy’s injury has given him as his ability and potential dictate he could well do, we may be talking about a similar emergence story.

He has it in him to become something really exceptional.