Growing up in Strasbourg on the easternmost side of France, Arsene Wenger’s earliest football influences were mainly German. At the time, the most prominent rivalry was between Bayern Munich and Borussia Monchengladbach, one which transcended sport because both sides also symbolised opposing political viewpoints, and as such, it’s not difficult to guess which team Wenger was most drawn to. Bayern as Miguel Delaney writes for ESPN, supposedly represented the conservative south, pragmatic and mechanical, while Gladbach, nicknamed “the Foals” were more free-flowing, representing the youthful and modern north.

For a while, the two sides traded the league title back-and-forth, as well as finding success in Europe, though it was Bayern who would eventually race ahead. Gladbach, however, would remain in Wenger’s mind, and it’s them, along with Ajax, who Wenger said was the reference for his generation, from which he drew much of his ideas.

Wenger, though, says the purpose of team-building is “to improve, try to get better. You don’t try to copy. I try every time to add good players to the team based on movement and technique.” And that’s essentially where he is right now with his Arsenal team, albeit with an English flavour to try and foster the loyalty missing from past incarnations. When he tied down his quintet of Brits two seasons ago (Ramsey, Wilshere, Gibbs, Ox and Jenkinson), he said that his type of football requires “a bit of a blind understanding” and as such, we probably won’t see the fruition of it until the end of his contract. However, that’s also been the frustration of Wenger sides; that they are interminably under the thrall of progress and whatever progress they seemingly make in the process of a season, invariably becomes undone in the final stages by flaccidity in the defensive strategy or lack of mental strength.

We saw that again against Stoke City as Arsenal were frequently exposed by the routine long-ball. To an extent, Wenger’s hands were tied as he had no option but to select the reshuffled back-four but, for some, it goes back to the failure to properly drill his team defensively for such tests. (Though on the other hand, playing against Stoke, at Stoke, is such a one-off experience that sometimes you just have to wing it. Indeed, looking at the size of the team, all but Bojan were over 180cm tall. The only real way Arsenal could compete is by playing the game their way).

The reality, however, is that old-fashioned defensive training at the top-level is no more, no matter how much the old guard might loathe it. Indeed, as Gary Neville revealed recently, there is now an 80/20 split towards technical work against defensive skills. In fact, Wenger says that defending is much better these days, not individually, but as collective, forcing teams to attack better. That’s probably why there’s such a skewed concentration towards planning attacking moves because the majority of Arsenal’s matches happen in the opponent’s half. Yet Wenger also believes that sometimes the charisma and personality of your defenders can get you through tough tests and that’s why understandably he regrets the unavailability of Laurent Koscielny (something which Mark Hughes also concurred with, saying his absence gave his own team an edge).

The problem for Wenger, and for Arsenal, probably lies, not in the intensity of their defensive work, but the nature of their defensive strategy. Because it is thought that an effective possession game must be backed up a fully synchronised pressing system and this is probably where Arsenal have failed. Perhaps, they’re not suited to such a high-intensity game as they tried to play against Stoke because it requires concentration and awareness from the whole team. For a young, attack-centric side, the instructions are probably inherently too complicated.

Indeed, such an issue was even touched upon by Mario Zagallo, coach of Brazil in the 1970 World Cup. “We played as a block, compact,” said Zagallo in The Blizzard, Issue Three). “Leaving only Tostao up field. Jairzinho, Pele, Rivelino, all tracked back to join Gerson and Clodoaldo in the midfield. I’m happy to see the team in terms of 4-5-1. We brought our team back behind the line of the ball. Our team was not characterised by strong marking.”

It’s probably no coincidence that last season Arsenal broke their trophy drought by playing in a way that saw them drop deep and soak up pressure when it required them to (though in the cup final against Hull, they still managed to concede two goals from their weakness of the aerial ball). Indeed, even looking back at the defensive strategies of past Arsenal sides, pressing from the front was not the way they played. Instead, they looked to control space, defending in a compact block from back to front – with the added weapon of springing the offside-trap – and then attacking quickly with their front four plus Patrick Vieira. Over the years, Wenger has tried to adapt by playing a mobile and technical game. He says that standing still is “preparing the failure of tomorrow” and though it’s not entirely obvious the changes Wenger has made, as they tend to be more subtle, when things start to go wrong, he has not been scared to adjust.

In 2008/2009, after a stuttering first-half to the campaign, he discarded the 4-4-2 for a one-striker system for probably his first-time as Arsenal coach as his default formation. In 2011/12, he managed to save the season by pressing up the pitch, led by Tomas Rosicky; though most notable was the change in March of 2013 following a 2-1 defeat to Spurs, whereby routinely picked off due to their high-line and lack of pressure, Wenger managed rein some of that impetuousness in, firstly by discarding captain Thomas Vermaelen, and then playing in a compact defensive block.

Which leads us to this season and the 3-2 defeat to Stoke City. Arsenal tried to defend from the front but that strategy was frequently undone by routine long-passes from the back. As early as the first-minute when Peter Crouch scored, the midfield was too easily bypassed though worse was to come when Bojan stole in to score Stoke’s 2nd. In the post match blog, Arseblog was miffed as to how this could have happened, with none Flamini, Mertesacker or Ramsey seemingly aware of the situation yet nobody taking it on themselves to deal with Bojan’s run. As he writes, “there are reasons to be critical of the defence but we’ve spoken countless times about the job the midfield needs to do to protect them and they failed miserably yesterday.” 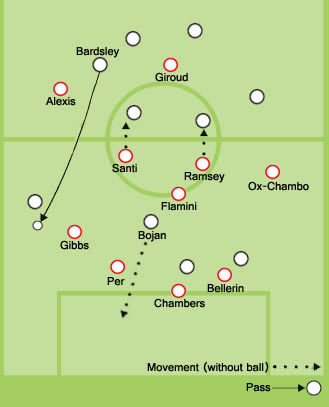 It’s the same point Mertesacker actually made himself after Arsenal’s 3-3 draw with Anderlecht, stating that it’s not good enough to defend with 5-6 players. The issue is that the pressing is too muddled, with the two in the middle, Cazorla or Ramsey not sure who should be the first man to press with often both going at the same time. The same thing happened for Diame’s goal in the 2-2 draw with Hull with Wishere urging Cazorla to press but when he did, left Diame free to run into the box.

That issue was exacerbated against Stoke as the back four decided to drop deep because they were coming under incessant pressure from long-balls, but with the midfield not following suit, instead pushing up the pitch. In that sense, it becomes more understandable that Wenger bemoans Koscielny absence as much as he does because his ability to intercept passes in the squad is unparalleled. When he’s not available that heightens the importance of the enforcer in front of the defence, but without a bona-fide destructor – though Flamini and Arteta are competent players in their own right – the Stoke City issue and playing against overly direct and physical teams inevitably prolongs.

It’s Jonathan Wilson, though, who most damningly sums up Arsenal’s structural issues, writing for Bleacher Report that Arsenal “have become a pantomime horse of a team: The front half set up to play one way, the back half another. The result this season, not surprisingly, has often been incoherence.”

Aaron Ramsey: Arsenal really need Ramsey to play-make again, to prod and probe for spaces in the final third, and to not force things. His goal, a sweetly struck volley from a corner-kick, came after taking a fairly clandestine position at the edge of the box and quietly stealing in. At the top of his form, this is what he did best: not just contributing to goals, but imposing himself on games starting from deeper positions, softly yet surely working his way up the pitch, deep, and then prompting attacks higher up the pitch.

Watching Ramsey against Stoke, and indeed the recent matches versus Dortmund and Southampton, you sense that he is slowly getting there, completing more passes and getting stuck in, and what is one of the surest signs of increased confidence for an “attacking” player, completing more dribbles. Again, his goal was such a clean strike, a part of his game you feel doesn’t come naturally to him but as he mentions in an interview with the Guardian, he has learned to compose himself in these moments so as to not shank his shots. In the past, because he plays on the edge of confidence and mental breakdown, it was uncertain whether he would find the bottom corner – and to an extent, still is uncertain – or suffer from a technical brainfart. Fortunately, his goal was of the highest quality, though not enough to inspire a full comeback.

Oliver Giroud: Is there another player who so readily fluctuates between very good and very poor as Olivier Giroud? On Saturday, we saw the return of the other side of Giroud, the side which we conveniently forgot about following two promising cameos against Manchester United and then Southampton. For the most part, his touch was poor and at 1-0, missed a fantastic chance to calm Arsenal’s nerves and level the scores. There are certain games his unique set of abilities are suited to and certain stages of the game, such as coming off the bench when defences are tired, when he is most effective. As such, the rivalry between Welbeck, who generally has been busy but a bit too nice in front of goal, might be managed by how Wenger rotates them depending on the circumstance – and not necessarily them ever playing together at the same time in the middle.

Calum Chambers: With the ease at which Chambers sometimes caresses the ball at the centre-back, it seemed obvious that he would line up on the left-side of the defence. Yet Wenger decided that his impetuousness would serve him better in the stopper position that Mertesacker normally plays, asking him instead to attack balls. In hindsight, it seemed a strange decision considering that Mertesacker is the more experienced player and that is his natural role. Maybe, Wenger thought Chambers’ know-how playing at full-back would help rookie Hector Bellerin. In the end, Chambers paid for his lack of discipline, getting too tight Bojan when he would have been better served to hold his position and read the game. But then again, that probably answers why Wenger used him on that side; Chambers needs to rein that side of his game and learn how to use his aggression at the right time. His biggest mistake, though, was the missed header that he attempted before the ball fell for Crouch for Stoke’s first goal.