Stoke 3-2 Arsenal: No positives from this humiliation

Where to start? Perhaps to find a nice word to describe what we saw yesterday. Abject? Woeful? Appalling? Atrocious? Diabolical? Abysmal? Disgraceful?

How about just plain old ‘shite’? Sometimes simple is best. We were absolutely shite in the first half, marginally better in the second, and we got precisely what we deserved from the game which was nothing. I watched a video of Per Mertesacker after the game and he described the display as ‘shocking’. I know where he’s coming from, but in the very real sense it wasn’t shocking because shocking is something you don’t expect to happen, and when you looked at the back four yesterday it felt like one that could be exposed.

For all the talk of playing Hector Bellerin so we could have a more natural back four, I think we can see why the manager only did that when he had no choice. Koscielny ‘couldn’t play’ according to Arsene Wenger, but we’re so short of players he was on the bench anyway. The young Spaniard is very raw, probably not yet ready, and Stoke away is a test for any experienced player yet alone one so short of games in his short career thus far.

Then there’s the central defensive issue. I get Chambers playing there, but why doesn’t he play where Koscielny plays? Why does Per move over to the left-hand side of the defence? It can’t be that Chambers has a preference at this point and it makes more sense to keep Mertesacker where he usually plays. It simply added to the imbalance, and with Kieran Gibbs patently not 100% either it meant we’d have to be super-alert and conscientious. So of course we conceded after 25 seconds.

The defending was poor all round, the ball fell nicely for Crouch and he tickled it home. And even then, after so little time, you felt like it was going to be one of those games. However, we had a chance to change the momentum when Bellerin did brilliantly to keep the ball in and get a cross to the back post where Giroud was waiting – the relatively simple task of nodding the ball into an empty net should have brought us level. Inexplicably, he headed wide. You just can’t spurn chances like that and we do it too often.

Considering how much we were struggling to get a hold of the game and to create, it was hugely costly. Instead of being level we found ourselves further behind after a really very smart goal from Bojan. We didn’t cut out the cross from the right, he timed his run brilliantly, nobody tracked him, nobody went with him, and his first-time finish was excellent. 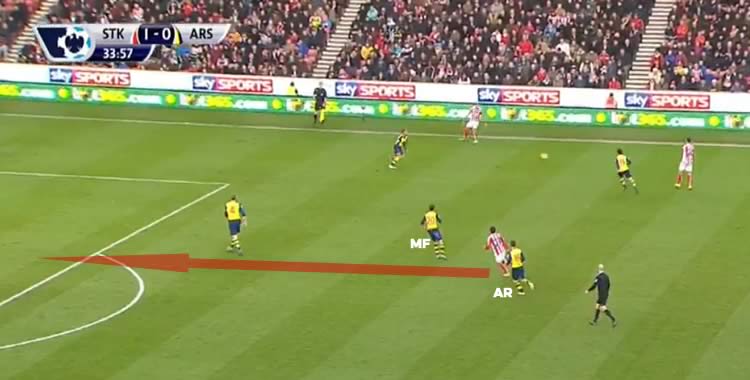 But both Flamini and Ramsey are aware of Bojan as he runs from deep. The Welshman simply ignores him as he takes off and jogs back watching; Flamini waves his arms a couple of times at Mertesacker to drop into the space, but he too doesn’t track the run. Then he waves his arms in exasperation as if there’s nothing he could have done about it himself. There are reasons to be critical of the defence but we’ve spoken countless times about the job the midfield needs to do to protect them and they failed miserably yesterday.

The third goal was an illustration of how panicked the Arsenal defence had become. Too many men tried to win the header, Crouch nodded it down and there was Walters to smash the ball into the roof of the net with nobody anywhere near him. Not lack of effort this time, but a lack of organisation and defensive discipline.

Welbeck for Bellerin at half-time with Flamini moved to right-back showed some attacking intent. Alexis almost scored one of the goals of the season, driving from halfway through their defence, around the keeper, leaving Shawcross on his arse but sadly hitting the post. It would have been a beauty, and what positivity he has, but it’s clear he needs a rest. It’s been a heavy burden carrying this team for so long.

Stoke then had what would have been an utterly humiliating 4th ruled out for a player being offside and interfering with play, and if that decision had gone against us I’d have been pretty pissed off. Then we got a penalty which Cazorla tucked away, and a minute later Ramsey volleyed home after a corner wasn’t cleared and instead of being 4-0 it was 3-2 and we had some measure of momentum.

That was taken away when Calum Chambers saw red, rather harshly I thought, for a foul on Bojan but no more than a foul. He made two fouls all day, and got booked for both of them. It’s harsh when you look at them in the context of the game. Peter Crouch was given just a talking to for a very obvious straight arm to Chambers face in the first half, an incident which was, at least, a yellow card. When he did it again to Mertesacker early in the second he was rightly booked – but why does he get away with the first one. How is that more worthy of discretion from the official than a bit of midfield tussling which saw Chambers get his second booking?

Then again, this is a referee who actually gave Stoke a free kick when Bardsley came sliding in over the ball and caught Alexis early in the game. This is a referee who allowed Charlie Adam to do this to Alexis and only gave him a yellow card. Remember, if you ‘raise your hands’ to a player’s face you’ll see red automatically, but putting him in a choke hold isn’t a red card offence? Even the Stoke fan looking on in this GIF can’t quite believe what she’s seeing.

Now, I’m not blaming the defeat on the referee in the slightest – I just want to make the point that as the refereeing standards get worse and worse, Anthony Taylor stands out as the most utterly incompetent official of them all. I know fans always think refs have it in for their team, and I realise I’m not exactly objective here, but he is, by any standards, shit at his job.

So, with 10 men any hope we had of getting something from the game was realistically gone, but again this is not apportion blame to the referee for that or use it as an excuse. The game was done because we were 3-0 down at half-time and played like pissed-up wombles for the first 45 minutes. It was down to the fact that the manager’s decision to gamble on a 6 man defence to get him through the season (or at least until January) has backfired once again and cost us Premier League points.

I know it’s self-evident, and it feels a bit like banging your head off a wall even talking about it, but 99% of the problems we’ve had this season are because we’ve had no defensive stability and depth. Losing Debuchy was a blow, of course, but being unable to cope with the loss of just one central defender is simply not good enough.

Sure, we’ve had some midfield injuries and things haven’t always clicked from an attacking point of view, but fundamentally our issues are defensive. They have been since the start of the season. Things have become worse with the absence of Debuchy and Koscielny, we’re now playing unfit players simply because we don’t have anyone else who can do the job, and it’s no surprise that these flaws are being exposed because every opposition manager can see them and look to exploit them.

It’s not bad luck, it’s lack of foresight and preparation. We can dress it up any way you like, but the buck stops with the man who stopped spending before his squad was complete in the summer, and this is the not at all unexpected consequence of that. And to hear the manager suggest that there were ‘a lot of positives‘ after the game is mind-boggling. We got turned over with ease by Stoke and he thinks there are positives?

I’m all for the idea of not railing angrily in the immediate aftermath of a game, but some admission that the performance was not good enough would be welcome. It doesn’t have to be furious and incoherent, but a little mea culpa, a bit of simple understanding after a game like that would be something to cling to this morning. Instead you can’t help feel that there’s no intent to accept responsibility for what happened. Instead we hear there were positives.

There were not. We lost badly. We played badly. We have reacted badly. Arsene has managed badly. And with a lot of football to play over the next few weeks, it could get worse.