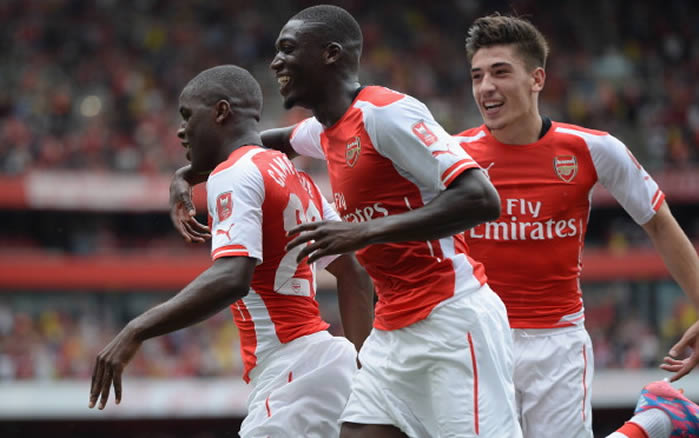 Morning all. I kinda slept it out but it’s a bank holiday Sunday so it doesn’t really matter. That said, I do have a pile of stuff to do today, so here are some quick thoughts on yesterday and the thumping 5-1 win over Benfica in the Emirates Cup.

He’d fluffed his lines twice before Aaron Ramsey set him for the first goal, so it looked like it might be another one of ‘those’ days for the young French striker, but after that first goal went in he played like a big weight had been lifted from him.

A hat-trick, then four, and you can’t help but be pleased for him. The goals don’t count officially, of course, as this is just pre-season, but all the same he needed them. Arsene Wenger has always had an eye for a striker and obviously sees something in Sanogo that few have until now.

If you look at his goal scoring record before he got injured, it is quite frightening. You could see when he scored the first goal today, suddenly they came raining. He has a big future here, or course, he is 21. He has something of Adebayor. He is strong, a strong body, similar strengths, but as well technical skill.

A Gerrard-esque barb at Adebayor in the midst of that praise, which is classic Arsene, but perhaps the use of Sanogo in massive games last season wasn’t simply about putting pressure on Giroud. It was a show of faith in his talent.

Hopefully he can kick on from here. Some goals in what’s essentially a training match aren’t enough to change hearts and minds just yet, but without the burden he must have been feeling, maybe we’ll see a player with more freedom and thus a more effective one. Just a shame he looks like he tweaked a hamstring late on.

I liked what I saw from him, I have to say. Effective going forward, didn’t seem unwilling to do his defensive duty, and the finish for his goal was genuine quality. He faded in the second half and I suspect that he’s going to have to work hard on his fitness, however, there’s a boost with the manager confirming that right now he wants him to stay at the club for this season.

There is no reason to let him go. I want to keep him.

I do think what happens between now and the end of August might have an impact on his future. If he works hard and contributes, then the manager’s mind will be made up, but what he says is still a bit open-ended. All the same, he had a chance yesterday to catch the eye and he certainly did that.

It’s interesting that he played his first Arsenal game at centre-half. Perhaps, using the fact that Nacho Monreal played there too, it’s because the manager had little choice in that position, but he acquitted himself well there. He looks very calm at all times, especially on the ball, and positionally he seemed well aware of where he should be.

I thought he played very well, was intelligent, good decision-making and calm on the ball, good in the air. He is 19 years old, and what he did is very promising.

I wonder if we do sign a centre-half if it might be somebody a bit grizzled, in the age bracket of a Squillaci, because Chambers versatility gives us the depth we need in that position. I guess we’ll see.

There was also the debut from Alexis (who wants to be known as just ‘Alexis’ apparently) and, despite the fact he’s clearly a fair way from full fitness, looks hugely exciting. There’ll be more to come from him, no doubt.

I also thought Hector Bellerin, at right-back, was really, really good. I think he needs to bulk up a little bit, but that’ll come with age and some time in the gym, but he was quick, effective from an attacking point of view, and wasp-ish in defence. Could he understudy Debuchy while Chambers plays elsewhere? I like all these possibilities, it’s fun.

Today we’ll see players like Giroud, Koscielny, Debuchy and more get their first taste of action, and not a moment too soon. We have the Community Shield next week which, although it’s just another glorified pre-season friendly, comes with a little more of an edge. It’s a game we’ll be using to condition our players properly for the opening day, so the intensity racks up a few notches.

Whether Monaco provide more stern opposition than the rather toothless Benfica remains to be seen, but yesterday was a good work-out which yielded some positive stuff, so let’s hope for more of the same today.

On which I will report tomorrow, have a good Sunday.