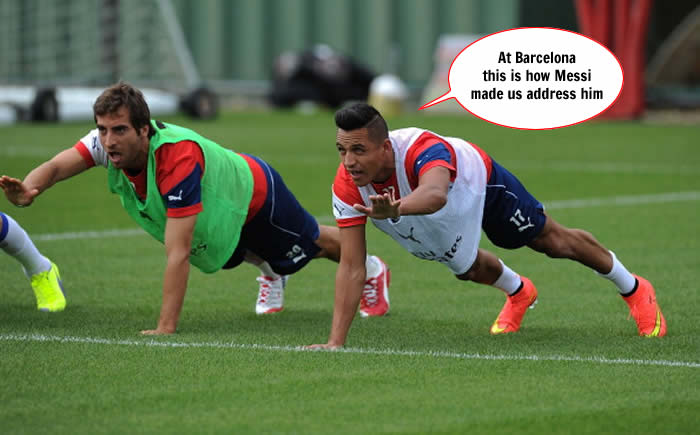 Pre-season kicks up a slight notch this weekend with the Emirates Cup up for grabs. Arsenal, Monaco, Benfica and Valencia will battle it out for the trophy. We face Benfica today and Monaco tomorrow, which must make Valencia feel like total gooseberries. Coming all this way to just play one of those other two.

For Arsenal fans it’ll be the first chance to see some of the new signings. Not David Ospina though, he’s got a little bit the thigh problem, but Debuchy and Chambers should make their first appearances, while there’s a Sunday cameo planned for Alexis Sanchez (and he may even feature at some point today).

The boss has been talking about why he signed the Chilean, and pointed to his versatility, saying:

I like the fact he can play left, right, up front and that’s why I went for him. At the moment I want to see him in both positions. But I took him because he is a player who has the qualities of Walcott, he goes behind the defenders off the ball. And with the quality of his runs he can be very important for us.

I don’t think it’s too big a jump to suggest that when he talks about the runs he makes, he’s looking for Sanchez to give Ozil the outlet he thrives on. With Walcott back soon enough, the German’s laser-guided passes will have more targets than an Angry Bird and that’s only a good thing for us.

Speaking of our Germans, they’re not due back to the club until August 11th, yet there’s still a chance that Per Mertesacker could make the opening game against Crystal Palace. Ozil and Podolski are not expected to be in contention until a few games after that but apparently Per is being considered. Perhaps because he’s so naturally fit and in good shape, but it’s hard not to think that the circumstances are more the issue than his fitness.

With Thomas Vermaelen currently injured (or indeed ‘injured’), that leaves only Laurent Koscielny as a central defensive option. So, using Mertesacker isn’t simply a case of having to make do, it’s really the only choice we have. Unless, of course, we buy somebody, something the manager hasn’t ruled out.

Once again he talked about the possibility of Vermaelen leaving which leads me to believe that’s as good as done. When Arsene says that he wants a player to stay but addresses the possibility of a move elsewhere, it usually means he’s off. Whether that’s to Manchester United, as reports have suggested all summer, or to Barcelona, remains to be seen. While I’m not convinced he improves United in the way the Dutch Skunk did, I think I’d still prefer to see him go abroad somewhere and Barcelona is a much nicer place than Manchester.

Either way, it’s difficult not to see a centre-half being purchased before the window closes, and the boss says he’s ready to keep spending, although he’s looking at using the rest of the window in a more traditional Arsenal way. Asked about his business so far, he said:

I’m very happy because I did what I wanted, and I am still open to do more. Let’s not forget that we are at the first of August today, and the transfer window closes on the 31st. I think the second half of August, the 15th to 30th, will be busy again.

Everyone takes a breather at the moment because everyone checks in their preparation games what they still need. People have done the biggest part of what they want to do and the last part will be done after the preparation games to see what you miss.

Which makes sense, although even without the pre-season games we look light at centre-half but I’m sure that’s a situation that’s well under control. Anyway, this is a far more enjoyable pre-season/transfer window than we’ve had for a long time and I’m sure we’ll get what we need.

Another interesting feature of the Emirates Cup will be Joel Campbell, keen to impress. He talks about how he feels he’s ready to be an Arsenal player, while the boss says:

He is part of my plans. He might play tomorrow against Benfica.

However, he’s going to have to get used to the idea of not playing as regularly as he has for his loan clubs. If he’s good with that, and he’s prepared to dig in, then perhaps he’s got something to contribute to the new campaign. Let’s see.

If you missed yesterday’s Arsecast Extra, you can get it right here. James and I discuss the new signings, Jenkinson’s departure and answer questions about Jack Wilshere, more signings, central defenders, favourite Kanu moments and pubic wigs (kinda). It’s good for what ails ya.

Finally, if you are going today, I’m sure you’ll be having a pint in The Tollington before the game. While you’re in there, you can pick up a copy of the new book which they have behind the bar. You get the book and the set of illustrated postcards, just ask!