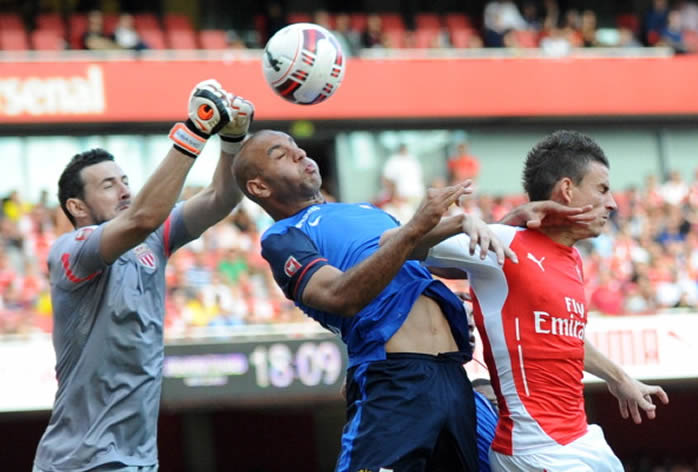 After the 5-1 win over Benfica lifted spirits, it seems the 1-0 defeat to Monaco has somewhat dampened them again.

I have to say I wasn’t paying a great deal of attention to the game and the loss doesn’t bother me unduly. Monaco’s league season begins next week and this was part of their final preparation for that. On the other hand, we’ve got a couple of weeks to our first proper game of the new campaign, and the fact that the World Cup has impacted on our pre-season was blindingly obvious.

The players are at varying stages of fitness. From the ‘not ready at all‘ Giroud to the ones who’ve been spared travel and summer football, there’s something of a gulf, but that’s not unexpected at all. It was, however, the theme of Arsene Wenger’s post match comments as he explained the performance:

I’m not especially concerned. It’s part of the pre-season and it just is a good warning for us that we are not completely ready physically. The positives are that we had to dig deep for some players to play and that we got no injuries.

With a full week of training ahead of the Community Shield, and a further week after that, things should improve on the fitness front, but it’s an issue that might make the opening month of the season a little more challenging. I realise the days of the players coming back from their summer holidays looking like they’d eaten all the cakes and drunk all the beer are a thing of the past, but getting match fit still takes some work after their downtime.

It’s why I’d still be concerned at the idea of Per Mertesacker playing in the first game against Palace. It seems more and more a potential selection based on our need for him, rather than it being the ideal way to bring him back into the team. Regardless of how fit he is and how well he looks after himself, it would surely be better for him to go through some kind of pre-season fitness regime.

It was interesting to see new man Shad Forsythe (Arseblog News article on him if you haven’t seen it) playing a role in the warm-up yesterday. From what I hear he now has total control over that side of things with the previous man completely and utterly under his direction. I think that’s normal when you bring in someone of his stature, and no doubt he’ll have a big role to play in getting these players ready for the new season and to ensure their fitness is managed throughout.

It’s why I don’t really understand criticism of players and the overall performance in these kind of games when it’s obvious there’s an underlying issue. The manager gave Giroud 45 minutes, then played Sanchez down the middle for a period of the second half. Friendlies are a way for him to try various things out to see how they work, but in the end Monaco were better prepared physically and I think that showed.

Even still, we should have had a penalty when Chuba Akpom (who looks faster than I thought) was chopped down miles inside the box. Martin Atkinson immediately gave a penalty then changed his mind on the erroneous advice of his linesman. Hopefully he’ll make that up to us during the season because he got that one very wrong indeed.

He can play as well central midfield because he’s got good technique, good mobility and is a great distance runner. He was educated as a centre defensive midfielder. Then he played in the under-19 with England, he played central defender, he played for Southampton right back.

So it’s still a bit up in the air with him, but that the manager’s thinking of it is clear. I looked at some of the training pictures the other day, and Chambers is in discussion with Mikel Arteta who is clearly guiding him on something. Maybe he was just showing him where the toilets were, maybe I’ve got 2+2 and come up with 5, but maybe this is why we’re continually linked to a midfielder like Khedira.

He’s certainly not a DM in the traditional mould, so his potential arrival might be to offset a departure elsewhere rather than because the manager thinks he can reshape his game like he did Arteta’s.

Meanwhile, some of the Catalan papers (using the Mirror as a source on top of their own information about Barcelona’s transfer targets), are talking about Thomas Vermaelen and a fee of €12.5m. It’s a move that would make a lot of sense for all concerned, what with Barcelona having no defenders and the Belgian getting to live and play football somewhere really nice, but more and more it looks like his departure is just a matter of time.

Final thought for the day, Ignasi Miquel got a run out second half, he looked quite good I thought, and a threat from our set-pieces. Worth a punt as our fourth choice centre-half as long as we bring in a Vermaelen replacement?

Bank Holiday here, so have a good day. Back tomorrow.

Wenger on the £200m, Szczesny’s loan, Flamini, and more goals from within