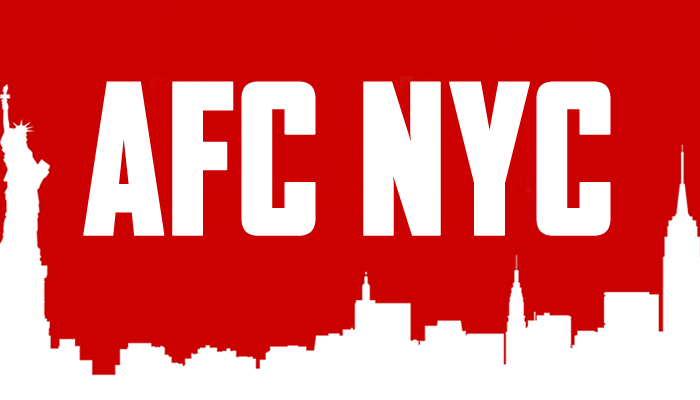 It’s very quiet today, as the full effect of pre-season takes hold. The preparations are well and truly underway for New York, with Arsene Wenger talking about the upcoming trip:

I can tell you something I’m completely convinced of – before people didn’t know who you were, but now every American guy I met knows Arsenal, knows England and knows the Premier League.

The enthusiasm about soccer in the States is new but big. I expect us to have a good crowd there.

A few weeks back, when we put the new book on sale, I was emailed by an American guy on holiday here with his girlfriend who asked if he could come to my house to collect a book. When he arrived we got chatting and it turns out he’s from Houston, Texas.

He said a few years back there were five or six of them who used to meet in a bar to watch Arsenal games. Now, there are a couple of hundred for each game. And that’s in Texas. Talk about an explosion. Being in New York last season was a genuine eye-opener in terms of how big Arsenal are becoming in the USA and it’s brilliant to see it.

That video that went around after the FA Cup final of people going mental when we scored our goals against Hull was just amazing. The locations may change, the reaction of the fans is more or less the same the world over. When I had that trip to LA all those years back (Ole Ole!), there was a pub full of Arsenal fans at midday to watch a Champions League game. It’s different, but the same really.

I’m actually surprised it’s taken us so long to make a pre-season journey to America. I read an article recently which said that, partly because of far-eastern jaunts in the last few years, we’re the most widely supported Premier League club in China now, but with an American majority shareholder and an already established fanbase in the states, we’ve taken our time to make this particular trip.

While I’m not especially convinced by the New York accents, I think it’s going to be a great trip for the players and to play against Thierry Henry and the Red Bulls certainly adds real colour to things. And for those going, there’s a whole slew of events taking place between player signings, a very cool art exhibition, a 5-a-side tournament on the Sunday (not bringing my boots, sorry!), and of course, the book launch we’re holding in O’Hanlon’s on 14th St – the epicentre of Goonerdom on the Friday night.

For all the details on that see this post or the event on the Arsenal NYC Facebook page. Really looking forward to meeting loads of fans out there, and it does seem there’s a good crowd heading over from this side of the Atlantic too. Kinda ironic I might meet some European based people out there for the first time, but if that’s not a great indication of how football can bring us together in weird ways, I don’t know what is.

From an actual Arsenal point of view there’s not a lot going on. Obviously the manager’s transfer stuff had people chatting yesterday about the decision not to sign another forward, but I do wonder if there might be a surprise or two before this season begins.

For a start, Arsene says there’s still stuff going on:

I’m very happy with what I could do until now. It’s not over – there’s still a long way to go. We are still out there to strengthen our squad.

Secondly, it’s very hard to be definitive about certain players and positions. For example, Yaya Sanogo and Joel Campbell are two young players who could, all going well, step up and make an impact in the season ahead. At the same time, it wouldn’t be a shock if one, or both, of them was loaned out. Would that then make room for a more established signing at the top end of the pitch?

The boss was keen to play up his options in midfield, yet at the same time there was definitely something going on with Sami Khedira, which suggests he’s not averse to adding a player there should the right one become available without looking for wages which aren’t necessarily commensurate with his injury record.

As James and I discussed on the Arsecast Extra, it’s hard to see him sign the DM everyone wants without it impacting on the careers of Arteta and Flamini. It would demand a certain ruthlessness on behalf of the manager, but it’s not beyond the realms of possibility either. Perhaps the difference between having a squad which can win the title and one that can’t is making those difficult decisions, where the competition for places is placed above doing the ‘right thing’ by a loyal player.

Regardless of how much you like an individual, shouldn’t you always look to improve if it will make the team/squad better? Maybe it doesn’t quite work like that, it robs the decision making process of the human element, but if a significant upgrade became available we should go for it and worry about people’s feelings afterwards. Players know fine well it’s part and parcel of how football works.  Anyway, we’ll see what happens. I’m still chilled out about the whole thing.

Right, if you haven’t listened to this week’s Arsecast Extra, you can get it right here. I’ll be here tomorrow with a very early blog and after that Tom will be here to provide your daily dose. Right Tom?

I’m sure he knows.