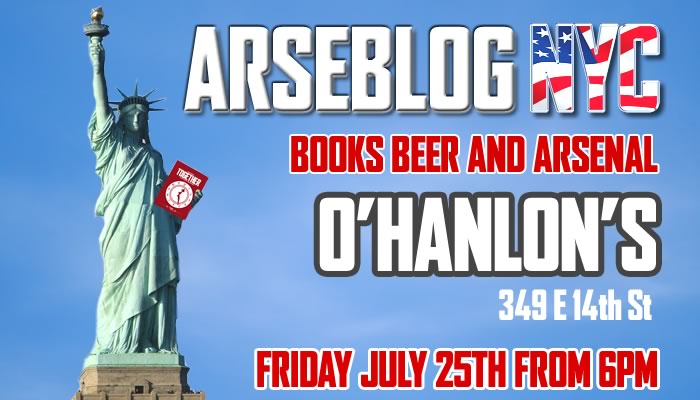 I know I’ve mentioned it here and there over the last week or so, but here’s the official, rather exciting news, that I’m going to be in New York the week of the Arsenal v New York Red Bulls game.

With huge thanks to the lads at @ArsenalNYC, we’re going to be having an event for the new book – Together: the story of Arsenal’s unbeaten season (details of the book here).

Me and Mrs Blogs will be in O’Hanlon’s, 349 E 14th St on Friday the 25th of July with copies of the hardback for sale. Each book comes with the packet of illustrated postcards, and for our American chums only, a very special button badge which features the clock face logo from the front cover of the book. We might even have some limited edition posters too.

We’ll be there from 6pm on Friday so pop down any time you like, and we’ll stay as long as necessary. We’re really looking forward to it, saying hi to lots of American Arsenal fans and soaking up the atmosphere which is going to be great. There’s a Facebook event here if you want to let us know you’re coming that’d be great (but not compulsory).

It promises to be a fun night on 14th street too, with all kinds of other cool Arsenal related goings on, including an art exhibition, giveaways, videos and, most importantly, loads of Gooners getting together over some cold ones before watching the FA Cup winners (we won the cup, by the way) play Thierry Henry’s team the following day. The venues in question are the Blind Pig, O’Hanlon’s and The Winslow.

You’ll get loads more info about what’s going on and when on the Arsenal NYC Facebook page, and Arsenal America are putting together some good stuff too, including a 5-a-side tournament, so check out their site for more info on that.

If you’ve got any questions, feel free to get in touch via the contact form or shout at me on Twitter – @arseblog

Just a reminder, for everyone else the book is still available to purchase via the Arseblog Shop and as an ebook from iTunes – Google Play – Amazon.co.uk – Amazon.com – Kobo

So, there you go. See some of you there for books, beer, Arsenal (and late night pizza slices … goddam!)

On World Book Day, get an Arseblog (e)book

I am still laughing at Diego Costa