Sometimes a 0-0 draw can be a great thing. A riveting encounter, a tactical masterclass from one or both teams, a one-sided affair in which a goalkeeper makes the difference for one side, or a game when both teams are trying hard to win it but just can’t find the breakthrough.

Last night’s 0-0 between Argentina and Holland was not one of those. It was a match both sides were intent on not losing and as such it was one of the most tedious games of the World Cup thus far. It had all the excitement of a funeral. In fact, here are seven things that are more interesting and exciting than the game we saw last night.

I’ll tell you what, I bet Holland wish they’d tried to win it in normal time when they made a bollix of their penalties. Ron Vlaar was probably their best player all night and for some reason he was sent up first. Perhaps he fancied it and wanted to go first, but you’d have thought they’d get one of their more regular, reliable takers to go. His penalty was bad, boringly bad, and after that Argentina had the upper hand.

Messi scored, Robben countered, Garay smashed his penalty into the roof of the net like a goddam boss (possibly the most exciting thing that happened in the 120 mins + penalties), before Wesley Sneijder missed his and after that there was just no way back for the Dutch.

It seemed an unambitious end to the tournament for a team which has plenty of attacking options, but Louis van Gaal’s tactical approach was obvious from the off, as we can see from this picture (via @7amkickoff): 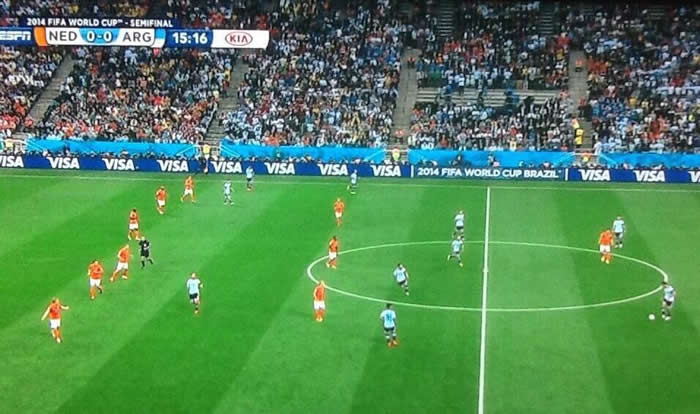 Your classic one bank of six, a tranche of three with a skunk up front there. Exciting times ahead for Manchester United fans, and the rest of us, next season. For me, the highlight of the game was this Tweet. Try it, it’s uncanny.

See?! Anyway, it sets up a final between Germany and Argentina and you have to have the Germans as clear favourites. When Messi doesn’t do it, the Argentinians look almost toothless, and he looked a long, long way from his best last night. Whether he’s carrying a knock, or he’s just knackered after the relentlessness of a long season, I don’t know, but unless he can find some zip ahead of Sunday, I wouldn’t give them much chance.

Germany are so good and so confident that even if they find the opposition digging in and trying to see out the game to a penalty shoot-out, they won’t be drawn into a war of attrition like last night. They’ll find a way through. It would be good, however, if this tournament got the final it deserved. It has been brilliant for the most part, and one final flourish would be fantastic.

Before that is a third/fourth place play-off game which really should be scrapped due to the utter pointlessness of it. Nobody cares who finishes third or fourth. Not the fans, not the players, not anyone in the entire world. It seems almost cruel to make Brazil play again after what happened on Tuesday and while it’s a chance to give a game to players who, perhaps, haven’t featured much, it’s still a steaming load of old, leathery bollocks.

From an Arsenal point of view there’s not a lot happening this morning. There have been no announcements about anything just yet (see point 5 above), but tonight there’s the ‘official’ launch of the new kit. Of course everyone has seen it already. It seems Puma are to keeping things secret what Sp*rs are to spending £100m in the transfer market, but it seems logical that any new arrivals would be decked out in the new gear.

I’m not suggesting that Puma have some control or influence over our transfer activity, but this close to the launch it makes sense for all concerned to delay any news until they can officially show new players doing keepy-ups with the cannon and a leaping cat on their chests.

That event takes place in London tonight and we’ll have a special correspondent there as well as live coverage, a ticker, news bulletins, individual telegrams for anyone who wants them, a video blog, and loads more*.

The only other vaguely interesting piece of news is that Kieran Gibbs looks like he’s taken the number 3 shirt for next season, which is good and proper and right. That’s a left back’s number and with the departure of Bacary Sagna it’s now free for him, leaving the other proper fullback number for Mathieu Twobuchy.

Finally for today, if you fancy winning a rather nifty sculpture of the Highbury facade, check out our competition here with thanks to Chisel and Mouse.