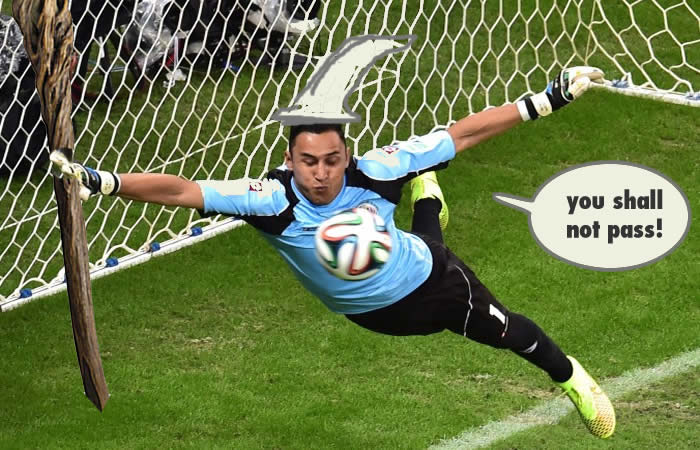 First off, Costa Rica deserve huge credit for their display last night and for the tournament they’ve had overall. Topping a group with England, Uruguay and Italy really was a fantastic achievement and to reach the quarter-finals was amazing.

On paper, there was a definite gulf in quality last night but they were so well organised and worked so hard that it wasn’t until the tiredness crept in later in proceedings that they got exposed a bit. Yet when they did, they had their central defenders playing brilliantly and goalkeeper Keylon Navas doing what he’s done all tournament with a string of saves. His nickname should be Gandalf so committed is he to not letting anything past him.

The Dutch tactic of ‘Give it to Robben’ and let him make something happen didn’t really work at all and their most dangerous moments came from set-pieces. Sneijder hit the post, the skunk caused a scramble and saw a goal-bound effort cleared off the line and onto the bar, and a late effort from distance, again by Sneijder, also cannoned back off the bar.

That said, I thought Costa Rica were quite unlucky. Joel Campbell was clearly barged in the back by Martins Indi (his big brother signed to a major label), while right at the end there was a clear foul by Ron Vlaar in the area but due to Costa Rican player not being able to make the slightest contact look as if he’s been sniped right in the hoop the referee ignored it.

Extra-time was amazing fun, both teams had chances to score, before it went to penalties. Tim Krul came on for Cillessen just before the end, and van Gaal will get wanked over for his decision as the keeper made two saves. However, if he’s such a genius how come he couldn’t do anything to break down a tiny footballing nation in regulation time?

And apart from that I refuse to give Krul any credit whatsoever because they were poor penalties, not great saves. I say this because his antics after he came on were ridiculous. I’m all for winning, and I know there’s a psychological aspect to penalties with the keeper trying to make it difficult for the taker, but the way he was in the faces of the Costa Rica players was grotty and made me want to kick him square in the nuts while wearing a pair of steel capped boots. If he wanted to make his mark on the World Cup he’s done that in ten minutes: not with his saves, but by acting like a complete wanker.

I have to say I find this Holland side impossible to like. And it’s weird because my earliest football memory was being heartbroken when they lost the 1978 final to Argentina. I’ve had a soft spot for them ever since; as a neutral they’ve been my go-to team in every World Cup and European Championships.

With Bergkamp and Overmars and other more recent Arsenal involvement, I’ve always wanted them to do well. But this team, with the Robben/Robin Axis of Evil, the Manchester United manager in charge, and hyper-twats like Tim Krul coming on and acting like that, they’re not doing it for me. Not that any Dutch fans will care of course, and nor should they, but still.

It was a disappointing night for Joel Campbell. He had a couple of nice touches here and there, but looked like the game was beyond him from early on. He started on the right but his defensive effort didn’t match the requirements of the coach and he was switched to the middle. He was taken off on 65 minutes looking unhappy at the decision but I don’t think he can have any complaints.

As his agent yesterday warned off the kind of bottom-feeding vultures that exist in the game and confirmed he’d be heading for Arsenal this pre-season, I have to say I remain unconvinced that he’s quite as good as everyone seems to think. If and when we see him play for us regularly we’ll be much better placed to make a judgement about him, but right now he looks like someone who adds some depth to squad but with everyone fit doesn’t improve the first team at all.

In the other game Argentina beat Belgium with a great finish from Gonzalo Higuain.

As for Arsenal news, the Debuchy/Sanchez stuff is taking on a life of its own, with the BBC reporting our interest in both. I don’t think anyone has any worries about the Newcastle man joining or not, if that deal doesn’t work out we can always find another right-back somewhere, but the idea of the Chilean coming to London is a genuinely exciting one.

I remember some weeks back James and I discussed him on the Arsecast Extra as the kind of forward we should be looking at this summer, and it seems there’s definitely something going on here. How quickly it might happen, I just don’t know. The amount of information and misinformation that surrounds these kind of deals is ridiculous.

Each story is valuable to the papers and press, so every twist and turn will be reported regardless of veracity (btw, how disappointing to see the Guardian reference the fake Debuchy Instagram account yesterday), and I think this is one that will drive people mad until the point it happens. Or doesn’t. I’m optimistic and hopeful but there’s a definite whiff of the Higuain off it so until such time as its done and dusted, and I’m maintaining some distance.

I am a bit excited though, coz he’s ace.

Right, that’s that for this Sunday. Time to walk the dog then go foraging for breakfast. Catch you tomorrow.