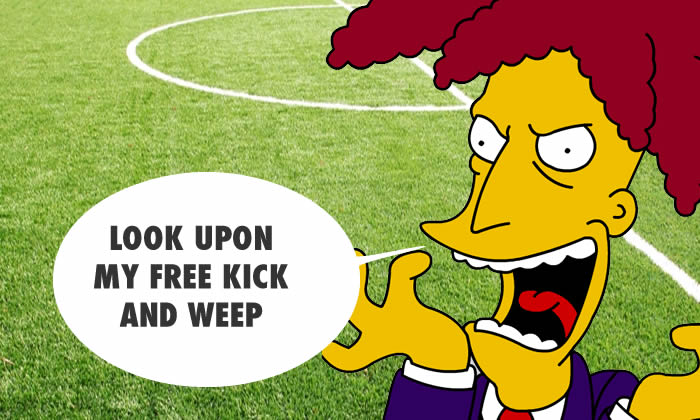 Morning all, a quick round-up for you this Saturday morning. So, we know the first two semi-finalists and it’s Germany v Brazil.

No real surprise, as both were probably favourites in their fixtures, but neither side was particularly convincing. Germany, without Per Mertesacker (who was suffering a bit with illness apparently), went ahead with a cracking Mats Hummels header in the first half. A real centre-half’s goal too. The ball in was excellent but the way he held off Varane was men against boys stuff, and the quality of the header – which went in off the underside of the bar – left Lloris grasping thin air (something he’s quite used to on a weekly basis, in fairness).

France really had no answer. They looked pedestrian and one-paced, apart from the occasional burst by Antoine Griezeman. It was fairly noticeable that the Germans looked to take him out as early as possible and not let him get anywhere near their final third. Both Khedira and Schweinsteiger picked up bookings for it, but he really was the only France player who looked like making anything happen.

When your team is looking for Valbuena – a kind of knock off, sweat shop version of Cazorla whose stickers are put on wrong and whose eyes are too close together – to create something against a team as good as Germany then you know you’re in trouble. Laurent Koscielny got a run out, replacing the hapless Sakho. They brought on Loic Remy who seemed to play a double-pivot right back with Debuchy, and eventually brought on Olivier Giroud but nothing really worked.

Indeed, they should have been dead and buried when Mesut Ozil created a fantastic chance for Mueller. His air kick was pitiful and Schurrle, on the follow up, could only fire the ball straight at Lloris who saved with his legs. A late chance for Benzema, created by one of Giroud’s deft flicks, was so easily dealt with by Neuer it was like a giant holding off a midget as he swung pointless air punches.

Maybe it was the heat and the time of day that made for such lacklustre fare but I think it just came down to the fact that France didn’t have enough quality to trouble the Germans who dealt with everything pretty comfortably. Now though, a rest for Koscielny, Giroud and yer man Debuchy who L’Equipe say is joining us in a €10m deal, soon to be confirmed.

Then it was the hosts against Colombia and after the relatively tedious game that preceded it, the first half was tremendous fun. Brazil took the lead via Thiago Silva, who bundled the ball in from a corner after some terrible marking at the back post from Sanchez. Whatever about letting the man go, if he’d been switched on he could have just defended the ball itself and got rid of it before it ever reached the Brazilian captain.

Colombia’s response was great, James Rodriguez again showing his stuff with some mazy runs, but at half-time it remained 1-0 and I was looking forward to more of the same in the second half. Instead, what we got was match of fouls during which football threatened to break out from time to time. None of them were particularly nasty or dangerous, it was just the sheer amount of them. Every contact resulted in a fall, every fall in a free kick, and the referee seemed disinclined to punish either side with a card.

When he did get his cards out, it was for Silva who blocked off the goalkeeper as he was kicking the ball from his hands (looked a bit accidental/innocuous to me), and he got a booking which will keep him out of the semi-final which is bad news for Brazil. Colombia rather unluckily had a Yepes goal ruled out for offside (as an aside: how brilliant has he been?! 38 years old and one of the defenders of the tournament).

Rodriguez got a booking for a foul which resulted in the goal that made it 2-0, and despite the fact he’s a ridiculous, woolly headed gimp, you have to say Luiz’s free kick was brilliant. Maybe the keeper’s position could be questioned, but maybe he was hampered by injury as he had a central defender taking his goal kicks last night. That was fun to see, like playing school football again where the keeper is just the crappest footballer and whose attempts to take those kicks himself always end up with him scuffing the ball into midfield straight to the opposition.

Again Colombia came back and won a penalty for which Julio Cesar was lucky to only get a yellow. Rodriguez stepped up and slotted home but in the end they couldn’t find another. The injury to Neymar late on is another big blow for Brazil. Despite the fact he was outshone by his Colombian counter-part, he remains the most exciting and unpredictable component of that team. Watching the likes of Hulk and Fred struggle to do anything remotely constructive in every game of this tournament really does speak to a dearth of attacking talent in Brazil, and looking for them to make the difference against Germany in the semi-final is a lot to ask.

Some have suggested the referee’s lack of firm hand is what brought about the Neymar injury, and there may be something to that, but that excuses Zuniga from what was a nasty challenge. Borne out of frustration, perhaps, but he went knee first into his spine and that was pretty cowardly, whatever the referee’s contribution to the game.

Today we’ve got Holland v Costa Rica when Arjen Robben will attempt to dazzle us all with his pace, skill and diving while Joel Campbell remains the one Arsenal fans will have their eyes on. Can he spark back into life in this tournament, especially after a gruelling 120 minutes in the last game?