Tactics Column: Arsenal fail to press on against Southampton

Amazingly, it was on 65 minutes when Arsenal first went to close down Artur Boruc. The Southampton goalkeeper produced a moment to forget the last time the two sides met – a 2-0 home win for Arsenal – but this time, although he conceded two goals again, it was a relatively less taxing evening for Boruc.

There were a combination of factors that meant Arsenal pressured the goalkeeper far less in this 2-2 draw. Southampton, particularly in the first-half, kept the ball magnificently and as such, moments where they were put on the back-foot were few and far between. They also pressed Arsenal high up the pitch whenever they lost the ball, similarly suffocating Arsenal in their own half. But The Gunners were inexplicably more passive in the defensive phase than they were in the same fixture earlier in the season, and that also allowed Southampton to have the ball. This strategy, however, is nothing new – we have seen it often from Arsenal in the last few months.

They have altered the intensity of their press, now more willing to drop back and soak up pressure for large periods of the game if need be, to set-up a second-half flourish. Arsenal did that, although conceding early to a Jose Fonte header will not have been part of the plan. They scored two goals straight after the break, Olivier Giroud pirouetting and back-heeling from a low Bacary Sagna cross, then Santi Cazorla driving superbly from the edge of the area. Arsenal were penned back not long after when Adam Lallana equalised, but there was no doubt tempo needed to be increased after the break and thankfully, that happened.

However, it was a bit of a surprise Arsenal weren’t able to build on their good work (credit must go to Mauricio Pochetinno for much of this. By the way, how refreshing is it to see a side as well drilled as Southampton not among the established elite?) considering the way they have ended second-halves this season. 66% of Arsenal’s goals have come in the 2nd half, with 22 out of their 45 goals coming after the 60th minute mark.

Kristian Jack, writer for TSN, actually identifies the 45-75 minute mark as Arsenal’s most fruitful period, and he tweeted after the match that it was this period, if not the final result, that Arsenal won again. Jack also highlights that Arsenal rarely fall behind this season, and that helps because it takes “the panic away that often came into their game when things didn’t go their way [last season]”. Now, only 10 per cent of total minutes, as opposed to 18 per cent last season, are spent chasing games.

What this team has become fantastic at is managing moments, setting themselves up for a win in the latter stages when the opponent tires – and Southampton did begin to tire until Mathieu Flamini’s red card. It’s easy to make Flamini the villain of the piece but his sending-off on 80 minutes came when Arsenal began taking the ascendancy a bit, not necessarily in the scoreline and shots, but pushing up the pitch and marking more tightly. The one great opportunity that came their way to score the winning goal came during this period when Mikel Arteta stepped forward and won the ball in Southampton’s final third, and then fed Nacho Monreal., His shot, however, was skewed waywardly wide. 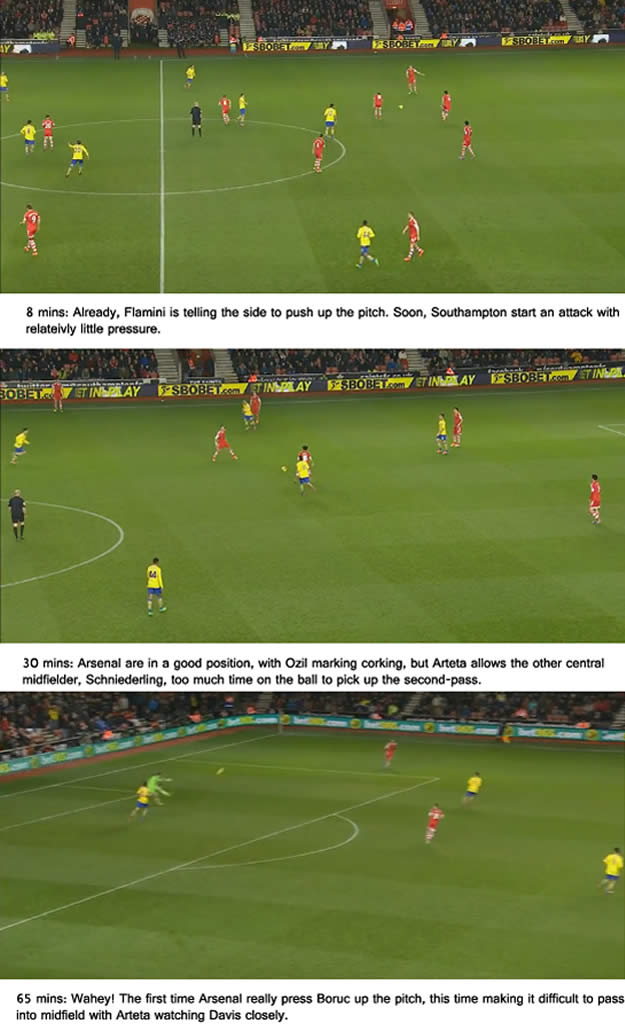 The inclusion of Flamini and Arteta together in central midfield was a major bone of contention amongst Arsenal fans. In truth, Wenger was left little choice with Aaron Ramsey and Jack Wilshere both out with injury. That meant Arsenal’s strategy had to be altered a little bit as normally, one of and Ramsey would push up and press the deepest midfielder. Instead Flamini, playing that role, often dropped off as his nature inclines him to, and Southampton’s deep-lying playmaker, Jack Cork had lots of time on the ball. Later Arsenal tried to unsettle Southampton higher up the pitch but Flamini’s red card never allowed the late surge at Saints’ goal.

The other debatable pick was Serge Gnabry ahead of Lukas Podolski who mostly stood out for his Bambi impressions, slipping on the wet surface and leaving further impression that he’s still a work in progress and not someone to pin your hopes on just yet. Wenger might have left Podolski out for the defensive contribution that Gnabry gives because Southampton push their full-backs right up the pitch, although Wenger’s concern is not with Podolski’s work-rate per se, it’s how quickly it drops later in the game.

More pertinently, Wenger probably just wanted to select a settled squad and just keep the Cazorla/Monreal combination (and to a lesser extent, Sagna/Gnabry) that has been burgeoning in recent matches. As such, he would have been unwilling to play Podolski on the right flank. But Podolski is good for Arsenal not only because he’s a lethal finisher, but because he keeps the ball well and as Wenger says, “occupies the left-flank”, meaning Arsenal can still have a player who stretches the play as well as being involved in the build up.

As it was, Arsenal suffered in the first-half, but came to life intermittently in the second-half but it feels like they’re dealing in the adequate offensively. Ordinarily, “adequate” is enough especially if the back four defends as well as they have, but there’s still the dormant feeling that the team needs something more from the midfield, both in pressing more tightly and finding combinations more frequently.

Previous articleSouthampton 2-2 Arsenal: a stumble, not a fall
Next articleArsenal’s lonely man