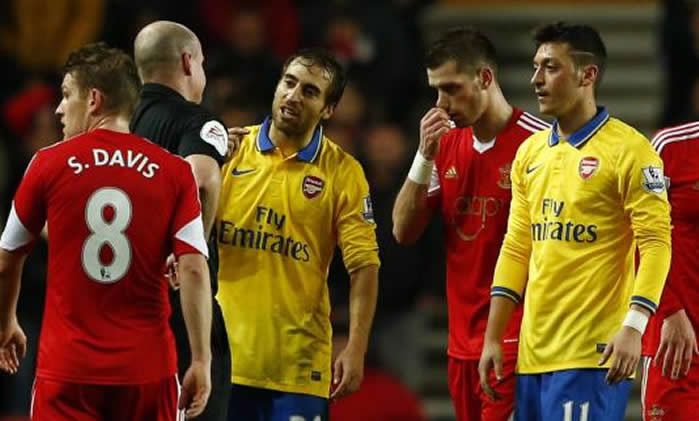 I’ll admit that I’m working off a post-game viewing of this one, which I suspect skews the perspective a little bit. As I was making my way home I was following the live blog, it was 2-2 and then Flamini got sent off.

I caught the last 15 minutes or so live, and down to 10 men, away from home, against a good side who played well on a night when we really didn’t perform at all, well, it seemed like a decent point to me. Under the circumstances.

The reaction afterwards seemed gloriously over the top, even if I’m well prepared for almost everything the Internet has to offer in terms of opinion. ‘Season over’, ‘We’re done’, ‘Time to concentrate on 4th’, and many more besides were some of the immediate post-final whistle nuggets.

I mean, I get we played poorly, and that expectations were high because of the seven consecutive wins (including 5 clean sheets) that preceded this game, but come on. Man City came to St Marys last month and went home with a 1-1 draw. We weren’t playing relegation fodder who could barely scrape a team together. We knew we were facing a good side with dangerous players and so it proved.

None of which means we can’t look at ourselves and analyse what went wrong, but you just can’t win them all and this is a game, considering the level of our performance, which we could easily have lost. We got a draw, we can take stock and regroup ahead of our next game, but let’s not throw the baby out with the bathwater here.

Our first half was bad but even still I think they got a bit lucky with their goal. For a start, it was a great tackle by Mertesacker, not a foul. Then Monreal was fouled at the back post, and I suspect Wojciech Szczesny will feel unhappy at being beaten at his near post like that. They should have doubled that lead when a Monreal clearance deflected into the path of 18 year old Sam Gallagher, but he skewed his shot wide. A real let off.

There were signs at the end of the first period that we were coming back into it, Boruc making a save from Koscielny, and early in the second half two relatively quick fire goals put us ahead. First Giroud deftly flicked a low Sagna cross after great work from the right-back to win the ball back, then Mesut Ozil set up Santi Cazorla on the edge of the box and his left footed effort spun past the keeper to make it 2-1.

A fine response, you have to say, but straight away they were level. And it was a poor goal to concede. A long ball was allowed to bounce, Rodriguez held off Sagna and played it back to Lallana who, with no Arsenal midfielder tracking his run properly, had all the space in the world to finish under Szczesny. Schoolboy stuff really, but how long has it been since our defence was caught out like that?

Ozil grew into the game, a fantastic run and deflected shot saw the ball bounce back off the crossbar and Monreal really ought to have hit the target after being set up well by Arteta. He also had a ball into Giroud, but in that position he has to shoot and he has to work the goalkeeper at the very least.

The search for a winner was then hampered by Mathieu Flamini’s red card, and it’s one about which we can have no complaints. Although he won the ball he jumped in with two feet and you just cannot do that. He knows it, he’s been around the block long enough to understand that’s a red card all day long, and any frustration he has at the referee’s decision ought to turned inward.

Normally that’s a three game ban, but the suggestion this morning is that it will be 4 because he’s already served a one match suspension this season for 5 yellow cards. I have to admit I’m not 100% sure about this, I thought extra games were only added if it was a second red card of the season, which it’s not. I don’t remember this happening before, but we’ll look into it and see what we can find.

It gave some impetus back to Southampton, Szczesny had to make a couple of very good saves to keep the scores level, but even with 6 minutes of injury time they couldn’t find the goal that would have made it a very bad night indeed.

I don’t complain on the quality of our game in the first half – it was not good enough. We had some problems to get into the pace of the game, in the second half it was much better but after when he had to push on for the third goal we were down to 10 men so we had a least to go home with a point.

And as I mentioned above, all things considered it’s not a bad point. Of course we’d have liked to win the game, but that’s football. You just don’t win them all, and when you don’t win, you have to make sure you don’t lose. If we talk about the growing maturity of this team perhaps that’s a sign of it there. We’re not top of the table by accident, a draw against Southampton is not evidence of an imminent collapse, and we have responded well to setbacks this season.

I genuinely can’t understand the extreme nature of some of the reaction, as if all that’s come before last night has been an inconvenience. Like it’s something that’s got in the way of complaining and bitching, but the team now have to respond because the fixture list becomes extremely unforgiving after this weekend.

It’s a job made more difficult by the suspension of Flamini, what looked like an injury to Cazorla towards the end of the game, and the news of an Aaron Ramsey injury setback. Although the manager was keen to play it down in the immediate aftermath of the game, news was circulating beforehand that he could miss up to 6 weeks with the knock picked up in training.

With Jack Wilshere also sidelined, hopefully not for too long, it’s a double blow for a team heading into a crucial and difficult period. It will, undoubtedly, increase the pressure on the club to spend some money this January, and Wenger, when pressed by TV afterwards, said something about how he’d hope to have some good news before the end of the window.

So, we’ve stumbled a little bit, but we’re hardly lying face first in the dirt. We’ve got a good chance to get ourselves ‘back on track’, if you like, with a Sunday game at the Emirates against Crystal Palace and, if we can find the right player in the January window, we might just have a very welcome boost as we head into the business end of the season.