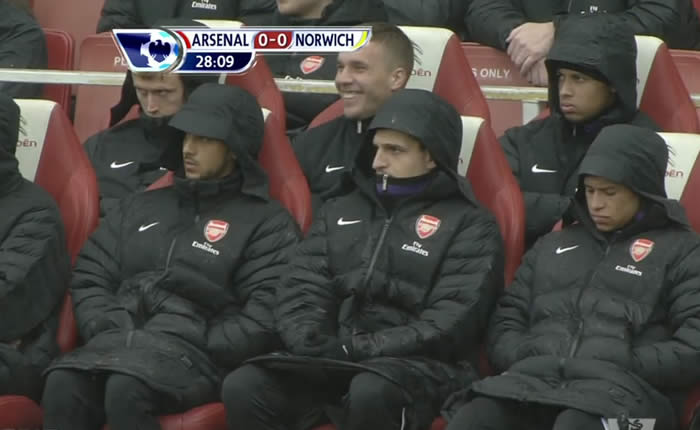 As we don’t play until tomorrow, a quick Saturday round-up for you.

The injury news ahead of tomorrow is that there’s no real news. Bacary Sagna remains out and will miss Everton and the trip to Napoli, but may be in contention for the Man City game. It means that Carl Jenkinson is likely to continue at right back.

If Hull weren’t exactly a challenge then this week is going to prove a lot more testing for the young man. To be fair to him, when he arrived nobody thought he was ready, then with a run of games he proved himself quite capable indeed. Some of the shortcomings in his game were exposed more recently, but maybe, and I know this is an outrageous thought, he and the coaching staff have been working on them since.

The one thing you won’t ever get from him is a lack of willingness to work hard and do his best, and if he can focus on the areas he needs to improve on, particularly in the air, then there’s no reason why his game can’t take another jump forward. His delivery for Bendtner’s goal the other night was fantastic, so he’s definitely got something to offer at the other end too.

Meanwhile, as Arsenal’s players did a lot of stuff for charity yesterday, including donating a day’s wages, Mesut Ozil told the press he’s not burdened at all by his £42.5m price tag, saying he doesn’t feel pressure at all:

I have played for Real Madrid, which is such a big club and where the pressure is so huge because you have to go and, really, win absolutely every game. There is no game where people don’t expect you to win. So, having played there for three years, pressure is nothing that would scare me. That’s why I don’t really feel the pressure.

And when asked about whether Arsenal can win the league he, quite rightly, played it down, saying it was too early to comment on such things. In fact, he went as far as to say we’ve got to do more in order to achieve success this season, and that’s something I really like to hear:

That caveat is really interesting. ‘We have to develop further’. Whether that means adding to the squad, or for other members of the team to start contributing I don’t know, but either way there’s no argument from me. It’s also been a feature of what Arsene Wenger has said to the press. While some pundits to say we have no chance of winning the league simply because that’s the easy, dare I say lazy, way to think because of what’s come before, I think we do have a chance.

But there’s also a danger of getting carried away with ourselves. It’s only December, the gap over other teams might be big, but over Chelsea it’s just 4 points, and that’s the one we have to be most mindful of. I do believe there’s a real professionalism and maturity in this team, but until we actually go the distance there are always going to be doubts.

Anwyay, as Ozil says, ‘We are definitely on a good path’, and at this point of the season, that’s as much as you can ask.

Lukas Podolski is back in full training now, full of joy and happiness. He and Cazorla must have training ground Grin-Offs. When you look at the team now it’s hard to see exactly where he fits in, but last season he got 16 goals and 11 assists, and even if he’s not a guaranteed starter he provides exactly the kind of quality and depth that we’ve been crying out for.

In seasons past we’d have given anything to have a ‘squad player’ who could contribute to that level, but I’m also reminded of a piece we ran on Arseblog News a few weeks back. Arsene Wenger urging Podolski to give that bit more, saying he could be ‘world class’ if he did. Maybe the length of time he’s spent out might have given him some perspective on that, and looking at this current team he must know he’s got play really well if he wants to be involved. All in all a very positive situation.

And as a bonus for you, here’s a large version of that header picture above, which really captures the very essence of the man.

Finally, it’s 2 years to the day since we launched So Paddy Got Up in The Tollington. Time flies, eh?! All the hardbacks are gone, but it’s still available in digital and for the bargain price of just £1.99. Check it out on Kindle – iTunes or Kobo.

Right, have yourselves a good Saturday, more here tomorrow including a full preview of the Everton game and live blog coverage of the match itself.