Fine fellow Arsenalists, gentleman and suffragents, menfants and Emirmadams and babaroons, we appear to now be entering a fourth dimension. We are entering the realm of the surreal. Carlos Suarez, El Corporal, trusty reserve starboard battler, has turned into a Roberto Carlos style offensive weapon, with Robin Hood’s eye for a target. Matthew Flame, resplendent with his parrot on his shoulder, has scored for the first time in over one hundred years, as Lord Mangan of Leinster has already pointed out.

Our opponents are in such eye-boggling awe of our rampaging and deadly form of tickety-tackety that they are even paying tribute to us by the names of their players. We played a team on Saturday, the Cardiff Redbreasts, who fielded a player called ‘Thèophile’. Imagine that player’s joy when Theo came on in the 91st minute. And although naming him in the starting line-up against Hull Tigers seemed like a piece of provocative art, Mr. Blackwater, the Camden Cockroach, the non-scoring ninny, the wantaway wally, has scored a goal. Sometimes, scabs have their uses. Mr. Ponsonby, ‘The Demented Bishop’, is just days away from his return after a spot of gout. These are heady days indeed.

Firstly, a short recap of Woolwich v Cardiff Redbreasts. One of the keys to becoming a mature adult individual is to learn to overcome one’s base instincts, one’s atavistic urges. To not give in to the reactionary voice in one’s head telling you to throw a housebrick at that irritating bludger Wayne Rooney or carpet-bomb Tottenham High Road in your private bomber … or indeed to celebrate a goal against one of your former clubs. It is simply not cricket. Only players of the very lowest underclass would be so classless as to rejoice in such an occasion. Which is why Mr. Ramsara’s non-reaction to his goal should NOT be crowed over or celebrated. It is simply the done thing.

The pair of Ramsara specials were a delight, of course, with both gentleman’s favours coming from ‘The Wandsworth Wizard’, Putney’s own divine Melvin Orwell. One of these passes was a bona fide Mesmertron.

And so to The Emirates, for the visit of Hull’s Fighting Tigers, where Mr Ramsara unveiled his famous no-look pass, The Blindfolded Highwayman. He metaphorically mounted his horse, blew a kiss at a fair maiden, strapped a blindfold across his shining forehead, and slipped that pass through like a sword into ice cream. But that was not the most extraordinary event of the evening, for we witnessed something akin to Mr. Halley’s comet; a goal from the aforementioned non-striking striker, our very own midnight mauler, ten tonne tessie, Mr. Blackwater, who found himself on the end of a piece of laser guided starboard ordnance from El Cabo Primero, our Mexican wonder, Carlos Juarez. Wonderful.

Shortly after oranges*, Mr. Orwell made it a duck to an egg, and there it remained. Joyful times, enlivened by a sustaining visit pre-match to Mr. Nando’s Chicken Emporium, where fiercely seasoned fowl was accompanied by a cheeky pale 2013 carbonated hop-based drink. They were out of Pouilly-Fumé, but when a company sends you a gratis card for unlimited food, it would be churlish to not take advantage.

And then let us glance down the table, a long way, down, keep going, a little bit more, there. Yes, it’s Manchester Untied. In a season of transition. A transition from a good team to an average team. If you have been around the game as long as I have, you will know that Newton Heath, like groundwater, will always find its own level.  The last twenty years or so, if the wonderful Mr. Moyes has his way, will be a mere blip, an aberration. After all, Preston North End and Huddersfield Town were once forces to be reckoned with.

And let us not forget our friends Middlesex Rovers, whose spawnsome comeback against Fulham has happily papered over the cracks, allowing our hero Mr. Villas-Boas a few more weeks in charge. Some friends in the intelligence agencies have helped me out this week and I have been able to secure a top-secret email from Mr. Levy to Mr. Villas-Boas, which is here for your enjoyment. I have redacted the most offensive of his language to spare my lady readers’ modesty. 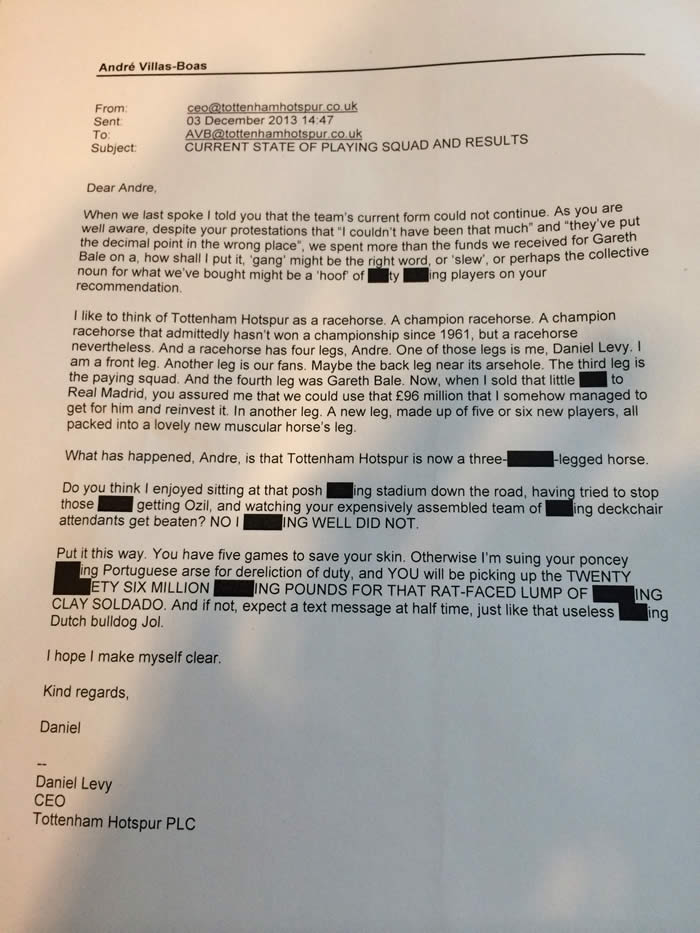