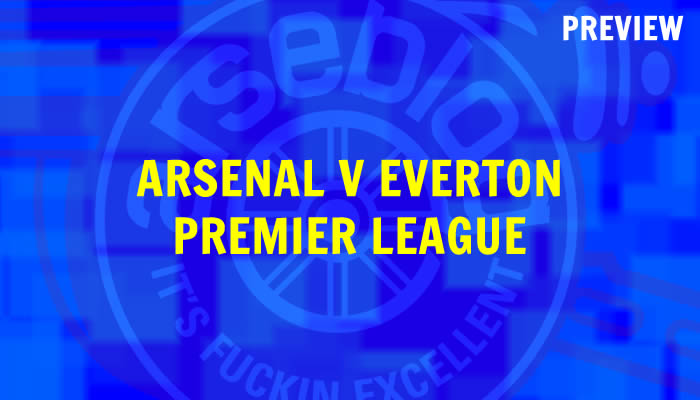 Yesterday’s results provide us with two things today. 1 – margin for error : 2 – the chance to really assert ourselves in the title race. Given how we’ve been playing this season, and looking at the squad and the players in it, I suspect number 1 won’t even enter their minds.

Chelsea’s defeat to Stoke (arf!) means we can go 7 points clear of them with a win over Everton today. Mourinho was in typically transparent form after the game, suggesting they were in trouble because of what happened in Mordor; but while there’s still a long, long way to go in the title race, it does give us a real opportunity to put some distance between us and them.

How the manager decides to set out his team today will be interesting. The physical threat of Lukaku up front and the quick wing play that has been a feature of Everton this season is something we obviously have to be wary of. I know our usual plan is to go play our own game and worry about the opposition afterwards, but that’s not to say we’re not aware of the dangers the opposition can provide.

If he’s properly fit I wouldn’t be surprised to see the Flamini/Arteta double-axis in the centre of midfield, with Ramsey on the right hand side and Cazorla left. People suggest the two of them can’t play together, overlooking the fact our most accomplished performance of the season (Napoli home) came when they both started in midfield. It would also offer that extra shield of protection to the back four without affecting the balance of our attacking game.

A rested Olivier Giroud will come back into the side and with Carl Jenkinson continuing to deputise for the injured Bacary Sagna, I suspect Gibbs will return in place of Monreal. That said, the Spaniard starting wouldn’t worry me in the slightest. He was excellent against Hull in midweek and it’s a fine problem for the manager to have to choose between those two left backs.

The boss says of this one:

This is a team who have a good technical level and have just had a good result against Manchester United. So we know we want to turn up with a huge performance.

Everton are going to be tough to break down. They’ve conceded just 3 goals in their last 6 games, and all of them came in one game, the 3-3 draw in the Merseyside derby. Those games are somewhat anomalous, not really representative of a team’s strengths. We’ve had enough crazy derby days ourselves to know that, and the fact that they’ve kept clean sheets in the other 5 games tells you what we’re up against today.

It’s going to be a real test of our ability and character today. The first – well you look at this team and the talent in it and on its day you’d fancy it against most teams in England, and indeed Europe. We’ve shown we can win big games despite constantly being told we haven’t. We’re about the only side that has made Luis Suarez look anonymous, for example, yet that’s played down because Liverpool’s recent history hasn’t exactly been stellar. Yet look at the league table and the results they’re racking up.

As for the second, well I think there’s plenty of character. We’ve responded well to set-backs this season. Lose to Villa, win 14 in a row. Lose at home to Dortmund, go there and beat them at their place. Lose to United, win 4 in a row as they pick up 2 points from the same number of games. This is not the brittle, delicate Arsenal of before.

But there’s a special kind of pressure when you’re out in front and it’s not somewhere we’ve got great experience of being. I don’t expect us to be anything other than confident and assured today, the maturity of the squad and the leaders we have within in it will ensure that, but it will be interesting to see how we get on knowing there’s just a little bit more at stake today.

Because let’s be honest, a win over this Everton side and being top by 7 points at this stage of the season would really make a statement. I don’t think a draw would be a bad result, but somehow it just feels like things are lining up for us this season and it would rude not to take advantage by taking all 3 points today.

It’s going to be tough, hard-fought and all the other cliches you can think of, but if we play like we know we can then there’s no reason why we can’t win today.

As usual we’ll have full live blog coverage for you this evening. Check back later for a post with all the details, or simply bookmark our default live blog page and updates will begin automatically.

Right, that’s that for now. Back later on for live blogging, in the meantime have a good Sunday.