Right then, something a bit cool for you this afternoon. As you probably know, Dennis Bergkamp has released his autobiography – Stillness and Speed – and we’ve got some copies to give away to you.

As well as 5 unsigned copies of the book, we’ve got one star prize of a signed edition and a signed Arsenal football.

About Stillness and Speed 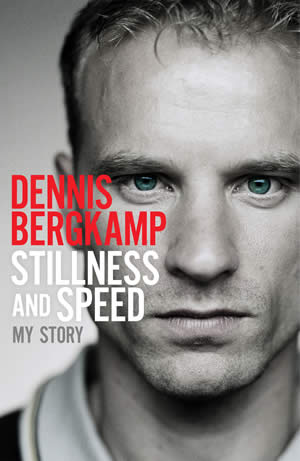 In Stillness and Speed, one of football’s most enigmatic stars finally opens up about his life and career, revealing the things that motivate and inspire him. Viewed by many as one of the most influential figures in Premier League history, and scorer of the goal that Arsenal fans voted the best in the club’s history, Dennis Bergkamp is a true giant of the game.

As a youngster, Bergkamp learned from the Dutch master Johan Cruyff. By the time the pupil was ready to graduate from Ajax and move abroad, he was ready to spread the word, but in Italy he found few willing listeners. It was only when he moved to Arsenal and linked up with Arsene Wenger that he met someone else who shared his vision for football’s possibilities.

Bergkamp became central to everything the club did: now he had become the teacher, their creative genius, and the one who inspired some of the wayward old guard to new heights, helping them to seven major trophies.

Few footballers’ books make you think anew, but in Stillness and Speed Bergkamp presents a new vision for the game and how it might be played. He was a player like no other; his story is told like no other. It is a book that will inspire football fans everywhere, whatever their allegiance.

To enter the competition, simply answer the following question: From which club did Arsenal sign Dennis Bergkamp?

Was it a) AC Milan b) Inter Milan c) Ajax

Answers by Wednesday midnight to [email protected] – winners will be announced on Thursday morning.

Dennis Bergkamp – Stillness and Speed is available in all good bookstores, from Amazon and as eBook from Kindle, iTunes and Kobo

Previous articleRamsey’s form is only a good thing
Next articleTactics column: Decision making