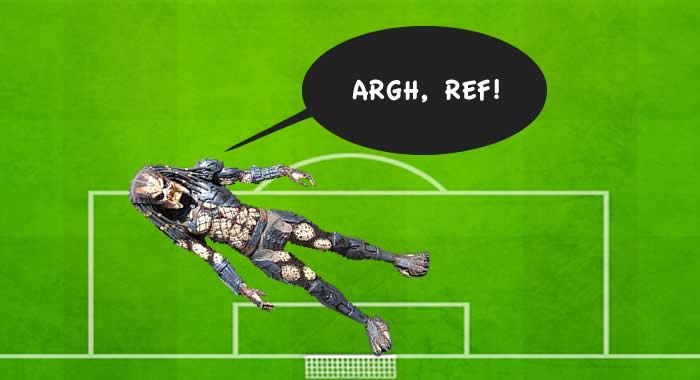 So, we didn’t win the Emirates Cup yesterday.

[Insert oh-so-hilarious remark about how long it’s been since we won a trophy].

Which I kinda almost prefer to actually winning becuase then it would have been:

[Insert oh-so-hilarious remark about how Arsenal have finally won a trophy].

Leading 1-0 against Galatasaray through Theo Walcott’s rather fortunate cross which crept in at the far post, we ended up getting Drogba-ed. He’s like an opposition Casanova (he always scores against us) and while there can be little doubt about the quality of his second goal, his first, via the penalty spot, came about when he Drogba-ed in the area, going down under the slightest contact from Ignasi Miquel.

Perhaps it was a split-second thing, but most likely he knew the cross was coming in, he was facing an inexperienced kid trying to make his way in the game, and decided that if there were any contact at all he’d hit the deck like a ton of bricks. The referee bought it, and we know the rest. For all his quality, he really is one of the most heinous cheats I’ve ever seen.

Time away from English football has not made him somehow likeable to me. He’s not a wily old foe that it’s a pleasure to cross swords with again. He’s a ghastly sham artist, a footballing racketeer and while his antics are no surprise, the fact that an experienced referee fell for them certainly is. Sets the standards for the season ahead, I guess.

I’m not worried about the result either. Ideally you’ll win every game you play but pre-season is about getting sharp, building understandings again, and learning lessons. Chief of which, for me at least, is that the squad is light at the back in terms of bodies and personnel. Per Mertesacker played 2 games in 2 days, Bacary Sagna did more or less the same, and while I like the Frenchman at centre-half, I think he’s our best right back by a good distance and that’s where he should be playing.

At left back the absence of Monreal and Vermaelen meant a run-out for Miquel, and I think it’s kind of obvious why he hardly featured at all last season having played a fair bit the season before. It could be rustiness, but I’d have to admit being slightly fearful of having to use him when the real football begins. Thus far he’s stuck it out during a summer in which we’ve let countless players go, so maybe there’s more to him than a friendly suggests, but all it’s hard not to be concerned about our squad in this area.

These may well have been pre-season strolls, but having to play one of your only two fit centre-halves for 90 minutes two days in a row is asking for trouble. Fatigue brings about injuries. It probably speaks to Per’s fitness and conditioning that it was done at all, but it also highlights just how badly we need a reinforcement back there, in my opinion.

Inevitably asked about transfers, and bringing players in before the Champions League qualifier on August 20th/21st, Arsene said:

Let’s count first on what is here, and if we can add something then we will do. It’s very difficult to predict that that will all be sorted out before we play in the Champions League qualifier. I think we have enough quality to achieve it with the players we have at the moment, if we can bring more in before that it is even better.

Which also suggests it’s difficult to predict any new faces before our opening game of the season, and if you’d suggested that scenario to anyone at the end of last season, they’d have thought you were mad. Only the most sceptical would have envisaged such a thing after the rally-cries issued at length, and more than once, by the club. As I said yesterday, as much fans had a level of expectation about what we might do this summer, the club took up that baton and gleefully ran with it.

That we’re now inside two weeks from the start of the new campaign with nothing done bar Sanogo isn’t where I thought we’d be, that’s for sure. Maybe I’m the foolish one for taking them at their word, but I didn’t think what they said was unreasonable in any way. ‘We have money, we want to spend it’, was the message. After the fright we got in nearly missing out on a top four finish, it’s a bit like your tyre blowing out, sending you spinning to the other side of the road, barely missing an oncoming truck, then driving past a garage and continuing down the road on the flat.

There is no reason, other than brinksmanship, why deals can’t be done between now and this weekend or certainly before the deadline to get players signed and cleared before the Villa game. The Suarez situation is a different thing entirely, it’s a gigantic, cataclysmic drama in which we’ve inserted ourselves, and we now have to deal with the consequences of that. But the requirements we have elsewhere can be addressed and completed if we really have a desire to do that.

It doesn’t matter if people think the market hasn’t moved. We’re really not reliant on that. After what Gazidis said about our spending power and our so-called ambition, how about we move the market? Be proactive, not reactive.

Here’s the reality: we’re about sell Gervinho to Roma for around £7m. We got something like £1.5m for Vito Mannone when we sold him to Sunderland. That means we’re rocking a transfer profit of £8.5m in a summer when we were set to show the world how we’d changed and were ready to spend the money to make us title contenders again.

Note the word ‘contenders’. Nobody’s asking the club to spend the money which will ‘guarantee’ trophies, just use the resources we have to improve our team and make it competitive. I’ve always said I can live with that. If I feel like we’ve done everything we can to try and win, but end up beaten by a better side, then fair enough. But muddling on with the same group of players who scraped fourth last season isn’t ambition. It’s stagnation.

As I also keep saying, I like the players we have, I think the squad is lighter, streamlined and more efficient, but even they know they can’t compete properly this season. They keep talking about need for new faces. For the second or third time Jack Wilshere has commented on it, saying:

New signings and big players always bring confidence. The players get excited when they hear the names being splashed about. We’ll see what the manager does. We trust him and the club. I’m sure there will be some players coming in.

At this point it sounds more like an entreaty than a statement of belief. And while some might tell me there’s still time, of course there is, but what excuse do we make, or how far do we move the goalposts, if the squad we have drops points against Villa, or struggles in the Champions League qualifier?

‘We’ve got until the end of the window to do deals’. Indeed we do, but we’ve had all summer to do deals and shown little or no inclination to complete anything. Do we then re-focus our efforts because results dictate rather than work to make ourselves as good as we can in order to avoid nasty situations like that? It doesn’t speak to a cohesive plan if that’s the case.

We have to get things moving. There is, really, no good reason not to, and a hundred and one reasons why we should we busy this week and next. I don’t want to hear about ‘the market’ or about players who have to be better than the ones we have. That’s the whole point of transfers.

It’s time to sort things out.