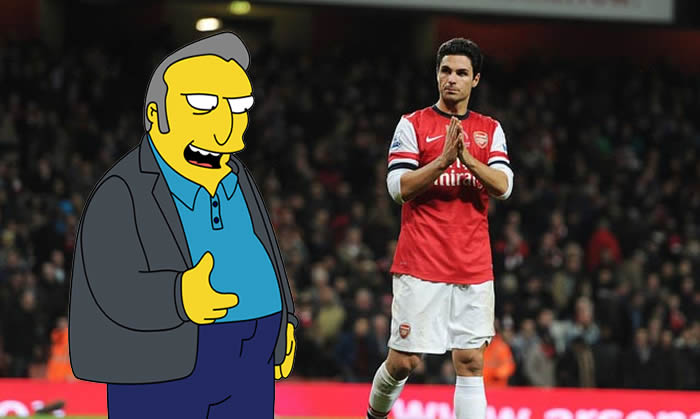 This has been a strange summer from an Arsenal point of view. On the one hand, we’ve got rid of a lot of deadwood, something which we really had to do. Players have left, we’ve cut our losses on some, we’ve decided others aren’t good enough. All of which was important and necessary.

On the other hand … well. There really isn’t much of a hand. It’s barely a finger. A young, French, injury prone pinky. And so the discussion, when it’s not interrupted by occasional bouts of football, has been very one-track. It feels like that scene from The Simpsons when Homer takes a loan from mafia boss, Fat Tony, to fund Marge’s pretzel business. He wants a return.

Except instead of pretzel money, it’s signings:

We could be talking about how this players is going to fit into the squad. And then we could turn to that player and wonder how his presence will increase competition. And then that other player we bought, bit of a risk perhaps, but one worth taking. Finally, can you believe we got this certain player? What a deal. What a piece of business. And what a boost to the squad he’s going be.

Instead, we’re still discussing the possibility of signings rather than the reality. We’re living in a sort of nebulous purgatory where we don’t really know what’s happening. What’s that light over there? Oh, it’s just the reflection off a window, not the end of the tunnel kind of stuff. So if it feels like discussions are something of a broken record, that’s because they are.

Like it or not, the appetite for Arsenal, and everything it does, is enormous. If you’re the kind of person who can ignore all the sideshows and everything else, then fair play, but people want to talk about their football club. They’re interested, they’re invested in it, and during a summer when there’s nothing else to do but wonder and hope and think about how we might improve our squad, that chatter revolves around transfers.

As I said, we’ve done one side of our business very well. Between youths who were never going to make the grade, and senior players whose careers had ground to a halt and who contributed little, we’re looking at 20+ players going out. That’s some ruthless efficiency right there. Maybe that’s the easy part but it would be nice if we could show some of that efficiency in the other department.

Mikel Arteta has been speaking about new arrivals, and for the second time this summer he has, to my mind, at least, made it quite clear that the team want new players. Not only that, he has questioned our ability to compete without them. He says:

If the club can target players who will improve the team they are going to be very welcome because that is what we want — a better team, better players to compete and win trophies.

I don’t think he can be much clearer. He’s not being terribly coy or understated. They want a better team. That comes from bringing in better players. Simple as that. In this article, I’ve collated the number of times Arsenal players have referenced new signings. Since July 15th, there have been 8 occasions. To the best of my recollection, that is unprecedented. I’ve never seen it before, certainly not in the all the time I’ve been writing the blog.

Those with longer memories might remember a strident Patrick Vieira dismiss the club’s chances of winning anything, not because of lack of signings, but because of the signings they made (this was the summer before we did the double, by the way). But these seem different. While accepting the players aren’t calling press conferences of their own to make statements about the possibility of new players, you can’t ignore the common theme that runs through their public utterances.

As the season draws closer, it seems to become sustained. They want to win things, they want the team to be a success, they want to compete for the league title, yet they know as well as anyone that without new faces that it’s unlikely. Still, for those of us looking for the silver lining, Arteta also seems confident that the requisite business will be done:

I think we are going to start the season with new faces. The club is working on that. It is in their hands and I am sure they are going to do it.

Before suggesting it might be a bit white-knuckle as we see things through right to the end of the window:

It takes time but I know the boss is working really hard on it and the board as well. It will happen, for sure. I am very convinced but the great players normally come at the end of the transfer window. The clubs work hard to keep their best players and I think Arsenal will do well in the transfer window.

Perhaps a self-deprecating reference to him and how late his arrival at the club was (funnily enough, for a club that got all pissy when Madrid put the Higuain price up, we had no compunction in changing the terms of Arteta’s contract at the last minute, almost scuppering the signing), but one would hope that he’s speaking from a position that is better informed than most of us. It seems hard to imagine that he hasn’t spoken about this to Arsene Wenger. To some extent, at least.

So, while I’m still completely and utterly in the believe it when I see it camp when it comes to the club, I feel much more inclined to believe our lego-haired, metronomic, hyperhunky midfielder. Maybe he’s being spun a line too, but I don’t know what that would achieve.

So my eggs, such as they are, are now in Mik’s handsome basket.