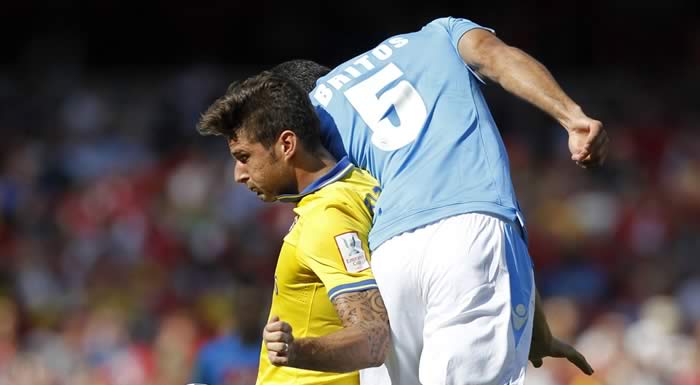 How do? A quick Sunday round-up for you.

Yesterday saw a 2-2 draw with Napoli in our first game of the Emirates Cup. Some sloppy defending from Carl Jenkinson, and a bit of unconvincing goalkeeping from Lukasz Fabianski, allowed the visitors take a 2-0 lead at half-time. This was despite the fact we’d pretty much dominated the game in terms of possession. Sounds a bit familiar.

In the second half we kept at it, struggled to really make good openings, but scored twice from set-pieces to get level. Olivier Giroud’s acrobatic overhead kick took a touch off Bacary Sagna’s back and went in. And when Reina pulled off a fantastic save from a Mertesacker header from an Arteta free kick, the outstanding Laurent Koscielny was there to nod home the equaliser.

On the balance I guess it was a fair enough result, but as this is just a pre-season game I find myself not really caring that much. Certainly not as much as some people did as the event was punctuated with smatterings of boos. There were some after the first Napoli goal (perhaps pantomime booing of the goal itself), at half-time and, bizarrely, boos aimed at Gonzalo Higuain when he came on as a second half substitute.

I mean, I get we’re all cheesed off with the fact we haven’t really strengthened the squad, and I’m all for the right to free expression, but booing Higuain? That’s daft. To be fair, they died down fairly quickly, but it just shows that you don’t need to scratch very far below the surface to tap into the frustration felt by many Arsenal fans right now.

Quite what it will achieve is another question. My guess is nothing. Arsene is as stubborn and intransigent as they come and will do what he wants regardless of the weight of public opinion. But I suppose the club have to balance their desire to hold these kind of corporate, money-spinning, pre-season jollies with the fact that there’s an increasing feeling we’re letting the summer pass us by.

It’s been 11 weeks since we played Newcastle. On that day, and in the weeks that followed, the club took advantage of the feel good factor to talk about our finances, our potential, our firepower and, above all else, our willingness to do business. Big business.

They set the level of expectation for the summer ahead, so while booing at a pre-season tournament is all a bit unseemly and not the right way to express the vexation felt, this is the bed that Arsenal, and Arsene, have made themselves and now they have to lie in it.

As expected Arsene was asked about potential transfers afterwards, and said of Luis Suarez:

I never said we have made a bid to Liverpool, now I can tell you we have made one, so at least that is some information. All the rest, I would like to keep to us. If we progress in that situation, we will inform you. At the moment, that is where we are.

I wouldn’t like to talk openly about negotiations because that is not my target in the press conference. I can just repeat what I said yesterday: until the 31st, which is one month in front of us, we will work very hard to strengthen our squad without naming any specific names because I don’t believe that will make negotiations easier.

So, pretty much the same as we were yesterday. However, there was some ‘good’ news as Wenger confirmed that Gervinho and Chamakh were most likely on their way out:

Gervinho we are at the moment close to an agreement with a club where he should go. Chamakh might go somewhere, it will be decided in the next 48 hours. Both are permanent moves.

But that was tempered with the latest update on The Greatest Striker That Ever Lived:

Bendtner we are nowhere. At the moment he is completely here.

He is completely here. Completely and utterly here. Truly, madly, deeply here. As I mentioned to somebody the other day, Bendtner is like a home made tattoo … on your face. A constant reminder of a stupid time in your life, and one you just can’t get rid of. I refuse to believe Arsenal haven’t moved heaven and earth to get rid of him at this stage, so the one common denominator in all these deals that have collapsed … well, it’s him.

Clearly it’s ego, money, money and ego, preciousness, cash, salary, wages, ego and his belief that he’s worth anything close what we’re giving him that’s causing the problems. Again, that’s a problem of our own making and one we’re going to have to live with. It wouldn’t be a surprise if this went right to deadline day, for the third summer running, and he ended up on loan somewhere. With us paying his full wages. Or twice his wages just to get rid.

It’s a situation made even more annoying by the fact that he is a considerably better player than Chamakh or Park and if he’d listened to the right people instead of the voices in his head and those around him who have convinced him money is the most important thing in football he’d be far better off for it. Yet we’ve played our part in creating the monster too. FrankenBendtner. How horrible.

Right, that’s about that. There’s a game against Galatasaray later in which we’ll get our first look at Yaya Sanogo. Let’s hope the young man gets a proper Arsenal welcome. It’s not his fault he’s the knitted, itchy jumper we got on Christmas morning when we were expecting a new bike.