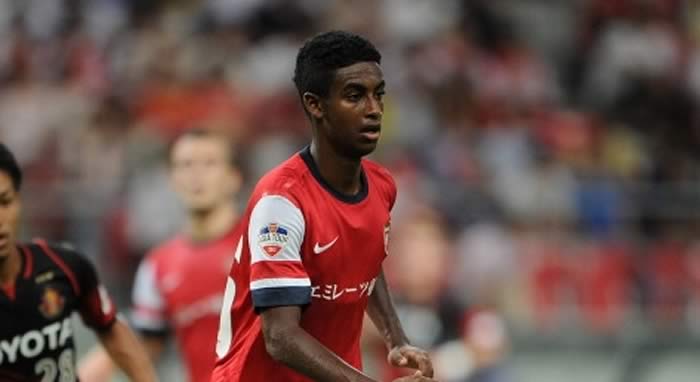 yesterday’s 3-1 over Nagoya Grampus was far more interesting than the previous two games, simply because the opposition were a lot better and Arsenal had to work a lot harder. The team looked pretty sharp, I have to say, some of the movement the pace of the passing was excellent. You can see the improvement physically from game to game, and obviously that’s hugely important at this point in the summer.

The goals were nice. A thumping Giroud header, a nice gesture from Mikel Arteta to let Ryo Miyaichi take a penalty at ‘home’, and a Theo Walcott effort in the second half which came from a quite wonderful pass from youngster Gedion Zelalem.

I’m always wary of over-hyping young players but every once in a while one comes along who generates a buzz naturally through his own performances. The boy has an eye for a pass that is full-on Fabregassian, he can spot things in and around the box that few others can and he’s got the technical ability to pull it off. Quite something, and in the absence of new signings to look at, it’s little wonder that he’s caught the eye.

As you’d expect he’s drawn praise from Arsene Wenger, but also from Jack Wilshere, who said:

He sees passes that not a lot of players can. You think: ‘what’s he doing?’ and suddenly someone is in. It won’t be long before he’s ready. He’s so comfortable on the ball. Even in training he’s a nightmare to play against. He keeps the ball away from you and shields it. He’s not very big but he’s strong. He drifts in and out of players. He’s quite a strong lad and technically he’s right up there.

High praise indeed, and those that play down what Zelalem is doing because of the quality the opposition miss the point, in my opinion. If it’s just down to how bad the other teams are, why aren’t other players splitting defences open with such alacrity? It looks like it just comes naturally to him, which is the most enjoyable thing for me. Sometimes you can see player try but not quite pull something off, this lad just does it.

That said, at 16 he’s still some way from the first team, in my opinion, but he’s been fast-tracked onto the tour and he’s taken the chance to show the manager that there’s a good reason why people behind the scenes have been very excited about this boy since he arrived at the club. I’d say some Capital One Cup football is a good bet for him next season.

For some flavour of Japan, check out the tour diary on Arseblog News.

Meanwhile, injury worries at the back continue with the news that Nacho Monreal is going to miss the start of the season with a back problem. Arsene Wenger said:

Now, I like Gibbs and I think he’s improved a great deal over the last 12-18 months, but his injury record wouldn’t fill you with confidence that he can stay fit and play all the games necessary. Thomas Vermaelen, who can fill in there, is also out for around three months, so any knock to Gibbs and we’re in a bit of trouble there. Especially when you consider the best young prospect at the club, Jernade Meade, saw no way past the senior players and decided to leave the club at the end of last season (he’s since joined Swansea).

With just one fit senior centre-half right now (although Koscielny’s injury is not thought to be serious), it would make sense if Arsenal were to find a left-footed centre-half who can fill in at left back if required. There’s a candidate in the squad in Ignasi Miquel but it all depends on how he’s viewed by the manager. Is he ready for first team football with us having made just three appearances last season (compared to 9 the season before)? Is there a reason for his arrested development? Will Arsene sit there at the start of the campaign and say ‘I’ve made a huge mistake’?

Whatever the crux of that, it seems vaguely ridiculous to me that Arsenal, sitting on the resources they have, should be facing a situation like this with the season fast approaching. Even with everyone fit there’s a good case to be made for adding a defensive reinforcement, now we’ve got two senior players who will miss the first part of the season, injury or suspension to any of the others leaves us desperately short, and there’s really no need for it to be like this.

Finally for today, fun stuff in the Spanish press. No, really, you’ll love this from AS.

Headline 1 (picture of Higuain) – Napoli and Madrid reach agreement over the Argentine. Sub-head: ‘Pipita’ will play in Italy. The player just needs to sign.

Headline 2 (picture of Suarez) – The sale of Gonzalo Higuain brings Suarez closer to Madrid. Sub-head: Luis Suarez has shown his desire to go, but Liverpool won’t let go of their star striker for a small fee.

If only they’d tried to get that message to us in a way we might understand.