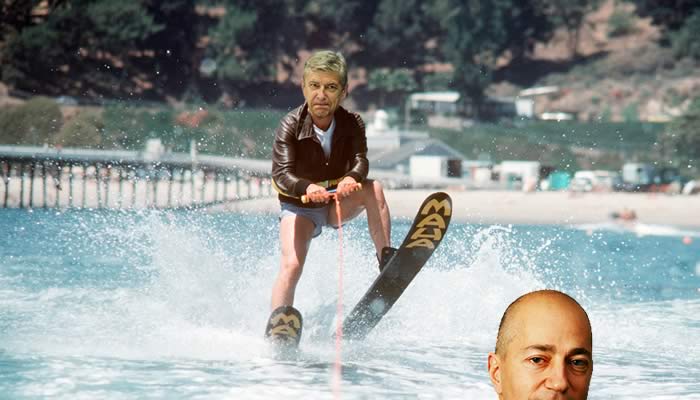 So, according to all and sundry, Arsenal made a bid of £40,000,001 yesterday for Luis Suarez. The bid was rejected but the £1 means that it’s above £40m and due to a clause in Suarez’s contract, he has to be informed of it.

It doesn’t mean we get to talk to him, or anything like that, just that he must be made aware of our interest. As if he didn’t know already. And so the most divisive Arsenal story of recent times rumbles on. Honestly, I don’t think I’ve ever experienced anything like this in all the years I’ve been doing the blog.

Yes, we have our factions, like any club. There’s the position people have over the manager. Some back him completely, some want him gone at once, others take a more nuanced view, but to me that’s a very natural state of affairs at a football club as big as ours that hasn’t won anything since 2005. I’ve often bemoaned the viciousness of the argument, but I understand completely why it exists.

Yet objection to the signing of Suarez has led to some of the most virulent abuse I’ve ever received in all the years of Arseblog. There have been veiled threats of violence because I’m honest about the fact I’d prefer if we didn’t sign him. ‘Suarez or nobody?’, some people ask. But it’s never been Suarez or nobody. It could have been Suarez or Higuain or Jovetic or Soldado or Llorente or other top strikers who were available this summer.

Yet now, people are falling over themselves to make excuses for him. Like the Liverpool fans everyone so roundly mocked because of their deep understanding of South American Spanish and in the intricacies of the use of the word ‘negro’, some Arsenal fans are now cunning, expert linguists. They know what he said, how he said it, what it means on the streets of Uruguay, and look, Evra is a twat anyway so it doesn’t really matter.

My advice to anyone who feels like excusing him for the use of racist language, and abuse based on the colour of an opponent’s skin, is to read the report. In full. Not the bits that were just bullet-pointed in the newspapers. All of it. Here it is. For the record, I cannot bear Patrice Evra, but nor can I read what happened and then point the finger of blame at him just because he’s an arsehole who has annoyed me in the past.

The biting thing is laughed off as a bit of childishness, which I can get if that’s all it were, but for me it was a loaded bite. It carried more weight than a nibble on Ivanovic. Suarez might act stupidly but I don’t think he is. Having done exactly this before, he knew that it would go a long way to making his position at Liverpool untenable, thus allowing him to move. Ignore that if you want, but don’t come crying when he does something similar as soon he gets the hump at Arsenal/English media/the FA/the weather, whatever.

Not wanting Suarez is somehow seen as not supporting the club. Which is nonsense, of course. The club is the first thing we support, the only thing really. The personnel are transient, they come and go, but the institution remains. What would I do if Suarez signed and scored a goal? I’d celebrate an Arsenal goal, because that’s what it is, first and foremost. Personal objections can remain. Ultimately, what can I do if Arsenal sign him? Accept it, move on, keep watching my team. I still don’t have to like it.

Then there are the straw man arguments, about how we’ve had problem players in the past. Tony Adams was a drunk driver. Paul Merson did cocaine. And we supported them. Yes, indeed we did, but the difference here – and I realise this might be subtle – is that a) they grew up at the club and b) we didn’t spend £40m on them. We didn’t break the club transfer record to bring in somebody we knew was a serial drunk driver. We didn’t spend a fortune on a guy knowing full well he had a drug problem.

Suarez’s problems are front and centre, obvious to everyone. And to those who say football isn’t about morals, that people err and should be forgiven, that’s a perfectly acceptable point of view. How can anyone argue with it when the captain of Chelsea, and former captain of England, gets a 4 match ban for the kind of racist language that would see a supporter, rightly, banned for life if he or she were found guilty of it? That’s the football world we live in, but that doesn’t make it right.

In the absence of alternatives or options, it’d be even easier to overlook a player’s indiscretions, but we’re talking about spending more than £40m on a player whose on-pitch behaviour has brought shame, not just once, to Liverpool; has seen him suspended for a huge amount of games; whose current suspension means he can’t play in the Premier League until October, and who is willing to do whatever it takes to leave his current club when he feels like it.

Another thing to bear in mind is that because of this ban, Liverpool will be in no rush to do any kind of deal. They can drag this out as long as they want and a summer which was all set up for us to avoid a long, protracted saga becomes all too familiar. They won’t want to sell to a Premier League club either, so the £40m + £1 is going to have to get a lot bigger to convince them, and I question if that’s the best use of that amount of money.

Suarez is much better than Higuain, people say. I don’t agree (note the personal opinion). He might be better (despite what the stats tell us – and no, stats don’t tell the full story), but is he £10m + all the baggage and risk that comes with him better? Not to me. He’s certainly not £15m or £20m better, which is where we might have to go to get him. And will one striker make the difference between us winning the league or not? Chuck in a couple of centre-half injuries, a crocked Arteta, and Suarez won’t make that much difference to anything.

So those are not moral objections, by any stretch of the imagination. I don’t think it’s unreasonable to be worried about the risks involved with such a huge investment, and I don’t think, on July 24th, that it’s unreasonable to concerned that this appears to be everything right now, and there’s not much else going on to strengthen a squad that really, really needs it to compete this summer.

But look, having said this, my final point is thus: I can understand people wanting a player like Luis Suarez. If they don’t have the same concerns I do, that’s entirely up to them. I’m not telling anyone how think. I’m making the outrageous assumption that most of the people who read what I write are adults, capable of making their own minds up on this and everything else.

So, bearing that in mind, why not return that courtesy? I’m more than happy to discuss this thing with anyone, at length, and spent a long time on Twitter yesterday replying to as many people as possible. If you don’t agree with me, that’s fine. I’ve been blogging about Arsenal since 2002, but I’m not claiming to be infallible. The very fact I’ve been blogging for ages means I’ve been wrong plenty of times.

But what I’ve always been is honest. I don’t see the point in saying things I don’t mean. I’m being as honest and up-front as I can be about Suarez and if you don’t like my opinion, that’s entirely your look out, but it’s nothing personal, is it? There’s no need be abusive or nasty just because we think differently about this particular issue.

I believe that this is piece of business that merits serious discussion, for all kinds of reasons. The price, the issues, what it does for the team, how it reflects on the club, what is says about what we can do in the transfer market, but that discussion has to be civil, not the basis for civil war, which is what it threatens to become. And that in itself, that one fact, is worth giving serious consideration too.