It almost feels as if we’re judging Lukas Podolski for the first time in an Arsenal shirt yet surely it is too late for first impressions. After the 1-1 draw with Manchester United in which Podolski finally got his opportunity up front, it’s still not clear whether he’s the answer.

It was actually Podolski’s second start as the focal point of Arsenal’s attack, having began the season against Sunderland in that role and then again in the defeat to Swansea late last year, although for only 40 minutes alternating with Gervinho. For the most part though, he’s been deployed on the left side of a 4-3-3 where we’ve come to know him, scoring 13 goals and making 10 assists, and Sunday was the chance to see if all that wait was worth it.

It wasn’t, or rather, it wasn’t a match where we learned too much new about Podolski. And there lies the conundrum: at 27 years old, is it too late to expect Podolski to transform into all-round striker that Arsenal need? Certainly, his first touch was a significant one, as he dropped off his marker to receive possession and then laid it off for Tomas Rosicky to feed Theo Walcott for Arsenal’s goal. (In contrast, his opposite number Robin van Persie’s first touch also led to a goal – it too Arsenal’s opener – having slipped as he attempted a pass and Arsenal broke to score). That was in the second minute. For the rest of the match he showed glimpses although it must be said that it would have been a difficult game for any striker to make an impression.

Lukas Podolski received the ball 32 times, mainly in the area between the opposition’s midfield and defence. Indeed, that’s not unexpected. Shorn of pace, and perhaps the dexterity of movement to get away from his markers, he likes to play short simple passes to his team-mates and then look to try and spin away from the defender. It’s how he has scored most of his goals for Arsenal, playing one-twos and then getting into positions so he can shoot across goal. Indeed, Podolski only had one shot against Manchester United – his only touch inside the box too – receiving the ball on his left side to force a save out of David De Gea. 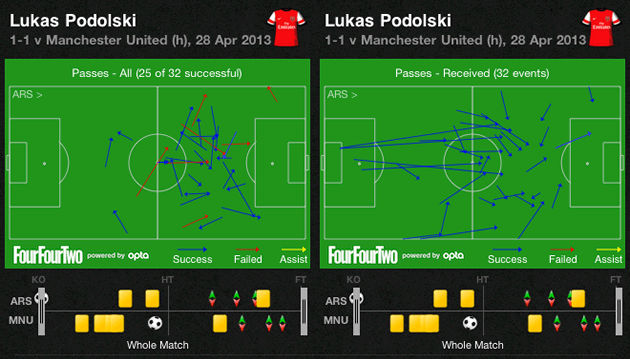 Podolski’s lack of pace – nay his lack of movement, was evident in one piece of action where an admittedly over-hit pass by Aaron Ramsey was played his way, but Theo Walcott had already seen the space and came darting infield. Nevertheless, Podolski looked sluggish attempting to get on the end of it. Perhaps this part of his game will develop over time, because Robin van Persie was also hesitant in playing on the shoulder of the defender at the beginning of his transformation to a number 9.

What Lukas Podolski does bring however, is extra link up to the midfield and certainly, his ability to combine with the ball-players owed a lot to Arsenal’s good start. Indeed, they say the two most forward players, in this case Podolski and Rosicky, must be as one and the pair exchanged passes 18 times in the whole game. What Podolski must do now however, is to extend that understanding further up the field. Because we never got a chance to see his ability to finish and had he had just one sniff in front of goal, Arsenal would have been confident of getting the decisive goal.

Podolski also needs to offer himself more of an outlet from crosses and cut-backs because at times he was slow to get into positions and in the end snuffed out. Olivier Giroud has developed this understanding with Theo Walcott, as did Van Persie last season. But perhaps, as the average positions diagram shows below, the actual striker wasn’t Podolski but Walcott who scored Arsenal’s goal.

Podolski’s tendency to drop deep and create an overload in the midfield allows Walcott to stay upfield and thus a chance to use his pace against the full-back should someone play him in. Actually Walcott probably did this too often against Manchester United and instead should have remained wide so Arsenal could work the ball into the box. As it was, moves broke down too easily in the second-half because the team was short of passing options.

It was perhaps apt then Podolski got his chance up front when Robin van Persie returned to his old ground. Because Podolski will never be judged solely against his strike partners (partly because there really isn’t any!) but also against those who had played previously. Arsenal’s draw with Manchester United was frustrating because it was a chance, especially after their breathtaking start, to make their momentum count. But the team lacked quality in the final third to really be ruthless.

To get to that level, it would require the players to fine-tune their understanding and others – where much is expected of them (Ramsey and Jack Wilshere) – to step up quickly. As such, a lot is dependent on Santi Cazorla – and perhaps Arsenal can lean on him because he’s that good – but of course, that thought would not exist had Arsenal have the quality to back him up. And in the past, Arsenal have had the strikers with the all-round ability to contribute in both the scoring and build-up play. All previous Arsene Wenger teams have had that. Perhaps it’s not too late to say this one does.