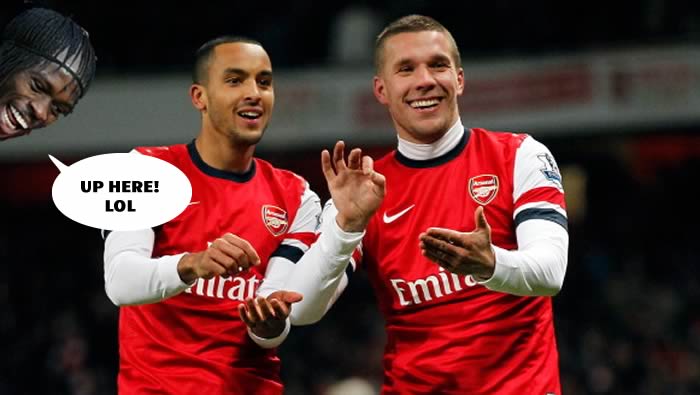 it seems somewhat quieter this morning. Hopefully there are a few Manchester hangovers, some of which include acute food poisoning and 72 hour ebola as they ready themselves for the trip to play us on Sunday.

The Arsenal news yesterday was not particularly good as Olivier Giroud’s red card appeal was rejected. The FA’s disciplinary committee  – who rescinded an over the top because he slipped red card challenge by Vincent Kompany on Jack Wilshere – decided not to do likewise for the Frenchman, but it’s no surprise really.

The issue now is that we have to find a solution ahead of a game from which we definitely need something this weekend. There are three obvious candidates, it’s probably worth looking at their pros and cons. Starting with:

Pros: Plenty of experience as a striker for Cologne; left foot like Thor’s hammer; takes a good free kick; some of his finishes this season have been outstanding

Cons: Has been nursing an ankle injury since September, meaning he’s sluggish and lacks pace; has barely been picked there all season, suggesting Wenger isn’t convinced; may require a London cab to get him through 90 minutes

Pros: Still the top scorer; has lots of pace; is quick; is very fast; can run at high speed; velocity goes to 11; is capable of sprinting with great alacrity; once beat Speedy Gonzalez in a race; after a few weeks out should have plenty of energy

Cons: Unsuited to playing as a central striker in this system; hold up play non-existent; will be out-muscled by United centre-halves; form is in the toilet since new contract

Pros: Live-wire, full of energy and running; is also fast; had a decent spell there early in the season scoring 5 goals in his first 7 games; has found some form recently; unpredictability makes it hard for defenders to know what he’s going to do

So, I think what that tells us is that there’s no obvious solution at this moment in time. Were he fully fit then it’d have to be Podolski, but unless we can get him juiced up like a hepcat on boogie-woogie pills it’s difficult to see how he’d manage. I remain entirely unconvinced by Walcott in a central role, regardless of how often he tries to hint he wants to play there by drifting in from the right and leaving Sagna scratching his head about who to pass to. Therefore, by default, it could be that Gervinho is the best option.

Which leads me to the conclusion that those ‘fans’ who celebrated Giroud’s red card and suspension after the game on Saturday are even more stupid than I thought. And that’s quite the feat because I thought they were pretty stupid to begin with. There’s nobody saying he’s the perfect centre-forward, I doubt there are too many people completely blind to the flaws he has in his game, but roistering over the absence of our only real central-striking option is mindless at this point of the season.

Yes, it points to a lack of depth in the squad, but that’s hardly news – it’s been a topic of discussion for the entire season. I’ve feared a time when the paucity of options would come back to bite us in the arse, and unless one of the three above steps up, then we could find the final four games of this campaign tough going.

That said, another point worth bearing in mind is that although we certainly lack forward choices, the goals don’t have to come from forwards. We’ve got talented midfield players who, Cazorla aside, have a very poor return in front of goal this season. Arteta’s have all come from penalties (I think there might have been one scrappy 2 foot header), Aaron Ramsey has 1, Jack Wilshere has 2 and Alex Oxlade-Chamberlain 2, but only the latter has scored in the Premier League (during the 7-3 win over Newcastle).

Tomas Rosicky got 2 the other week against West Brom, but that’s not as healthy as it could be. In the absence of Giroud, and when the forwards are going through a period of difficult form, you look to other areas of your team to help and there’s no doubt the midfield could contribute more in that regard.  Anyway, as the week goes on and we hear more from the boss we’ll be able to get a better idea of what he’s planning on doing.

On the flip side, for all his suitability to the role, it’s not as if Giroud is a goal machine who has been banging them in left, right and centre in recent weeks. He’s scored 3 in his last 12 appearances, so while he’s the man who fits the central striking position best from the squad we have, it’s not as if we’re trying to replace our only goalscorer.

Perhaps it might refocus others, force them to step and take responsibility. Somebody’s got to. The points are too valuable for that not happen. I guess we’ll find out who, if anyone, is ready for that.