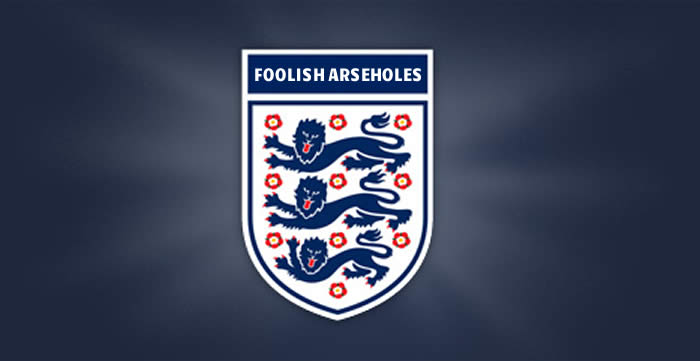 Morning from a thoroughly wet and miserable Dublin. We had sun the other day and it was quite warm. Please join me in a moment’s silence/applause for the passing of summer 2013.

Anyway, all the talk this morning is of Luiz Suarez and the 10 game ban he’s been issued by the FA for gnawing on Branislav Ivanovic. If it seems harsh the very obvious answer is that in order for a player to escape a 10 game ban, he ought not to bite an opponent – especially not when he’s had previous with the FA over being racist.

There’s simply no condoning what he did, you can’t find any excuses for it, and on the face of it a 10 game ban isn’t that unreasonable. He bit a man, for goodness sake. A professional footballer, earning as much money as he does, representing his club, acted like a toddler. If he’s got issues and problems with anger, that’s his look out. Liverpool knew he was capable of being all bitey when they bought him, and after a 7 game ban in Holland for the same thing, they can’t get away with acting shocked and surprised over the antics or the outcome.

What makes the whole thing such a contentious issue is that when it comes to the FA, and their completely arbitrary disciplinary system, it doesn’t make sense when compared with other bans. Suarez himself was given an 8 game for being racist, is nibbling an opponent 2 games worse than that? And why was Suarez’s racism twice as bad as John Terry’s who only got 4 games? They might say repeated utterances of the word he used against Evra, but racism is racism – and if there was some linguistic confusion over the Suarez affair, the impact of calling your England teammates brother a ‘fucking black cunt’ can’t be obscured in any way.

The chief magistrate of the case, said:

There is no doubt that John Terry uttered the words ‘fucking black cunt’ at Anton Ferdinand. When he did so he was angry.

Yet his words were deemed half as offensive by The FA. 4 games as opposed to 8. Ben Thatcher was given a 9 game ban for a horrendous elbow on Pedro Mendes. Paulo di Canio 12 games for pushing a referee. Mario Balotelli got away with nothing for this, Callum McManaman escaped punishment for this, yet Shawcross got 3 games for this, Martin Taylor 3 games for this and Dan Smith got just a yellow card for, essentially, destroying Abou Diaby’s career.

Ramsey was out of action for 12 months and is only now finding form and consistency after the incident which took place in February 2010. Think on that for a minute. Eduardo came back after 12 months out but never regained the sharpness and form which made him look a good addition to the team in the wake of Thierry Henry’s departure; and while Abou Diaby’s injury problems are something of a joke, it’s not really funny to think how one shocking tackle has impacted so greatly on his career.

So as those men spent years, collectively, out of the game, the men who inflicted the injuries on them returned after 3 games (or served no ban at all). Some contrite, some of them not learning a single thing and playing in the same reckless way, and still there has no effort whatsoever by The FA to address the issue of serious foul play in the game. Maybe as Arsenal fans we have a vested interest in this, but no other Premier League club has suffered as many serious long-term injuries at the feet of reckless opponents.

The FA willfully ignore violent, dangerous tackles because it’s a can of worms they don’t want to open and they can hide behind excuses such as not being able to judge intent. Yet they happily ignore consequence.

As I’ve pointed out on this blog before, their system, which they say prevents them from handing out further punishment once a referee has seen an incident on the day is not based on any FIFA edict. It might well be a case that the clubs backed it – and I hope the clubs can now see how wrong that is – but it is entirely their own rule. In other jurisdictions a referee can deal with something and, once it’s reviewed by people who can see it again, from different angles and better judge the incident, further punishment can be meted out.

I’ve long been a proponent of a sliding scale for red cards. Some are worse than others, it’s as simple as that, and until there’s some measure of fairness and logic introduced then people won’t have any faith in those who are tasked with running the game. We have the ludicrous situation where tackles like that of McManaman go unpunished and Giroud gets a three match ban for his, semi-accidental, red card against Fulham.

Grant Holt got away with one the other week against Swansea, there was a nasty one in the Chelsea Liverpool game the other day (might have been Sturridge) which was definitely deserving of a red, but because of the FA’s incomprehensible system these dangerous tackles are not dealt with. Which leads to more dangerous tackles because players feel like they can get away with going over the line.

In the same week that Shawcross broke Ramsey’s leg, Jeremie Aliadiere was playing for Middlesbrough. He lightly tapped an opponent on the face with his hand. He was sent off, by the letter of the the law the correct decision. His behaviour was deemed ‘violent conduct’ and he received an automatic three match ban. Boro appealed. An extra game was added for a frivolous appeal. So, the bloke who put a fellow professional out of the game with a leg snapped like a twig got 3 games and a lift home by his mommy, Aliadiere one game more for very little indeed.

The FA need to set up a thoroughly independent panel who have the power to review incidents in games, regardless of whether or not the referee has seen them or not. If the automatic three match ban stays in place, they should be given the power to increase it if they feel it necessary, or lower it should circumstance dictate. Ideally, there’s starting point of a one match ban for a red card which the panel then adjudicate on in the wake of games and decide if any further punishment is necessary.

For all the ludicrousness of Suarez’s behaviour which was infantile and has no place on a football pitch, as long as the powers that be ignore more serious issues then their credibility remains in the toilet. They’ve acted quickly and decisively over this incident, they may want to pat themselves on the back for it, but all it’s done is show, once again, how utterly broken their disciplinary system is.