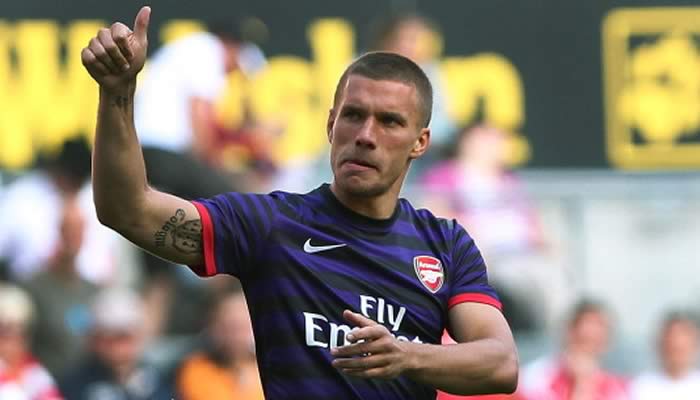 Morning from a thoroughly miserable Dublin. I think it’s time we extradited some of this rain to somewhere that might actually need it.

The first week of the Interlull draws to a dull, tedious close and the first round of games take place tonight. You can see a full list of who’s in action on the official site. Interestingly, Lukas Podolski is fit for Germany and should play, which will hopefully see him ready and sharp for our remaining nine games.

Yesterday, I was watching a video of Cazorla’s goals and it’s noticeable how often Podolski is involved. Whatever about his apparent inability to do 90 minutes as often as a normal person, but I do think that if we’re going to scrap as hard as we can for 4th spot then we need him to contribute. It’s a shame that his injury has coincided with a period when Walcott has failed to score in 8 games and Olivier Giroud has just one in that same time-frame.

I think his absence has blunted the effectiveness of those two. The delivery from the left is generally very good and it did look as if he and the HFB were building a good understanding together. So, fingers crossed he comes through the internationals well and can slot back into the side on his return to England.

Meanwhile, Wojciech Szczesny released a statement yesterday to respond to the criticisms his father leveled at the manager and the club. Via the official site, he said:

I would like to apologise for the comments made by my father which have been used by both Polish and English media. I’d like to make it clear that those were the views and opinions of my father and not mine, and although I respect his views I cannot accept them as I find them disrespectful to the club I truly love.

I have been at Arsenal Football Club for seven years now and I have always shown my full respect to the Club, Arsène Wenger, all the coaching staff, my team-mates and the fans.

I’ve always felt that I received great support from the manager and the fans and I am fully focused on getting back to my best. I am proud to be a part of Arsenal and I see my future at this great club.

And while there might well be a certain amount of damage limitation, I think we have to take this at face value too. He does have a genuine affection for the club, having come up through the ranks with Wilshere, Gibbs and co. He’s accepting of the fact that he hasn’t been at his best and needs to work hard to get his place back, and he’s perfectly entitled to disagree with his father who, let’s face it, didn’t do him many favours with his outburst.

He could just as easily not said anything and this whole thing could have festered and bubbled under, and with the way things are at this moment in time it would have been unfortunate to have that kind of situation. And lest people think he’s not genuine, hark back to his interview with Amy Lawrence a few weeks back:

I came here as a 16-year-old boy and everything I know right now, I know from this club and the people who took care of me when I was young. People I have met here have given me so much. It’s everyone. I love this place. I feel I have something I want to give back to them. It gives me a lot of desire to do well.

I don’t think anyone would say he’s been at his best I think we also need to take into account that he’s a young goalkeeper playing behind a defence that has been wobbly all season long, and in a team whose focus on the defensive side of the game has been seemingly negligible at times. Fabianski has kept two clean sheets, and fair play to him for it, but there’s no doubt in my mind that he’s benefited from a much more organised defensive unit and a team that works harder not to concede goals.

The other thing I’ll throw out there, and it’s something I’ve mentioned before, is that perhaps we need to look a bit deeper when it comes to our goalkeepers and their various/collective flaws. There’s a commonality to them and unless we’ve been extremely unlucky to have selected keepers who all share the same difficulties in their game, maybe there’s another reason for it. There was such a clamour for something to be done about the defence, with all and sundry pointing to the coaching, or lack of it. Why does the buck stop with the keepers and not continue as far as the training ground?

Something to ponder, I guess. Right, that’s your lot for this Friday, as I mentioned yesterday there’s too little going on for a ‘cast. Back tomorrow.