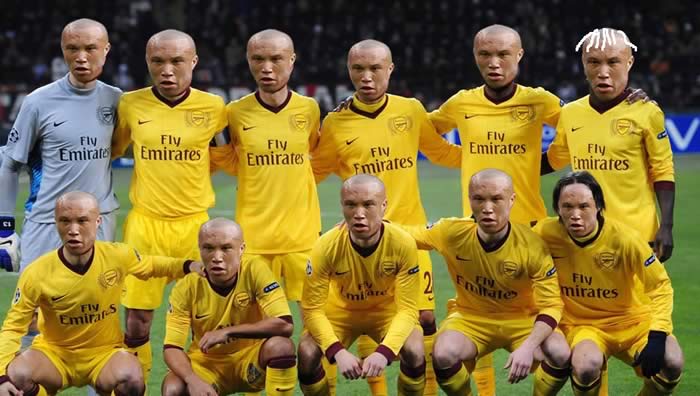 Someone said to me recently that I should have an all purpose post for days like this. Days when there’s nothing going on.

I could simply take it out from the back of the blog cupboard, lash it up and all would be well. I said to this person that this was a good idea and I would certainly think about doing something exactly like that. I wish I had thought a bit more because I could use it right now. It’s one of those days, nothing of any interest going on at all because of the internationals.

Even plumbing the very depths there’s nothing but transfer stuff and with 9 games still to play this season I refuse to pay any attention to that. We’ll have a whole summer to sift through that muck and the reality is that what we do then will be dictated to by what happens between now and the end of the season.

There’s a bit of stuff about Wojciech Szczesny but I think more than enough has been said about him this week. A speculative piece about Jack Wilshere returning from injury but I’m disinclined to believe anything until we see him back out there again or, at least, hear something concrete from somebody reliable.

Maybe, as others have shown, the future is not writing stuff yourself, but simply publishing people’s emails then replying to them. I could try, I suppose:

We are one of the best digital images retouching/editing professionals located in China. We provide all kinds of image editing solutions to different companies all over the world.

We provide best quality service in best price. We are waiting for your reply.

ARSEBLOG SAYS: Thanks Rick, at the moment I’m not in need of any photo-editing services, but I do appreciate the fact that you relentlessly send me emails to remind me that you are one of the best in China.

I like the fact there’s a humbleness to your approach. You’re not claiming to be the best, just one of the best, and in a world where people, especially those who engage in mass email campaigns, are very often bumptious, vainglorious blowhards, then this is a refreshing change.

The fact is, until Arsene Wenger coaches his defence then what is the point of worrying about images at all? Things change so fast that the minute you’ve finished digitally touching me up, Thomas Vermaelen will have made another huge boob and Arsenal simply don’t have firepower to cope with that.

No amount of adding transparency or playing around with hue and saturation can mask (get it?!) the problems at Arsenal.

I’m not sure my emails are as on topic as they should be. I give up.

ps – the picture is to remind us all that things could be worse. Much, much worse.