It’s difficult to make sense of the decision to substitute Olivier Giroud when Arsenal needed a win for the defensive midfielder, Francis Coquelin, but it certainly didn’t warrant the chants aimed at Arsène Wenger. When Wenger did remove Giroud, however, on the 86th minute, it was ten minutes after they had attempted what would be their last shot of the match – by Aaron Ramsey.  Arsenal’s game had started to become inaccurate and whilst that doesn’t make any clearer whether Wenger actually “knew what he was doing” (and the inaccuracy of their forward play might have just boiled down to their desperation to get the three points), such outward thinking to freshen Arsenal’s tired approach should perhaps even be applauded.

Coquelin’s fresh legs would bring energy to the team – some direct running – and anyhow, it was evident Giroud levels had dropped considerably in the last quarter. The two substitutions Wenger had made previously, bringing on Gervinho and Andrey Arshavin, added to that feeling of inaccuracy as both are more known for being mercurial threats rather than trusted arsenals. Indeed, Gervinho then moved to centre-forward and had a couple of chances to get behind which Wenger thought wasn’t happening all game. Four minutes, though, was a bit late for such a considered style.

The substitution, in a nutshell, sums up Arsenal’s lack of depth. Marouane Chamakh patently wants out as he didn’t even figure on the bench while Jack Wilshere was only there – carrying a knock, no least – as a last resort option. But it also summed up Arsenal’s lack of “depth” from a tactical viewpoint. Once again, Arsenal passed pretty well despite Aston Villa putting decent pressure at the back but the team lacked ideas in the final third. It was a shame because as Wenger says, Aston Villa gave “room to play”, particularly in the first-half (while in the second-half, they naturally dropped back and split defence and attack).

Arsenal didn’t have the tools in their armoury to make use of the extra space. In the 3-3 draw against Fulham, we saw how both sides, who had trouble passing it through each others midfields, broke through defensive lines through players who can spin into space. Dimitar Berbatov and Bryan Ruiz were key for Fulham while for Arsenal, they relied mostly on Santi Cazorla to step away from markers and then the release quickly of wide forwards.

Against Aston Villa, the passing failed to stick on a greasy surface and as such, it needed players of exceptional ball control. Cazorla was overly relied upon but he was unable to dictate the game but the rest of the team, you wouldn’t describe as good dribblers in tight situations. In that sense Arsenal missed Wilshere although Ramsey had a strong game and his running to try and break through was at least positive (and was Arsenal’s main threat too). Last season, Tomas Rosicky and Robin van Persie were the players who quickly spun into space and changed the direction of Arsenal’s attacks and this season, Abou Diaby started in that vein. The Gunners need more players who can change the emphasis from the neat and intricate. “The key to Arsenal playing well, being penetrative and dynamic, is when players turn on the ball,” says former Arsenal midfielder Stewart Robson. “When they’ve got their back to goal, suddenly they turn and look to play the next ball forward.”

The team missed also, the Bacary Sagna-Theo Walcott axis who have been Arsenal’s most dangerous weapons, especially when they play their quick give-and-goes. That was replicate in sorts, by Kieran Gibbs and Lukas Podolski on the other side where most of Arsenal’s danger came from.

Returning to the subject of a lack of “depth”, it said that top attacking sides must “make the pitch as big as possible” when going forwards and make it as “small as possible” when defending. Vicente del Bosque adds that there are three facets that contribute to a good performance: “possession, pressure and depth.” By and large Arsenal, within their own means, achieved good pressure when defending, winning the ball back many times. But going forwards, they lacked men who could stretch the pitch. At a number of times with possession deep, Wenger urged his men to push forward and play as much as possible, in the opposition’s half. The failure to do this is illustrated by the person who found Olivier Giroud the most during the game: Per Mertesacker with ten passes, each time when the striker was forced to drop deep. 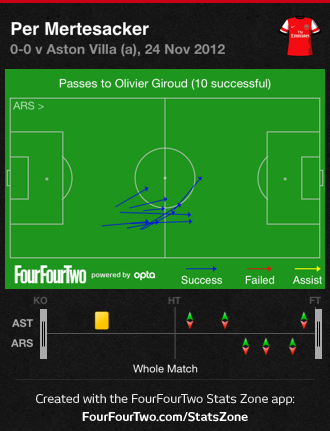 When Wenger told Giroud to play closer to the “offside line” after the 2-0 win against Montpellier, it was not just to use his strengths in the air. When Giroud’s movement was lateral as opposed to backwards on Saturday evening, he created the best chance by crossing the ball to Laurent Koscielny. Indeed, Arsenal’s crossing game can only work when the ball is moved wide quickly; catching the opposition by surprise otherwise it’s easier to defender. As such, if that doesn’t happen, you are more and more likely to see this (although is crossing really a default tactic to rely on?).

However, saying all this, it was a good bad performance by Arsenal considering the result. Their shape was superb, mirroring how they defended at the start of the season, Koscielny in particular having a fantastic game; it’s getting the attack to click which has been the main issue. More depth can be the only solution to the problem.