Speed has always been the greatest virtue of Theo Walcott’s game but waiting for the rest of his game to catch up, has required a large dose of patience. During one training session for England, before the 2010 World Cup, coach Fabio Capello halted training every time Theo Walcott made a run inside. Walcott did it out of habit; for Arsenal, allowed the freedom to get into positions where he could be most dangerous. For Capello it was different. He felt that Walcott’s pace would be less useful where space was was most congested on the pitch and each time he darted infield, Capello would instantly blow his whistle.

In his book, Theo: Growing Up Fast, Walcott admitted that he was “confused” by Capello’s instructions; that curbing those instincts was not his game. He has always been destined for, in his head, to play upfront and when he signed for Arsenal, and given the chance to develop under the tutelage of Theirry Henry, the design was set in motion. Arsene Wenger has always promised his winger that a striking berth would only be a matter of time and despite encouraging words in public, he has quietly been waiting for the right moment. And that moment might have arrived on Saturday when Arsenal defeated Tottenham Hotspur 5-2, in the North London Derby.

Theo Walcott was instrumental in Arsenal’s demolition of their closest rivals. Every time he received the ball out wide, his delivery was threatening even if didn’t always find his target and his directness, whether taking on the full-back or drifting inside, encapsulated the urgency of Arsenal’s play. And at the end of the match, he was given his chance to lead the line and duly delivered with a goal of his own. Wenger praised the increasing maturity of Theo Walcott’s all-round game: “He is a different type of player, he can play up front and he can also play up front with Giroud. He has found a good mixture of positional play on the wing now, and he is difficult to stop.”

As always though, Wenger was quick to add a caveat and that Walcott is only as good as his team-mates around him. “He finished as a centre forward [against Tottenham] and scored a goal,” Wenger told Arsenal.com. “But when you play with the midfield we have – Wilshere, Cazorla, Arteta – they will find you in any position if you move well.”

And that’s the key point to Theo Walcott playing well, whether it’s up front or on the flanks. Walcott must be indebted to some degree, the role Bacary Sagna has played liberating him and in a sense, allowing him to play as a striker. It’s the same job Kieran Gibbs did earlier in the season when playing with Lukas Podolski. Their energy getting up the pitch and their tactical-nous, gives the freedom to the wide players – who are like strikers in Arsene’s system – to move with freedom. Certainly, one only has to look at how Podolski’s fortunes have fared while Gibbs has been absent.

Of course, Walcott’s improved maturity has had just as much part to play to play in his recent good performances. His touch is full of confidence now: just re-watch his control in the build up to Arsenal’s fourth against Tottenham. And his movement is less predictable and a much maligned part of his game, his dribbling, looks more purposeful. Theo Walcott has scored nine goals now, including three against Reading without the same security behind him – but that game, characterised by abandon, makes it difficult to draw too many judgements from.

It’s apt that Wenger points to the important of his team-mates when evaluating Walcott’s credentials to play as a centre-forward because as a poacher, which is what his style would translate to if he makes that move, it depends entirely on the support he has behind him. Ultimately, that would be the main sticking point too, if he was to play as a number 9 regularly. Because not many teams play with a poacher these days and as such, central strikers need to possess other all-round skills if they are to survive there. Wenger indicates that Walcott doesn’t yet have those skills – to hold up play and bring others in the game – and one wonders whether he ever will. In this formation, the 4-2-3-1, Walcott is unlikely to get the chance to lead the line from the start but there is scope he will in a 4-4-2with Olivier Giroud or Podolski. 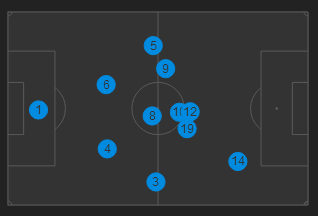 Nevertheless, Arsenal-Tottenham, showed the burgeoning relationship he has with Giroud and looking at where he mainly touched the ball, one can say Walcott was essentially playing as a striker – albeit one very wide. He was the highest player on the pitch and with the team’s centre-forward also acting as a pivot; it allows him to feed off Giroud’s knock-downs, as he did for Cazorla’s goal. Walcott’s crossing is more intelligent now too and looks like a result of work on the training ground.

Ultimately, though, Walcott might have to accept Capello was right, even if he doesn’t quite understand. The limited space on the field these days mean his pace might be more deadly, starting wide. If Arsenal pass the ball well, then room will always be created for him to run into, more so than where the space is more congested centrally.

Walcott’s role model might be Thierry Henry or Michael Owen and he might look at Javier Hernandez as the type of player he’d like to be. But a more realistic archetype of what type of player he could become might be goalscoring wide-forwards such as Cristiano Ronaldo or David Villa. It’s as Sir Alex Ferguson once said: “When forwards attack from wide to inside, they are far more dangerous. It’s funny when I see centre-forwards starting off in the middle against their markers and then going away from goal. Strikers going inside are far more dangerous, I think. When Henry played as a striker, and sometimes when Wayne [Rooney] does, they try to escape and create space by drifting from the centre to wide positions, when that actually makes them less dangerous.” Walcott would do well to heed to such words of wisdom.