Tactics column: Building from the back

It was unlikely that Mikel Arteta was going to cede penalty taking duties to Santi Cazorla, or Olivier Giroud for that matter. This was the responsibility that was given to him and he’s always repaid his manager’s faith in him. When he missed – or rather, when the penalty was saved by Mark Schwarzer – it felt almost inevitable. The invincible edge that Arteta has – that unflappable mentality when under pressure – for the first time in his Arsenal career, felt penetrable.

He had a difficult game. It’s true that he created Arsenal’s second goal but in a way, it almost felt as if it was forced; that he didn’t really want to be that high up the field. Throughout the match, Fulham had blocked his usual supply lanes and as such, Arteta’s passing never really carried the same purpose that it normally does. It got worse for Arteta when he was dispossessed at the edge of his own box by Bryan Ruiz and he contrived to bring the forward down for a penalty. Redemption was offered to him in the last minute from the spot but it just wasn’t to be his day. Which it needs to be, because the way Arsenal play, relies on Arteta to be on top form if they are to play well too.

Mikel Arteta is Arsenal’s main outlet from the back, the one who links midfield to attack. The one who keeps the pressure on the opponents by recycling possession. If he’s not passing it through effectively, the fluency of Arsenal’s game suffers. We saw that on Saturday and although Arsenal raced to a two-goal lead – just as they did against Schalke 04 – it’s agreed that it flattered them somewhat.

In fact, the 3-3 draw with Fulham was characterised by poor passing from the back by both sides. From Fulham’s perspective, with Chris Baird and Steve Sidwell in midfield, they lacked the technical quality to try and pick passes through. Arsenal on the other hand, were undermined by poor movement in front. To give the two sides credit, they kept a superb shape throughout the match only to be undone by moments of hesitancy or individual meekness. Santi Cazorla, as always, pressed with great intelligence while Bryan Ruiz kept tabs on Arteta.

On a wider issue, though, this has been bit of a problem for Arsenal. Because for a team who prides themselves on passing the ball better than their opponents, they have an inexplicable weakness to being pressed high up the pitch. Indeed, as Stewart Robson says, it’s widely accepted that there are two ways of playing against Arsenal; closing them down high up the pitch or dropping deep. By far, the best option is the former. But teams don’t have to do that these days – rather, it’s safer to do a combination of them both; remain compact and stop the passes into midfield.

Of course, this approach is true against any team – not many sides press intensely up the pitch anyway and organisation is the constant quality of any good defensive performance. But teams usually up their game against Arsenal and are more focused due to having prepared days in advance to face the peculiar threat of The Gunners. That’s compounded by an Arsenal team that, at the moment, look unsure of how exactly they should try and break down stubborn opponents.

What Arsenal tend to do then, when opponents stop them from getting into the midfield as they like, is to push the midfielders up the pitch and give room to the centre-backs to pass it out. “The teams close us down so much high up because they know we play through the middle,” said Arsene Wenger. “I push my midfielders a bit up at the start to give us more room to build up the game. I am comfortable with that but sometimes it leaves us open in the middle of the park. We want to play in the other half of the pitch and, therefore, we have to push our opponents back. But my philosophy is not to be in trouble, but to fool the opponent into trouble.”

What other top European sides will do, however, is to stretch the centre-backs across the pitch and drop a midfielder in. The idea is to make the pitch bigger to create openings to play. Neither approach is wrong; Wenger likes verticality in his play even if that doesn’t seem obvious at the moment. But there is a problem. Opponents are happy to let the centre-backs have the ball. Per Mertesacker offers little threat in possession from deep, Laurent Koscielny and Thomas Vermaelen are better. The other issue is that it puts Arsenal’s midfielders closer to the opponent’s midfielders if they push up the pitch and that makes it far easier to mark than if they’re far away.* The issue is resolved, though, if those midfielders alternate dropping deep and pushing forward so that it drags opponents out of position. Against Fulham, Arsenal didn’t do that.

*(As an aside, that highlights the importance of Arteta and why the player in that role must possess great technical ability because when they receive the ball, they’re under immense pressure). 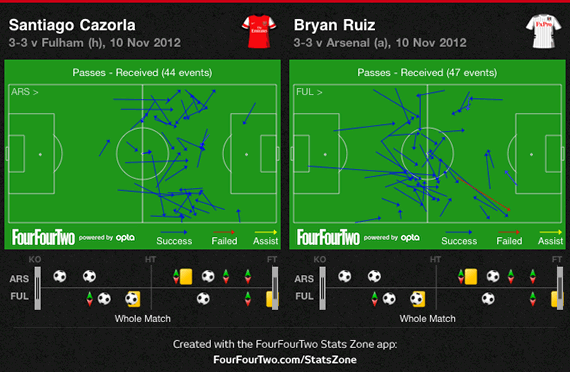 The ironic thing is that Fulham faced a similar sort of set-up in Arsenal’s defensive shape. But where they were better is that they looked to drop an extra midfielder in – usually Bryan Ruiz – to force Arsenal’s midfielders out of position. As a result, they got more joy in between the lines than Arsenal. Martin Jol wasn’t blowing his team’s own trumpet when he said that Ruiz was more dangerous than Santi Cazorla. Looking at where Cazorla received his passes in comparison to Ruiz, he rarely got the ball off his centre-backs.

Whatever the reason for Arsenal’s issues passing out from the back – and it’s not merely tactical as they’re evidently low on confidence – the selection didn’t help. There are certain imbalances in the squad, accentuated by injuries, and that surely had an effect. Francis Coquelin did a solid defensive job but didn’t offer too much in bringing the ball out the back; his misplaced passes were all in the opponent’s half.

Aaron Ramsey was horrendous when he replaced Coquelin, while playing with three strikers mean playing with players who prefer to get on to the end of things rather than start. Selecting Vermaelen ahead of Andre Santos was a bit baffling, especially at home because nothing came down the left-hand side. Arteta, in particular, had no reason to spread the ball wide to the left because Vermaelen was reluctant to get forward. 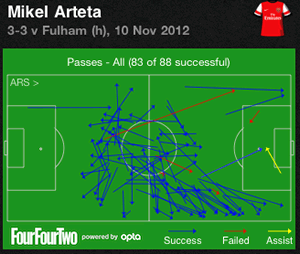 Wenger probably feels Santos’s vulnerability is symptomatic of the wider fragility in the squad. Certainly, he blamed the frailties in the defence at the end of the game but there is no doubt there is an intrinsic relationship between not moving the ball as well as they did earlier in the season as there is with the team suddenly leaking goals.

For Wenger, possession is valued for the chance creation possibilities. But if they’re not doing that well, teams will always believes there’s chances to get at Arsenal’s defence.